Mötley Crüe - Too Fast For Love 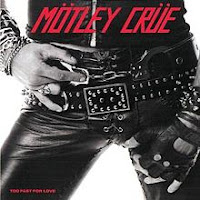 Formed in 1981, the quartet of hard-rocking musicians from Los Angeles known as Mötley Crüe cut a debut record called Too Fast For Love on a small label on November 10th of that year. That 900 copy run was enough to get them noticed and signed by Elektra Records, who helped them re-record and remix the record for a 1982 release. Despite an initial chart showing that reached number 77 on the US Billboard 200 charts, the record would eventually reach Platinum selling status.

The cover of the record pays homage (and a little parody) to the Rolling Stones’ 1971 album Sticky Fingers.


The only single released was the first track from side one - “Live Wire”. In 2006, the song was ranked number 17 on VH-1’s list of 40 Greatest Metal Songs of All-Time (not to shabby for a first release from a debut album). One listen and you can see why it deserves this honor. The opening guitars by Mick Mars and Nikki Sixx are full pedal-to-the-metal with Tommy Lee on drums keeping the pace. I think it is a fantastic starting point for the album.

The thunder keeps on coming with “Come on and Dance”. I always like a song that incorporates a solid use of cow-bell, and this one does.

“Public Enemy #1” has a sort of familiar preface to the chorus, but I can’t at the moment place it. Something with how Vince Neil sings those lines. Oh, and Tommy Lee is back with more cow-bell to boot at the end.

Things slow down a little with “Merry-Go-Round”. It has a good guitar solo in the later part.

The break doesn‘t last long though; “Take Me to the Top” turns up the heat once more. This one actually is more of a medium simmer though as it is less intense as the opening trio of tracks from the record.

Side two kicks off with “Piece of Your Action”. The song is a straight out advance towards a young woman, laying all intentions right on the line. It is a pretty standard rock number.

“Starry Eyes“ follows. I’ll admit that it isn’t as stand-out as some of the other tracks on the record. It isn’t bad - it rocks quite sufficiently. It just doesn’t have any added elements that make it very unique in my book. It is a filler track; every album has them.

The title track “Too Fast for Love” is next. This one tries to have a chant-along chorus, but it comes off weak. And that is sort of a shame. You’d hope that the title track would be a strong song, memorable. That isn’t the case for me on this one.

“On with the Show” helps redeem things a bit. It is a stronger track with which to end the record. The vocals are better than the last two as is the execution of the music composition.

Mötley Crüe combines elements of three different rock genres - the attitude of punk, the appearance of glam and the driving power of heavy metal. That combination helped the band make their mark in the early 80’s that would continue to grow as the decade continued. Personally, I was introduced to the band with their second album while in high school (my best friend was into Crüe). I certainly found the music enjoyable to listen to - they were hard-rocking enough without being all out screeching metal that tends to turn me off.
Posted by Martin Maenza at 5:32 AM

Great review! This is my favorite Crue album. I think it flows beautifully and quickly - the album is over before you know it. This album bleeds of innocence and youth of wild and crazy L.A. Thanks for the review!