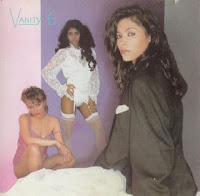 As Prince’s career was taking off in the early 80’s, he certainly had that old axiom in mind when put together a girl-group to sing songs about sex and fantasy while dressed in lingerie. The final line-up with the trio of Vanity (Denise Matthews), Brenda Bennett and Susan Moonsie certainly looked the part. Together they would be known as Vanity 6, the number referring to the total count of certain female anatomy of the trio.


In 1982, Warner Brothers released their self-titled debut Vanity 6 on vinyl and cassette. It peaked at number 45 on the US Billboard 200 chart and number 6 on the Billboard R&B chart; eventually it was certified Gold. In 1988, it was released on CD. Since then all formats have gone out of print. Today, new copies of the CD go for upwards of $50 with used ones starting around $16.

And the lyrics of the eight songs certainly reflect this as well. This is not an album for the timid or easily offended. These songs are full of in-your-face, let-it-all-hang-out attitude and sexuality. When he penned all these tracks, Prince was clearly channeling something he had not been capable of expressing in his own songs to date - a female viewpoint.

Side one opens with “Nasty Girl”. This second single from the album found a home on the US R&B charts and the US Dance charts (on the later it actually hit number 10) but it failed to break into the Billboard 100 charts due to the salacious nature of the lyrics. Yet popular, the song was used in the films Beverly Hills Cop and Private School. The opening rhythm with hand-claps sets up the slow-grind groove as the gals graphically detail what they want in a night of sex.

“Wet Dream” continues the revealing exploration of the female mind as she‘s worked into a frenzy over a certain guy. The music is very catchy; it gets into your head and leaves a permanent mark that won‘t come out.

“Drive Me Wild” was the B-side to the second single and then was released as the third single as well. This song has a major new-wave feel to it, with the synthesizers and syncopated drum-machine rhythm. The lyrics could be used as the backdrop for a phone sex ad as the singer coos a come-hither invitation.

“He’s So Dull” was the first single from the record, though it failed to chart. It was featured a year later in the film National Lampoon’s Vacation . The beat is very bouncy and the lyrics are a lot tamer than those of the first three tracks. If those were R-rated, this one is barely PG (if that). It has a 60’s girl-group feel to it with a bit of modernization for the 80’s.

The second side begins with “If a Girl Answers (Don’t Hang Up)”, a fun little story song that is mostly dialogue between the gals and Prince (pretending to be another gal) that turns into a back-and-forth game of “one upping”. The base line that plays behind this one is very funky. It is actually my favorite track from the album for some reason (I know the words by heart).

“Make-Up” appeared as the B-Side of “He’s So Dull” single. The new-wave sensibility is back again. The lyrics about applying cosmetics before an evening out are delivered in a cold, emotionless way as if the young woman was some kind of automaton.

“Bite the Beat” was the fourth and final single. This one has a nice upbeat tempo reminiscent of tunes by the B-52’s and others. Despite its less than obvious references to oral sex, this is definitely a good tune to dance to.

“3X2=6” closes the record; it appeared as the B-side to both the third and fourth singles. Unlike the other songs where the protagonists are outgoing, the singer of this gentle ballad is a bit more reserved. Prince’s signature guitar wailing can be heard as a solo about midway through.

To support the album, Vanity 6 opened for the Triple Threat Tour that also included the Time, and of course Prince as the headliner. While Prince was responsible for all the instrument performances and production on the album, on the tour he had the Time covertly perform as the girls’ backing band from behind the curtain. For that set, he wanted all attention focused on the lovely trio.

Due to dissension among the band members and Vanity’s break-up with Prince, the original line-up fell apart. Prince would eventually replace her with Patricia Kotero who took the stage name of Apollonia. Along with Bennett and Moonsie, the new trio went by Apollonia 6 when they appeared in the film Purple Rain.

During the summer of 1982, between my junior and senior years of high school, I was very much into all things Prince. I simply could not get enough of this new artist that I had discovered. The first place I heard these tracks from Vanity 6 was the same place I had been exposed to Prince a year or so earlier - from the local college radio station. Unlike conventional radio, the college stations were a little bit freer to play racier material. The local station played Vanity 6 a lot!

I purchased Vanity 6 on vinyl and played very often, mostly in my room with my headphones on. As a seventeen year old boy who was discovering his own sexuality, this record was a prize to be cherished. Chalk it up to hormones in over-drive, but this music was a part of the soundtrack of those next few years for me.

Sex sells.
Posted by Martin Maenza at 5:28 AM