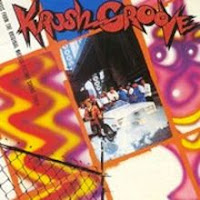 In October of 1985, Warner Brothers studio released the film Krush Groove that was loosely based on the early days of Def Jam Recordings and record producer Russell Simmons (played by Blair Underwood). The record label in the film was called Krush Groove, with over a half dozen real-life musical artists (playing themselves) as the various acts on the fictious label.


I remember very clearly when this movie came out. It was the fall of 1985 and I was in the middle of a six-month co-operative working assignment in New Jersey. Part of my computer science degree included working in the field while still in college. This assignment fell between my sophomore and junior years of college. At the time, I was going to see lots of movies on the weekend and, since I was a fan of a number of acts in the film, I went to see Krush Groove the weekend it opened.

The soundtrack album for Krush Groove peaked at number 79 on the Pop charts and number 14 on the R&B album charts. It included a great mix of music that featured many of the film’s stars.

Chaka Khan lends her powerful R&B voice to “(Krush Groove) Can’t Stop the Street”. She was one of the first singers to do collaborations with rappers, a style that is very common in today’s Top-40 music. Her first time was on the Top-10 hit “I Feel For You” with Grandmaster Melle Mel a year prior, and here she is doing it again. That alone makes Chaka a pioneer. The song has a decent dance beat, perfect for the clubs or some free-style popping and locking on the street corner.

Next is LL Cool J’s “I Can’t Live Without My Radio”, an ode to his boom box. Back in the day, bigger was better and it often took 8 or more D-cell batteries to power these 20 plus pound sound systems. This film and soundtrack was LL’s first exposure to the public; his own album Radio came out a few months later and also included this track. It shows how talented he was at a very young age (17); his rhymes are smooth and varied and the beats are infectious.

Kurtis Blow provides “If I Ruled the World”, another of his intelligent social commentaries. He can also sing so his songs have a nice bit of melody to them, especially the chorus. That makes his style refreshing.

“All You Can Eat”, a signature song for the rotund rappers known as the Fat Boys, is next. Their rap style combined comedy and self-references; they had no problem with using their weight as a theme for their music. You should sing about what you know, right? They also use some amazing human beat-box techniques, another signature element of their music.

Adding a little bit of straight dance music to the record is Debbie Harry with “Feel the Spin”. Of course, she’s no stranger to world of rap. She and Blondie did Rapture back in 1980, and she also did a few raps on her first solo album a year later. This track is pure dance with a bit of a Latin beat and some nice guitars too. “JellyBean” Benitez and Toni C., both renowned deejays, were the producers on the track.

The Beastie Boys are next with “She’s on It”. This was the debut single for the young rappers and the film was their first exposure to the record buying public. This song has a nice rocking sound to it that I like quite a bit. I can certainly see how they attracted the attention of Def Jam Records with initial offerings like this one.

The Gap Band provides a very up-tempo dance track with “Love Triangle”. The guys get some very interesting synthesizer sounds going on this one. I’m still trying to figure out what the dog barking is there for.

Things slow down with the ballad “Tender Love” from Force MD’s. The smooth R&B group were on the Tommy Boy record label; this song helped sky-rocket their second album Chillin’ up the charts. "Tender Love" went to number 10 on the Billboard Hot 100 as part of its nineteen weeks in the countdown. The song, written by former members of the Time Jimmy Jam and Terry Lewis, was the slow-jam for many months after the film; you would hear it every night at the clubs. It was perfect for holding that special someone close. Hearing it again brings back a lot of great memories.

Finally, a number of the film’s acts (Run-D.M.C., Sheila E., Kurtis Blow and the Fat Boys) team up as the “Krush Groove All-Stars” for the finale song “Krush Groovin’”. It has a decent beat to it that blends the various vocal styles quite well. Sheila provides a softer side to all the guys and their aggressive raps.

I picked this record up on vinyl in December of 1985, right after I got back to college and my turn-table (I had only brought a boom-box with me on my New Jersey work assignment, due to space considerations). I really like how this album had a variety of music, from both old favorites and rising newcomers. If you're a fan of the early days of rap and hip-hop, this is one you should check out.
Posted by Martin Maenza at 8:49 AM