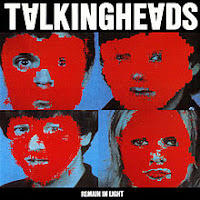 For their fourth studio album, the American new wave band Talking Heads turned to long time collaborator Brian Eno to produce it. This proved to be a smart move as 1980’s Remain in Light did very well with consumers and critics. The record went to number 19 on the US Billboard Album chart and number 21 on the UK Album charts. Remain in Light was named best album of the 80’s by Sounds and Melody Maker publications. Rolling Stone put it at number 4 on its 100 Best Albums of the 1980’s list and number 126 on its 500 Greatest Albums of All Time list. The Guardian in the UK ranked it number 43 on its list of 100 Best Albums Ever.


Side one opens with “Born Under Punches (The Heat Goes On)” with its funky groove. David Byrne’s vocals are erratic and supplemented with a tribal chant chorus and experimental synthesizer sounds. The end of the song has an extended section where the phrase “and the heat goes on” repeats until the fade out.

Next up is “Crosseyed and Painless” with its up-tempo rhythms. The lyrics have an edgy feeling to them, accented by the funk guitar riffs.

“The Great Curve” has some solid, Afro-centric percussion to it thanks to Chris Frantz and Tina Weymouth. The squealing guitars by Adrian Belew also give the song an interesting sound. It is a nice close to the first side that has a very rhythmic approach to it.

Side two opens with “Once in a Lifetime”. This first single went to number 14 in the UK and number 28 in Canada; in the US it fell short of the Hot 100 by topping out at 103. Despite that, the song found a home on many album-oriented rock and college radio stations and its video was a mainstay in the early days of MTV. I like this song with its lyrics about self-examination; the singer wonders how his life has gotten to the point it is at. The cascading sounds of the opening set the tone nicely; it emulates flowing water perfectly.

“Houses in Motion” is the second single from the record; it only managed to chart in the UK at number 50. The groove on this one reminds me a lot of 1960’s R&B or soul songs. The vocals are more muffled in a lower tone. Together, it gives the impression of someone just moving through life without any meaning or purpose.

“Seen and Not Seen” is a very odd track in its meter and pacing. The lyrics are spoken as if delivered at a beatnik poetry reading. The ideas proposed by the lyrics are that someone, through sheer will of mind, over time could change their own appearance.

“Listening Wind” drops back to the African sounds with a story of a native named Mojique who sees how his world has changed since the arrival of the Americans. He takes action into his own hands to drive them out. I like the mood of this one, very somber and unemotional.

At six minutes long, “The Overload” is the second longest track on the album. Lyrically, it is the shortest with only twenty four lines. The music is the star on this one, with an ominous, dirge-like tone. This song is right at home with the darker new-wave sounds of some of the European bands like Joy Division, Bauhuas, and Siouxsie and the Banshees.

I didn’t get the Talking Heads or this album when they first came on the scene. My interest was peaked by them during my early college years (1984, 1985) when I was more likely to hear their music coming from stereos around the dorm or at floor parties. I can certainly see the appeal of this record; the music and styles they employed was not typical of what was going on around the US music scene at the time. For that, it certainly makes the record ground-breaking.
Posted by Martin Maenza at 5:15 AM

Seriously, this was one of the worst albums I've ever heard. I'm trying to listen to the RS's 500 greatest albums of all time, and I got to this one and I wanted to claw my eyes out and up my anxiety medication. I probably don't know what I'm missing because my ears aren't tuned in to pick up all the little things that make it rock...that's fine by me! You have a cool blog!! I'm glad I found it!!

Katy, glad you found my blog and thanks for the comments. Keep them coming. They are always welcome. Doing the RS 500 is a great goal. I have a great many there I have never heard all thru myself.