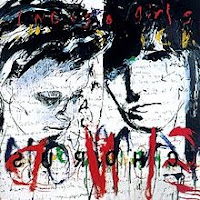 Today marks the 21st wedding anniversary for my wife Terri and me. When I asked her to suggest an album for me to review, she chose the Indigo Girl’s third studio album Nomads Indians Saints. Not so coincidentally it came out in 1990, the year we were married. So, I’m dedicating this album review to her and our marriage.

The Indigo Girls are an American folk rock duo hailing from the Atlanta, Georgia, area. Amy Ray and Emily Saliers began performing as students at Emory University before getting a contract with CBS Records. Both women identify themselves as lesbians, though they are not a couple. They are very active in causes both political and environmental.


Nomads Indians Saints went to number 43 on the Billboard Album charts and was certified Gold within a year and a half from its release Rolling Stone magazine gave the album a four out of five stars rating.

Side one of the album opens with “Hammer and a Nail”, the only single from the album (it went to number 12 on the US Mainstream Rock charts). This is one of my wife’s two favorite tracks on the record. The song has a great message about taking life into your own hands and taking responsibility in making things happen. We can’t just sit around thinking about it; we have to do it.

“Welcome Me” opens with some kind of lone bird call. Along with the guitars, it sets a somber tone for this track. I really like the acoustic slide guitar played by John Jennings on this one; it helps give it a nice country feel.

The harmonies of Amy and Emily shine through on “World Falls”; I really love how their voices play off of each other. The album’s title comes from the line “I wish I was a nomad, an Indian or a saint”.

“Southland in the Springtime” also has a nice country feel to it. Craig Edwards on the fiddle blends with Amy, Emily, and Jennings on the acoustic guitars. The lyrics paint a beautiful picture of traveling across the South as the band returns to Georgia from Texas.

“1 2 3” has a nice edge to it in the words and the accompaniment. This is contrasted nicely with the almost nursery-rhyme like counting chorus.

The side ends with the gentler “Keeper of My Heart”. Amy performs this one solo, with both the vocals and guitar. This song seems very personal, perhaps written from Amy’s own experiences. You can hear the emotion in her voice and it grips you.

Side two starts with “Watershed”, another of my wife’s favorite tracks from this record. I really like the acoustic guitar opening on this one as it reminds me of cascading water across a rocky stream bed. The song is about someone facing a crossroads in their life, trying to move beyond tragic events of the past and finding a worthwhile future.

Kenny Aronoff provides the African drums beat to “Hand Me Downs”. I really like the guitar work on this one too.

Emily takes lead on “You and Me of the 10,000 Wars”, one of the songs she wrote for the record. The lyrics tell of conflicts in a relationship and moving forward after them. The imagery of the lyrics is quite beautiful.

“Pushing the Needle Too Far” is next. The lyrics speak to losing your way and coming to realize you’ve gone too far. It seems very much an observation of the world around them.

The album ends with “The Girl with the Weight of the World in Her Hands”. Their usual acoustic guitars are supported by a full string section arrangement, giving the song a much larger feel to it. In ways, it sort of reminds me of the Beatles’ “Eleanor Rigby”.

While I was fairly familiar with a couple of the songs from this one (my wife’s two favorites which I just happened to have in my own iTunes library), the rest of Nomads Indians Saints was fairly new to me until this listen. The Indigo Girls happen to be one of my wife’s favorite bands; I’ve listened to some of their music in the car with her when she’s driving and I’ve seen the band in concert with her as well. I may have been the only male at the concert but I enjoyed the music a lot.

I found the whole album to be a pleasant listening experience, and I've already pulled the full disk into my library this week.
Posted by Martin Maenza at 5:36 AM