U2 - The Joshua Tree 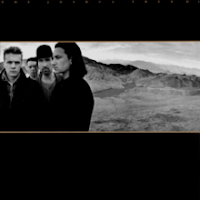 There is no disputing the popularity of U2’s fifth studio album, 1987’s The Joshua Tree. The record has sold over 25 million copies world-wide, and it went to number 1 on the album charts of over 20 countries including the US and the UK.

Critically too the album was well received. In 1988, it won the Grammy Awards for Album of the Year and Best Rock Performance by a Duo or Group with Vocal. Rolling Stone magazine ranked it as number 3 on its Top 100 Albums of the 80’s list and number 26 on its 500 Greatest Albums of All-Time list. VH1 ranked it at number 15 on their 100 Greatest Albums of Rock & Roll list.


Side one opens with “Where the Streets Have No Name” and an unforgettable guitar hook by the Edge. The lyrics reflect Bono’s thoughts about Belfast, Ireland, where a person’s religious affiliation and economic status are often reflected by the street upon which they life. By singing about streets with no name it would seem he is hoping for a future where those divides among the classes will no longer exist. It has parallels then to Martin Luther King Jr.‘s “I Have a Dream” speech. This third single from the album went to number 1 in Ireland and New Zealand; it went to number 4 in the UK and number 13 in the US.

The second track is “I Still Haven’t Found What I’m Looking For”; as the second single it scored a number 1 in Ireland and the US with a number 6 position on the UK charts. Again, we get another unforgettable opening. The song’s verses paint the picture of a journey both physical and spiritual, a quest for something that the singer hasn’t yet attained. Larry Mullen Jr.’s drum beats keep a perfect timed march.

“With or Without You” was the first single and the best selling one from the album. It went to number 1 in Ireland, Canada and the US, number 2 in New Zealand and number 4 in the UK. The beautiful lyrics describe a troubled relationship between two lovers. Whenever this song comes on the radio I find myself singing right along with Bono. I think we’ve all be there before, in a situation where this song just resonates with our own emotions at the time. The last minute or so as the instruments plays out is amazing. The whole song is very raw and universal.

With an opening trio of tracks like that, this album could not go wrong. Together they are a powerful set, but they are just the beginning.

Politics shine through with “Bullet the Blue Sky”, a song about the US military’s involvement in the El Salvador Civil War. The music sets a very specific tone, dark and gritty; this is great work by the Edge, Adam Clayton on bass, and Mullen.

“Running to Stand Still” creates a different kind of picture. This slow ballad has a simpler piano and guitar composition, while the lyrics describe a heroin-addicted couple living in poor housing in Dublin. At one point, Bono’s voice reminds me that of Bruce Springsteen.

Side two begins with “Red Hill Mining Town”, a look at how the National Union of Mineworkers strike affected the families of the miners. As the lyrics say, in times of unemployment all we often have to turn to for support is those in our own household.

“In God’s Country” was the fifth single; it went to number 48 in the UK, number 44 in the US and number 25 in Canada. The band drops in a more up-tempo track after the previous two slower ones. The lyrics allude to the Statue of Liberty in the second verse while the rest of the song implies the US is like a rose in the desert, torn apart and faded.

Bono opens “Trip Through Your Wires” on harmonica. The song has a slight blues saunter to it. The lyrics describe a man who is beaten and broken yet who finds salvation of sorts.

“One Tree Hill” was written in memory of Bono’s personal assistant Greg Carroll, whom the album is dedicated to. This sixth single was released only in New Zealand, Carroll’s homeland, and it went to number 1. It has a very somber ending to it that is fitting tribute to the departed friend and colleague.

“Exit” was the fourth single and it too only charted in New Zealand (it reached number 46). The soft-opening commands your attention immediately. As each minute passes, the song grows in power and volume. I really like the mood it creates and how it is so different from the previous tracks before it.

The final track on the album is “Mothers of the Disappeared” and was inspired by U2’s involvement with the Amnesty International programs in Central and South America. Once more, we get a different and interesting sound (this time with the help of a Spanish guitar) to set the mood. Lyrically, the composition is different too with four verses and no chorus. Three of the four verses do share a repetition of two lines though.

I must admit that back in the 80’s I wasn’t a major U2 fan. I knew the hits of their various albums but I wasn’t readily inclined to pick up their albums.

It is only as I’ve gotten older, in the past fifteen years or so, that I’ve come to understand and appreciate the full albums by the band. I can certainly see why The Joshua Tree, for example, was such a well-received album. The eleven tracks are all unique, interesting and multi-layered - the kind of music that is well-served by repeated listening.
Posted by Martin Maenza at 5:21 AM

For me, one of the fascinating parts about The Joshua Tree is that it marked the end of an era. U2 had been an earnest anthem-producing band that kept on creating bigger and bigger anthems. After the success of the Joshua Tree, there was really nowhere else to go, so U2 slowly tore themselves apart and reinvented themselves (my favorite album from this post-Joshua Tree period was their Passengers collaboration with Brian Eno).

I can certainly see that is the case. This one definitely was like the earlier stuff from them, but bigger.

This was an amazing statement back when it was released. In the height of the flash neon 80's, U2 delivered a stark contrast. The album cover says it all. I am not and will never be a huge U2 fan, but they had their moments. This was huge.

My favorite U2 album is actually "Zooropa". It is totally opposite of this album, but in many ways I think it made a similar statement of the current time of release, and Johnny Cash is simply beautifully haunting in the last track.