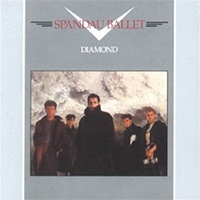 On May 25th of 1982, the British band Spandau Ballet released their second studio album Diamond, which went to number 15 on the UK album charts and was certified Gold.

Like their first release, this one too was produced by Richard James Burgess, a noted studio drummer and computer-music composer. Burgess’ style helped the band to become one of the leaders in the New Romantic sound of the early 80’s.


Side one opens with “Chant No. 1 (I Don’t Need This Pressure On)”. This first single from the record was released almost a year prior to the full album. It went to number 3 on the UK charts. The song features funky guitars (from Gary and Martin Kemp), driving percussion (from John Keeble), thundering horns (thanks to Beggar & Company) and smooth vocals (with Tony Hadley on lead). The combination makes for an unforgettable musical gem. What a way to kick off a record!

“Instinction” was the fourth single from the record, making it to number 10 on the UK charts. It continues the up-tempo party begun by the first track. Hadley’s vocals are quite powerful here. I just saw the video for this one for the first time this week - incredible editing on it.

The second single, “Paint Me Down”, peaked at number 30. I really like the guitars on this one as well; the whole song has a very sexy sound to it.

“Coffee Club” has a different sound to it thanks to an irregular rhythm. The drums between the verses remind me of the accompaniment for a beat-poet in a coffee house. It definitely provides a stand-out closer for the first half of the album.

The second side starts off with “She Loved Like Diamond”, the third single which went to number 49. I like the symbolism in the lyrics on this one a lot, and the sound on this one gives a little of a hint of what was to come on the next album. The video is very interesting too, haunting.

“Pharaoh” opens with Gary Kemp on piano. Then the rest of the band comes in, giving the song an exotic Egyptian feel. I like the longer instrumental opening (two minutes) before the somber vocals come in. Even then, the music is the star on this track.

“Innocence and Science” features sounds of splashing and dripping water, along with what sounds like a Japanese string instrument. The vocals are very subdued and introspective.

This leads directly into “Missionary”, the last track and the longest. The percussion here begins slowly with an ominous tone. It then builds as more musical layers and the vocals are draped atop it. Like the previous two tracks, this one too has foreign, exotic touch to it. Together, they make the second side into an intriguing musical suite.

The first singles and the album came out during my junior year of high school, a time when I was getting into listening to the local college radio station. It was that outlet that first exposed me to Spandau Ballet along with a number of other acts from the UK. I was an instant fan and have been ever since!

I got into the full Diamond album a few years later, after the next two albums of the group became permanent fixtures on my turn table. I really enjoy the earlier musical directions that the band was exploring with this record.

I recently saw a video of the performance celebrating the 30th anniversary of the release of “Chant No. 1 (I Don’t Need This Pressure On)”. The band sounds amazing even after three decades having passed. If they ever came back on a tour of the US, I definitely would want to go and see them live.
Posted by Martin Maenza at 5:22 AM