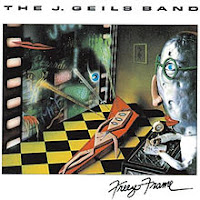 In the fall of 1981, which corresponded to the start of my junior year of high school, the J. Geils Band released their twelfth album Freeze-Frame. The band from Massachusetts had been around for a little more than a decade by this point, but this release would be their first to go to number 1 on the Billboard 200 Album charts (where it stayed on top for four weeks) and the first to be a Platinum seller.


The first side opens with the title track "Freeze-Frame". As the second single from the record, it cracked the top 10 of the Billboard charts, climbing all the way to number 4. The lyrics tell of a photo shoot on Tuesday that leads to a burning week-long fantasy in the photographer’s mind. The opening camera clicks and Seth Justman’s keyboards instantly pull me in. I really like the use of hand-claps on this one too. This was a big party starter back in the day as well as popular at the school dances.

The horns of Magic Dick (born Richard Salwitz) herald in the start of "Rage in the Cage". This high energy rocker expresses the frustration of a blue-collar retail worker. Only the love of sweet Diana can help sooth his fury. This one always gets me pumped up - between the fast-paced vocals, the driving beat and the wonderful guitar and horn solos.

"Centerfold" was the first single from the album; it spent twenty weeks on the Billboard charts including six weeks at the number 1 spot. In the UK, the record went to number 3. The lyrics tell the tale of a man who finds out his high school crush has appeared naked in a men’s magazine. Again, this is another classic 80’s opening that you know instantly by the first few measures. I know the words by heart, from singing along with the band many times (not to mention it being a must-have for our Rock Band 3 set lists). This was another favorite at dances back in the day too; it is a wonder the school let us play it with such “adult“ themes.

"Do You Remember When?" has an exotic, almost Bond-like sound to it. The song tells of the recollection of a past relationship and the void it has left in the singer’s life. I really like the sounds that they get on this one, especially during the long solo in the middle of the song and then the echoing effect at the very end of the song.

"Insane, Insane Again" is such a crazy tune. The opening is like a circus calliope gone wild, and the lyrics are spit forth like a paranoid, raving stream-of-consciousness rant. The repetitive “relax relax” is as if delivered by a chorus of nurses brandishing sedatives. I really like this track a lot as it shows so much musical creativity.

The second side starts off with my favorite track on the album "Flamethrower". The song tells the tale of an average looking woman who works all day in a repressed job (perhaps an office) but at night she becomes a totally different person when she lets her hair down and parties. While it did not make the Billboard singles chart, it did manage to get to number 25 on the Hot R&B Singles chart. It has an amazingly funky dance beat to it (thanks to Stephen Bladd’s drums) and those oh-so-sexy horns. This was a must-play for any party mixes I was putting together back in the day; it was perfect to keep the energy high and crowd moving.

"River Blindness" is next. The lyrics on this one are a little more of the cryptic side, I think that might be why this is my least favorite track on the record. All the others are fairly straight-forward and fun.

"Angel in Blue", the third and final single, only lasted two weeks on the Billboard charts and maxed out at number 40. This number is a bit slower than the rest with its swaying beat. The story tells of a table dancer who sadly realizes her chances for true love are long gone. I remember this being a very unlikely slow-dance song back in the day (I guess we weren’t really listening to the lyrics by the end of the night).

That high energy is back for the album‘s final track "Piss on the Wall". J. Geils’ guitar is grinding, and Peter Wolf’s vocals are scathing. The song has such attitude and disregard for what is going on in the world. I remember always getting a kick out of this one, just because of its references to taking a wiz. Yeah, teenage guys find bodily function humor hilarious; sometimes you just don’t out grow that.

Freeze-Frame has been a favorite album of mine for the last thirty years. My older brother had it on vinyl, but I quickly made a cassette copy for myself. I remember the party I threw senior year at our house; I threw that whole album on and we all partied to both sides. Great times.

I love nearly all the tracks even to this day; I think it has aged pretty well and does not sound very dated at all. The album is not only on my iPod but I also have it on my iPhone and iPad. It would be one of the albums I’d want to have with me if I were stranded on a desert island. Very solid and always puts me in a great mood.
Posted by Martin Maenza at 5:47 AM

I was a couple of years younger when the album came out. The local rock radio station where I lived at the time would play album tracks by rock artists. When I heard this one Thought it was great.