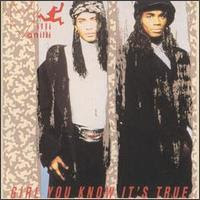 Any fan of 80’s knows the story of Milli Vanilli, the pop music project created by Frank Farian in 1988. The actual vocals on the record were done by Charles Shaw, John Davis, Brad Howell and twin sisters Jodie and Linda Rocco. Farian didn’t feel the singers were visually marketable though so he hired Fab Morvan and Rob Pilatus to “front” the group. Their debut release went to number 1 on the US Billboard Album charts and the Canadian charts; it sold over 6 million copies in the US alone. It also produced five chart-smashing hits. The “group” skyrocketed to international fame that included the Grammy Award for Best New Artist in 1990, and then their world crashed down upon them when it was revealed that the two front men did not actually do the lead vocals on the record and would lip-synch in all public performances and videos. The Grammy was subsequently revoked. All of this was detailed in VH-1’s Behind the Music series.

Despite all of the deceptions, I actually enjoyed Milli Vanilli's debut record which in the US came out in 1989 as the album Girl You Know It’s True. Since my blog most often focuses on music, I want to do just that - look at the tracks that made up this record.


Side one kicked off with the first single “Girl You Know It’s True”. In the US, the song spent fifteen weeks on the charts and reached the number 2 spot. The song opens with a spoken interchange between a couple. It then kicks in with an infectious dance beat. I love the ratta-tat-tat on the drums, courtesy of Curt Cress, and the cuts-scratches done on the vocals too. Charles Shaw delivers the raps on this one.

“Baby Don’t Forget My Number” was the second single in the US; it spent fourteen weeks on the charts and went all the way to number 1. The singer pleads to his lover that she can always call him any time. The rhythm is very bouncy. Again, this has got such amazing production which made it an irresistible dance track at the time. I also like the reference to the classic “Pennsylvania 6-5000”, a 1940’s big band hit.

“More Than You’ll Ever Know” continues the funky dance party, with the vocals having more of an R&B flavor to them. The horns by Mel Collins, D. Solera, F. Civitareale and F. Weyerer give it a really nice groove. The song tells of a woman who is about to leave her man, a man who professes how much he truly loves her in hopes to change her mind.

“Blame It on the Rain“, which was written by Diane Warren, was the fourth single in the US; it too spent fourteen weeks on the charts - two of which were at the number 1 spot. The lyrics speak of a failed relationship, and the singer suggests pushing the blame on something else. The song is very catchy, especially the chorus, and the title has become a pop culture reference that survives over two decades later.

“Take It as It Comes” was written by the duo known as Climie Fisher (Simon Climie and former Naked Eyes keyboardist Rob Fisher) who had a couple of International hit singles themselves. The song has a nice pop bounce to it, but it really pales in comparison to the four tracks that preceded it. I definitely think it is the weakest of the first side songs.

The second side starts with “It’s Your Thing”, a cover of the 1969 Isley Brothers song which peaked at number 2 on the Billboard charts and went to number 1 on the R&B charts. The Milli Vanilli version modernizes it with synth and drum-machines as well as some raps while still maintaining the original‘s funky roots. I think they did a good job on it.

The ballad “Dreams to Remember” has smooth, mid-tempo jazzy sound to it. That definitely makes the song stand-out from the other tracks.

“All or Nothing” was the fifth and final single released in the US; over ten weeks on the chart it peaked at number 4. It has a similar rhythm to “Girl You Know It’s True” which made it perfect for deejays to mix the two songs for an extended dance set by the group. The lyrics name-drop George Michael and Marvin Gaye as mood setters for a night of all-out passion between a couple in love.

“Girl I’m Gonna Miss You” was the third single; it too was on the US charts for fourteen weeks that included two weeks at the number 1 spot. This ballad is smooth and features the Rocco twins prominently in the harmonies. This was a go-to slow dance song in 1989.

The album closes with an extended remix of the opening track “Girl You Know It’s True”. Dubbed the NY Subway Extended Mix, this version features longer instrumental sections and a bit more vocal scratches. You can even hear a little “yeah boy!” ala Flava Flav in the mix.

I had this one on cassette back in the day and enjoyed it a lot. As noted, many of the tracks were club favorites that we danced to often as they were very popular. Sadly, because of all the bad publicity due to the exposure of the true nature of the group, Arista records has pretty much pulled the record. That means you can’t get the original versions on CD or as downloads (you can buy re-recorded versions by the original musicians though).

Thanks again to Grooveshark for allowing me to hear the original tracks as they were released though. Sometimes you just want to hear the song as you remember it.
Posted by Martin Maenza at 5:22 AM