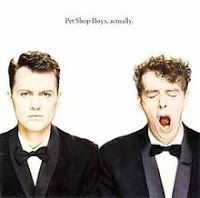 Following their Platinum selling debut the previous year, the Pet Shop Boys released Actually in 1987 to an equally great reception. This album too went Platinum in a number of countries, including the band’s native UK, Canada, Finland and Germany. It went to number 1 in Finland and Germany, number 2 in the UK (60 weeks total on the charts) and Sweden, and number 25 in the US (45 weeks total on the charts).

Neil Tennant and Chris Lowe did not vary the musical styles that brought them success with Please. They also continued to supplement their own electronic synth sounds with some guest musicians. The record produced four singles as did its predecessor. The production values, however, on the new tracks were much higher than that debut release.


“One More Chance” is the first song from side one. Originally released as a single in 1984, the band re-recorded it for this album. This dance track features of nice tribal drumbeat as a foundation with lots of layers built atop of it. The lyrics are full of urban, sexual energy as the singer pleads for one more opportunity to make a relationship work.

The next track is “What Have I Done To Deserve This?”, a duet with the 60’s music sensation Dusty Springfield. As the second single from the album, it went to number 2 in the UK, the Netherlands, Sweden and the US, and number 1 in Ireland. I’ve always liked the lines that come before the choruses; their delivery of their inquiry just sticks with me.

“Shopping” opens with a heavy keyboard line and a bit of a funky rhythm. The song is sprinkled with electronic vocal effects that were very popular in a number of the R&B and dance tunes at the time. The lyrics refer to finding the right buyer for information.

The third single, “Rent”, peaked at number 8 in the UK but did not chart in the US. The rhythm again is another change up from the previous ones, keeping the songs fresh. The lyrics tell of a willing kept man, given everything he needs to live in exchange for love.

The lyrics of “Hit Music” hint at a relationship where any problems are buried beneath good times and dancing. It has an industrial sound to the instrumentation that reminds me a bit of the Art of Noise. I like how this one moves, like strobe lights flashing about erratically over the dance floor, and how the tempo slows as it nears the end (a nice way to close out the side).

The second side starts off on a slower note with “It Couldn’t Happen Here”. The music sets a sweeping, somber tone for the tale of a couple whose life takes an unexpected downturn. I’ll be honest and say this song is a bit of a downer for me and such is not a favorite track.

“It’s A Sin” was the first and highest charting single from Actually. It was a top 10 hit on all the major charts in Europe, reaching the number 1 spot in the UK, Austria, Germany, Ireland, Sweden and Switzerland. Here in the US, it reached the number 9 spot on the Billboard charts. The lyrics describe the Catholic upbringing of Tennant and include samples from masses in Latin along with sweeping organ music and thunderous storm effects. Overall, it has a nice dramatic feel to it that I really appreciate.

“I Want To Wake Up” keeps the dance tempos coming. I love the nod to Soft Cell in the lyrics. The repetition of the “wake up” and “ooh ooh ooh oh oh” lines for the last few minutes of the song really add to the whole dream aspect of the song, that feeling you have when you are fighting to get out of a dream.

“Heart” was the fourth and final single from the album. It went to number 1 in the UK, Germany, Ireland and Switzerland. While popular in dance clubs, it did not chart the US and that’s a shame. I really like the groove on this one. The lyrics are simple but the production value on it really elevates the track to a dance floor classic. I have a six minute remix version of this on in my library as well and I really can get a good workout from it. It is perfect for cardio.

The record closes out with “King’s Cross”, a song set at a rail station in London. I like the sounds of the passing trains that can be heard amidst the music through out.

In 2001, Actually was re-mastered and re-released on CD format. It included a second disk with remixes of some of the above songs as well as other B-Sides and demos that the Pet Shop Boys had done around that time. That version is one that any true PSB fans would want to pick up.
Posted by Martin Maenza at 5:21 AM