The Doobie Brothers - Minute By Minute 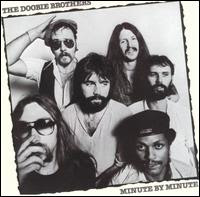 The American rock band out of San Jose, California, known as the Doobie Brothers have been making music since 1970. Their sound has been labeled things like “roots rock”, “country rock” and “swamp rock”, but to me it is all good music. Their mix of rich music and great harmonies are their trademark.

I know that the band was somewhere in that musical backdrop as I went through my elementary school days of the early to mid-70’s. Their songs were played on the radio that we listened to in the car or around the house. But it took their appearance on a two-part episode of the ABC sitcom What’s Happening in 1978 for me to get my first visual look at the Doobies. Remember, this was the days long before music television. The only place to see bands were on afternoon or late evening talk shows, the occasional variety show appearance, or possibly on American Bandstand.


The album Minute By Minute, their eighth studio album was released on December 1st of 1978. It went to number 1 on the Billboard 200 album charts in April of 1979 where it held the spot for two weeks (after bumping out the Bee Gees Spirits Having Flown and then another three weeks (followed by Supertramp’s Breakfast in America). The CD version rearranged the tracks some. I am going to break it down by the original vinyl release song order.

The first side opens with “Sweet Feelin’”, a softer track that features guest vocals by Nicolette Larson in a duet with Patrick Simmons. The song is a celebration of a new love.

“Open Your Eyes” is an up-tempo track that questions whether a lover’s feelings were ever genuine and true, or was it merely two people caught up in the heat of the moment.

“Dependin’ on You” was the third and final single from the record. It spent six weeks on the Billboard charts and peaked at number 25. Larson is back on guest vocals along with Rosemary Butler, adding to the richness of the vocal harmonies. I really enjoy this song. It speaks of that synergy between a couple, where one person fills in those areas where the other one might be lacking. I like the up-beat rhythm on this one as well.

“Here to Love You” has a rousing piano and a steady rhythm section. The song is a simple but powerful declaration that the singer is making the woman is number one priority. I like the saxophone solo on this one by Andrew Love.

“Minute by Minute” spent nine weeks on the Billboard charts and went all the way to number 14. This one has a memorable base line by Tiran Porter, in a smooth jazzy kind of way. I always liked the way the chorus and the drum parts mimic the sound of the second hand ticking on a watch or a big old wall clock.

Side two begins with “You Never Change”, a nice soul groove. The lyrics again are about a relationship, but this time the singer finds out that his woman is up to her former tricks and that any appearance of change in behavior was just an illusion.

“What a Fool Believes” was co-written by Kenny Loggins and Michael McDonald. The song spent fourteen weeks on the Billboard charts, including one week at number 1. The song won the 1979 Grammy Awards for Song of the Year and Record of the Year. The lyrics tell the tale of a man who tries to rekindle the relationship with a former lover, completely unaware that she never really loved him to begin with. This one has an unforgettable dueling synthesizer line by McDonald and Bill Payne.

The instrumental “Steamer Lane Breakdown” has a rambling country sound that showcases Jeff “Skunk” Baxter on the steel guitar and guests Herb Pederson and Byron Berline on banjo and fiddle respectively. This album was Baxter’s last with the band.

“How Do the Fools Survive?” has a nice bounce to it thanks to various drum portions and Lester Abrams on electric piano. This one has so many amazing musical layers to it that I get something different out of it with each listen.

“Don’t Stop to Watch the Wheels” closes out the record with a bit more of a rocking edge.

What I really like about Minute By Minute and the Doobie Brothers in general is that they have a nice variety of musical styles to share. I think that was a key to their broad appeal; there is a little bit of something for everyone on their records.
Posted by Martin Maenza at 6:24 AM