Electric Light Orchestra - Out of the Blue 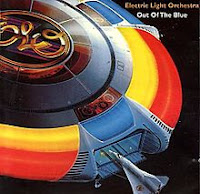 In the fall of 1977, the Electric Light Orchestra released their seventh studio album, the double-disk Out of the Blue. One of the English band's most commercially successful records, there were four million copies on pre-order alone (an incredible number considering the retail channels and the price of albums at the time) which helped the release to quickly achieve multi-Platinum status. The record scored its highest chart position in Canada, reaching number 1 during its total of 29 weeks on the chart. In both the US (58 weeks on the charts) and the UK (113 weeks on the charts), the album peaked at number 4.


Late 1977 and early 1978 maps directly to when I was in seventh grade, the middle year of the three year cycle the made up Middle School (or Junior High School) where I grew up. This time was the threshold of my early teenaged years, when bodies were starting to go through changes. Definitely a magical, mysterious and often frustrating period. It was also the time when a renewed wave of science fiction films was in the theatres. Just the year before I had seen Logan's Run and this very interesting little film called Star Wars. On TV we had things like Space 1999 and the original Battlestar: Galactica to capture our sense of wonder.

So, how does this all tie in to ELO's Out of the Blue? For a geek like me, that amazing album cover with the space ship and glowing primary colors was like a beacon. My adolescent self would have thought, "the art is so cool so surely the music is too". How right that was! I got this album on vinyl and was even more excited that the artistic theme continued to the double-fold interior sleeve (which shows the interior of the ship featured up front). I remember I would stare at the art as I listened to the record, letting both carry me away to some place far away from my bedroom in that western New York small town.

Side one opens with "Turn to Stone", the records first single. The track got as high as number 18 on the UK charts where it stayed for twelve weeks. In the US it went to number 13 (as part of a ten week chart run) while in Canada it went to number 1. I love how this one opens and then moves into a quick tempo pace; the use of the string sections on this one really works for me too. The song reminds me of roller-skating as it was a popular track at the hometown roller rink back in 1978.

"It's Over" was released as the fifth single, but only in the US. Coming out a year after the album had been on the charts, this one only got as high as number 75. It has a gentle quality about it that is part of the song's beauty.

The fourth single "Sweet Talkin' Woman" went to number 6 on the UK charts. In the US, it reached number 17 during its twelve weeks on the Billboard Hot 100. I really like the tempo on this one, how it bounces along. When I hear it, I find myself singing right along as this one of those songs I know quite well.

"Across the Border" opens with the sound of a stream train before moving to an up-tempo song with a rock edge. What I always love about ELO is how they can take classical music elements like Mik Kaminski on the violin here, throw in some unexpected things like mariachi style horns, and then merge it all with a rock foundation to create beautiful music. I like the exotic sound of this track, how it brings to mind a classic film involving espionage.

Side two begins with "Night in the City", the strings played with some urgency. I think they are symbolic of rushing traffic. On the chorus, the vocals have great harmonies which make me think of the Bee Gees.

"Starlight" is a track that brings that whole stellar aspect of the album's cover into focus. It is a sweet, slower tempo song with a little bit of an old-fashioned swing to it too.

"Jungle" is a very up-beat track that features many interesting sound effects to simulate animal noises (birds, elephants and such). The rhythm includes a stomping tribal-like dance to it. I like the song because it is such a wild and different celebration of world unity. A fond memory I have of this song was when a number of my classmates did a performance to it as part of the Middle School variety show in the late 70's.

"Believe Me Now" is next. This short piece sticks more towards the orchestration side of the band's repertoire.

"Steppin' Out" has an ethereal feel to it with its slower tempo. I find it a little too plain except for the chorus and the final movements.

The third side of the album is subtitled "Concerto for a Rainy Day". The next four tracks segue together to make a mini musical suite that focuses on the weather and its ability to affect one's mood. I recall listening to this side of the record when a day outside was dreary and wet, hoping that by the end of the eighteen-and-a-half minutes passing that the weather would miraculously clear up. It did not work that often.

The rain and the thunder set the mood for "Standin' in the Rain"; it really gives me the feel of being caught in a storm when there is nothing you can do about it. Though it has a mid-tempo beat, the song has a feeling of hopelessness to it.

That track perfectly transitions into "Big Wheels" with its slower still, plodding pace. The plunk-plunk of the strings reminds me of falling raindrops.

Though it too opens with thunder, "Summer and Lightning" changes the mood slowly to a more optimistic one. The bridge at the 2:40 mark is a quite unexpected surprise, like a break in a storm that promises something better is to come.

By the time we get through "Mr. Blue Sky", the mood is very much positive and joyous. The tempo is very up beat and includes sounds like a dinging bell and a halleluiah chorus. The vocals near the end include the title being delivered via a vocoder, as well as the final line that says, "please turn me over" - an instruction to the listener to flip the LP for the fourth side. This single went to number 35 on the US Billboard singles chart (only three weeks total on the charts) and number 6 on the UK charts.

The fourth side starts with "Sweet Is the Night". This track is a bit more pop like. I do like the harmonies on the chorus here - very much classic ELO.

"The Whale" is an instrumental track that also appeared on the B-side of the US single "It's Over". Richard Tandy is featured on keyboards on this one. Lynne composed the track after seeing a documentary on the killing of the majestic sea mammals. The song has that cosmic feel with the synthesizers combined with the haunting song of the whales. This one is necessary to listen to with headphones on as the sound dances from ear to ear.

"Birmingham Blues" is an ode to Birmingham, England. The rhythm on this one is infectious; it gets into your head and makes itself right at home. I really like the various musical elements on this one.

"Wild West Hero" was the third single released, going to number 6 on the UK single charts. Melvyn Gale plays the piano on this one that gives it that old time western feel. Of course, ELO never does anything simply and this track has a lot going for it musically too. Very complex arrangements.

I spent many a night with my headphones on listening to this record in my darkened room. Each side has something to bring to the table, giving you plenty of variety to choose from depending upon your mood. ELO's Out of the Blue will always bring back fond memories of my youth.
Posted by Martin Maenza at 8:25 AM

Email ThisBlogThis!Share to TwitterShare to FacebookShare to Pinterest
Labels: 70's, Electric Light Orchestra, ELO, music, Out of the Blue

When I was in college, I remember someone venturing the opinion that the band Chicago had gone downhill since their first album - and this was BEFORE the Peter Cetera years. I'm sure that someone can make a similar case for ELO. As it turns out, the only ELO album that I've ever owned (on cassette) was their second album, featuring ELO's take on "Roll Over Beethoven" mixed in with some very rough-edged classical rock. In their later years, the adjective "rough" usually wouldn't be applied to ELO. Yet I like both their early stuff and their later stuff - heck, I even like the song "Xanadu."