Teena Marie - Irons in the Fire 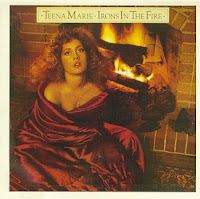 In the hot summer month of July 1980, the last thing anyone wanted to think about was curling up before a roaring hearth. But that’s exactly what Teena Marie wanted you to do based on the cover of her smoking hot third album Irons in the Fire.

Combining elements of funk, soul and R&B, the album burned its way up the charts. It peaked at number 9 on the US R&B charts and number 38 on the Billboard 200 charts. Teena wrote most of the tracks and, for the first time, produced the entire record herself as well. It really shows her talents as a musician as well as a performer.


Side one opens with the seven and a half minute version of “I Need Your Lovin’” With its funky guitars, pounding percussion and blasting horns, this dance track is easily my favorite of the record and probably my third favorite of all of her songs ever. Ray Woodard’s saxophone solos are amazing. I can be in the worst of moods and this song instantly picks me up, every time. As a single, the song went to number 37 on the Billboard singles charts, number 9 on the R&B singles charts, and number 2 for two weeks on the US Dance singles charts.

After that work out, Teena slows it down with “Young Love”. Her sweet voice serenades on this smooth ballad. I find her vocal skills to be incredible as this track demonstrates. She has an amazing range and vibrato. If she were a siren, my boat would have long since crashed upon the rocks - but what a way to go!

It is time to dance again with “First Class Love” and another solid groove.

And we slow things down once more with the title track “Irons in the Fire”. Teena plays the piano on this one with Lloyd Lindroth on the harp as accompaniment. I like to close my eyes and let this one just take me away; the arrangement is beautiful.

Side two opens with another groove that clocks in over seven minutes. “Chains” is about a love that has one completely, totally captivated. I really like the various change-ups in this one that keeps the song interesting and varied.

“You Make Love Like Springtime” is a mid-tempo track that has a bit of an old fashioned swing to it. Jill Jones assists on the backing vocals on this one.

“Tune In Tomorrow”, the only track not written by Teena, was penned by Mickey Hearn. He also provided some of the backing vocals on this and other tracks. This piano ballad has a nice jazzy arrangement to it which allows Teena to vocally do some amazing runs and scatting.

The album closes with “You Make Love Like Springtime (Reprise)” which actually has a different enough spin from the earlier version to make it more than a repeat. The track has a nice instrumental jam to it with a cool acoustic guitar solo.

I really like Irons in the Fire because it is a musical mix that covers a wide range of sounds. The dance tracks are irresistible and the ballads are enticing. It definitely showed the world that Teena Marie was ready to keep delivering masterpieces for a whole new decade.
Posted by Martin Maenza at 5:27 AM