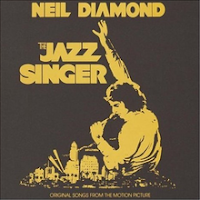 I am not afraid to admit that I have always been a fan of Neil Diamond. I enjoyed his songs in the 60’s and 70’s, hearing them on AM radio and such. I was pleased to see him inducted into the Rock ‘N Roll Hall of Fame last year as he is both an amazing songwriter and performer. But back in 1980 it was surprising to see him add an acting credit to his list of accomplishments.

As 1980 came to an end, the American musical remake of a 1927 classic film hit the theatres; The Jazz Singer starred Diamond along with Sir Laurence Olivier and Lucie Arnaz. While the film did fair at the box office ($27 million gross sales), the soundtrack was a big success - going Platinum multiple times over and reaching number 3 on both the US and UK album charts.


The first side opens with the anthem “America”. The song was the third single from the film; it spent thirteen weeks on the Billboard charts and reached number 8. It also went to number 1 on the US Adult Contemporary charts where it held that spot for three weeks. From its opening strings to its booming rock beat, the song celebrates the history of immigration in the United States. This is one I like to crank up the volume on and sing along to. Sure, it might be corny, but it really puts me in a good mood. It is a great way to open the record.

“Adon Olom” is a short hymn from the Jewish liturgy. The film features a lot of religious connections as the lead character comes from a family tradition of Jewish cantors. However, he wishes to use his gifts of singing to reach a wider audience.

“You Baby” goes right to Diamond’s 1960’s pop roots for the melodies and rhythms. Yet, he also brings it up to more of an 80’s sound too.

The first single from the album was “Love on the Rocks”. This beautiful ballad spent seventeen weeks total on the Billboard charts, including three weeks at number 2 (it was denied number 1 by John Lennon’s “(Just Like) Starting Over”). This is one of those very moving, emotion-filled songs I know by heart, having heard it on Top 40 radio a ton when it was released. It is one I can probably sing along to without missing a beat, though I’m a far cry from even a fairly good singer.

“Amazed and Confused” was released as the B-side of the single for “Hello Again”. I like how this starts with a simple piano opening but then builds in power as the rest of the band joins in.

“On the Robert E. Lee” naturally brings up the imagery of the days of the big riverboats, with its rag-time rhythms. I like it a lot.

“Summer Love” opens with some heavy strings and then segues into a sauntering swing.

The second side greets us with “Hello Again”, the second single. It spent twelve weeks on the Billboard charts and made it all the way to number 6 before falling. This is another sweeping ballad that I like to sing along to. I would love to learn to play it on the piano if I could just get past my mental-blocks when it comes to reading music.

“Acapulco” is next; it was released as the B-side of the single “Love on the Rocks”. It has a nice tropical feel thanks to the instruments and the vocals that waft in like an ocean breeze.

“Hey Louise” is a nice mid-tempo song with a clap-along beat. This light-rock tune gets my toes tapping.

“Songs of Life” was released as the B-side of the single for “America”. This one has all the classic earmarks of a Diamond ballad, a beautiful melody and clean vocals delivered smoothly.

“Jerusalem” is an up-tempo number with a solid piano foundation and a catchy pop beat.

“Kol Nidre/My Name is Yussel” is an adaptation of a traditional Aramaic recitation done at synagogues before event services on Yom Kippur. I may not understand the words but I can appreciate the beauty of it and the music.

The album closes out with a callback to how it started with “America (Reprise)”. In the film, it corresponded to the scene where Jess (Diamond) is performing in concert. It is fitting too as the song quickly became a huge favorite in Diamond’s live shows.

I was in my sophomore year of high school when the film was released. I am sure I went to see the Jazz Singer with my cousin Joan as we often saw movies together. Given that I was a fan of musicals and knew Diamond’s past work, the film was right in my ballpark. I never had the whole album but I did pick up a few of the singles as 45s. Still, I remember all of the songs even though I probably hadn’t heard them or seen the film in a couple decades. I think they still work well. Time to go check the cable guide and see if the movie is playing any time soon.
Posted by Martin Maenza at 8:13 AM