The Jets - The Jets 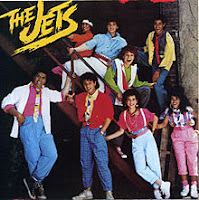 In 1985, the brothers and sisters of the Wolfgramm family (Leroy, Eddie, Eugene, Haini, Rudy, Kathi, Elizabeth and Moana)of Minneapolis, Minnesota, formed an R&B/pop music band called the Jets. The self-titled debut album that year did very well on the charts - reaching number 17 on the US Album chart, number 16 on the US Billboard R&B album charts and number 57 in the UK. The record was certified as Platinum and yielded four singles.


The first side kicks off with “Curiosity”, the debut single for the group. The song went to number 8 on the US R&B charts and number 41 on the UK singles charts. The song has a nice funky bass line with melodic vocals by the sisters.

The album‘s second single “Crush On You” spent thirteen weeks on the Billboard charts, peaking at number 3. In the UK, the song reached number 5 on the singles charts. This track is my favorite one of the nine, though I think they are all very good. This song really gets me moving with its steady rhythm. It was a favorite of mine in the clubs in 1986; it really got everyone out on the floor. My feet are dancing beneath my desk as I compose this post. The high energy of the song made it a perfect candidate for my cardio workout play list too.

“You Got It All”, the fourth single, spent twelve weeks on the Billboard charts, also reaching number 3. It went to number 2 on the R&B charts and also spent two weeks at number 1 on the US Adult Contemporary charts. This ballad was penned by Rupert Holmes, famed songwriter and singer, and was a slow dance favorite in 1986. I think the vocal arrangement is wonderful.

“Love Umbrella” closes out the first side by bringing back the up-tempo groove. The song, about how a guy’s special gal has a way of driving the stormy days away, has a catchy chorus.

Side two opens with “Private Number”, the third single from the album. It went to number 47 on the Billboard singles chart and number 28 on the R&B charts. This one, like many of the others, has that signature Minneapolis sound that was popular in the mid-80’s. I’m a big fan of that sound as displayed by this group and others like Ready For the World.

“Heart on the Line” may not have been released as a single but it did get a bit of club airplay as well. Like most of the other songs on the record, this one was written by the team of Jerry Knight and Aaron Zigman. This duo clearly had their fingers on the dance pulse of America at the time. I think it is a solid groove.

The dance party continues with “Right Before My Eyes” with a great synth line and syncopated beat. The song tells of how a guy discovers the girl next door is all grown up and is now someone for whom he is having feelings.

“La La Means I Love You” was first recorded in 1968 by the Delfonics, who took the song to number 4 on the US charts. The Jets' cover brings the song into the 80’s quite nicely with a great R&B beat and a shared lead vocal from a number of the siblings, both female and male.

The album closes with “Mesmerized”, another solid dance track with a catchy rhythm and beat. The lyrics speak of a guy who is totally captivated by a young woman, completely hypnotized by love.

I was right in the middle of my college years when the Jets came out. I was a big fan of the songs from hearing them out at the dance clubs and thus got this one on cassette. I became an instant fan. In a lot of ways it reminded me of family groups like the Jackson 5 or the Osmonds from the 70’s. Of course, these songs all have amazing performances to the Wolfgramms, each of the eight siblings in the Jets play instruments as well as sing.

Sadly, MCA has yet to release the full albums in digital format. The greatest hits are available but some of the deeper tracks are a little tough to track down. Hopefully someday I’ll be able to fill in the rest of the Jets on my iTunes library.
Posted by Martin Maenza at 5:15 AM