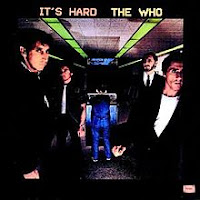 On September 4th of 1982, the Who released their tenth studio album and the last one with bassist John Entwistle and drummer Kenney Jones. Entwistle even penned three of the record’s tracks. This would be the band’s last album of new material until 2006. Eventually certified Gold, It’s Hard went to number 11 on the UK album charts, number 8 in the US and number 3 in Canada.


The single “Athena” opens side one. The track went to number 40 on the UK singles chart, number 28 on the US Billboard singles chart and number 3 on the US Rock charts. The song relates to how Pete Townshend fell in love with actress Theresa Russell and his disappointment of being rejected by her. For me, this song is very much like classic Who - it opens with thundering guitars and drums.

“It’s Your Turn” is next. After an amazing opening track, this one comes off as a little weaker.

I like how the rhythm changes up a few times in “Cooks County”. The transitions work well and make the track interesting to listen to.

“It’s Hard”, the third and final single, is next. Despite a strong synth line and a solid guitar line, it failed to chart in the Billboard single charts and only reached number 39 on the US Rock charts.

“Dangerous” has a nice rhythm to it and has a very early 80’s sound. I think it could have used an infusion of a bit more energy though, turning a good track into a really great one.

“Eminence Front”, as a single, went to number 68 on the US Billboard charts and number 5 on the US Rock charts. The lyrics paint the portrait of drug use by the rich, and how they are used to create a false sense of joy to hide their own personal problems. This is easily my favorite track from the album. The opening is memorable, and it transitions so well into the band’s live shows with lasers and such.

Side two begins with “I’ve Known No War”, a reflection upon the Cold War between the USSR and the United States. The opening sets a great tone for the rest of the song. You can feel the tension that mirrors the concern people had about the possibility of nuclear war being only a push of a button away.

“One Life’s Enough” is a beautifully simple piano ballad.

“One at a Time”, after a trumpeting opening, brings back the rock with a quick-tempo beat. The lyrics tell about a couple where both are having affairs.

“Why Did I Fall for That” is next. This one suffers from typical end-of-the-second-side syndrome in that it feels like a bit of filler. It is not a bad song but it is not very memorable for me.

“A Man Is a Man” too is not a bad song. It has that typical Who sound, but like many of the songs on this record the lyrics are very introspective. The band had been through a lot in the seventeen years they have been together.

“Cry If You Want” has a march drumbeat with aggressive guitar lines that build on the verses. This song certainly captures the “angry young men” vibe that is associated with the Who of the 60’s, but it too is tempered a bit with aged wisdom.

It’s Hard was an album I heard a good bit during my senior year of high school. A number of guys I knew in school liked the album and my older brother was a huge fan of the band. For me, I knew the big hits from my periodic listening of the Buffalo album-oriented rock radio station. Except for a few really stand out tracks, I feel that it made sense for the Who to take a break after this album.
Posted by Martin Maenza at 5:23 AM

"Eminence Front" is a fantastic cut! I will have to check out the rest of this album.