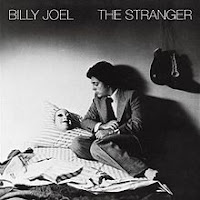 In 1977, the piano man from the Bronx released his fifth studio album. It was the multi-platinum selling The Stranger which helped Billy Joel breakthrough and started his career as huge star. The album went to number 2 on the Billboard charts (where it spent six of its total 137 weeks!), number 24 in the UK, number 3 in Japan and number 2 in both Australia and New Zealand. Rolling Stone magazine ranked it at number 67 on its 500 Greatest Albums of All-Time list.


Side one opens with the second single from the album “Movin’ Out (Anthony’s Song)”. The record spent eight weeks on the US singles chart and reached number 17; in the UK it peaked at number 35. The lyrics paint a picture of a New Yorker disgusted with the aspirations of the working class man to acquire status symbols like a Cadillac or a house in Hackensack, NJ. This is one of those songs I’ve heard so many times that I know the words by heart (and often will sing along to it). I can certainly relate to it in ways - there were many times I was looking forward to “movin’ out”, growing up and getting out on my own. It took me a decade after this record’s release but I finally did get out completely on my own (after finishing high school and college).

“The Stranger” was released as a single but only in Japan, where it peaked at number 2 on the charts. The piano opening, accompanied by whistling, sets up a nice mood for the song. It then explodes into the rocking main part. The lyrics are all about that other side of ourselves that we keep hidden from the world.

“Just the Way You Are” was the album’s first and most successful single. It spent eighteen weeks on the Billboard charts and reached number 3. It was also the number 1 song on the Adult Contemporary charts for four weeks and the 1978 Grammy winner for Record of the Year. This one is a beautiful tune, another I know by heart from hearing many times over in the last thirty four years. I like the slow, jazzy feel to it.

“Scenes from an Italian Restaurant” is actually a mini-suite of three songs together - a gentle piano ballad, an up-tempo jazzy piece and then a more traditional rock and roll end-cap. The seven and a half minute track is a nice observational piece of life and people as viewed from a popular eatery.

The second side begins with “Vienna”, song inspired by a visit to the Austrian city. This gentle ballad is probably my least favorite track on the record. It is a good song but not one that I connect to as much.

“Only the Good Die Young”, the third single, spent five weeks on the Billboard chart and peaked at number 24. The song is a straight-forward attempt by a young man to try to seduce a Catholic teen to have sex with him. The object of his lusst is named Virginia and implies the young woman's virginity. Many religious groups pressured radio stations to ban the record which only fueled the song’s popularity among youth and helped drive album sales. Having grown up as a Catholic (attending Mass every weekend, an officer in our church’s youth group, etc.) but having attended public school, I can relate to the song but am not offended by it in the least bit. I knew a few Catholic school girls that the song could apply to, and I knew some that were Hell on wheels. I do think the song is very catchy and I’ll often sing along to it.

The fourth single was “She’s Always a Woman” which spent nine weeks on the charts and topped out at number 17. The song tells the tale of a man who loves everything about his woman, even her unusual traits and imperfections. I think this is a beautiful song and one I’d like to be able to play on the piano, if I could ever get past that whole hurdle of having to learn how to read music. Sometimes you can’t teach an old dog like me new tricks.

“Get It Right the First Time” has a nice tempo to it. I really like how this one swings.

“Everybody Has a Dream/The Stranger (Reprise)” has a bit of a gospel feel to it, in the tradition of Ray Charles.

Growing up in the 70’s, I was very aware of this album when it came out. I knew the hit songs from listening to Top 40 radio. My older brother, who was in high school at the time, had a copy of the album on vinyl too.

As I was listening to The Stranger again for this review, I realize how much this album takes me back to those days of the 70’s. I was still in junior high back when this record debuted, just twelve years old and certainly not very worldly in the matters of relationships and love. Yet, these songs are so universal that they were relatable even to someone of my (at the time) limited world view. As I got older, I could find further appreciation of them. And I think that’s why this album sold so well and has earned a place in music history - it has songs about everyday life that people can find a connection to. In that respect, The Stranger is hardly a stranger at all.
Posted by Martin Maenza at 6:16 AM

I can remember the songs he released from the album. He sings with a kind of energy that makes you want to listen.