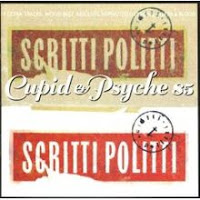 Cupid and Psyche refer to the Greek myth where the son of Venus (Cupid) is sent to make a beautiful girl (Psyche) fall in love with a hideous monster. The young god-ling cannot complete the task as he has fallen in love with the mortal himself.

In 1985, the British synth-pop group Scritti Politti put out there second album in reference to that tale - Cupid & Psyche 85. The original vinyl release had nine tracks, five of which were singles released in the UK. The later cassette and CD versions added four more tracks, three of which were alternate versions of earlier tracks on the record.

The album went to number50 on the US Billboard Album chart, number 28 in the Netherlands, number 13 in New Zealand and number 8 in the UK.

“The Word Girl” is the first track on side one. It carries over the reggae influence from the band’s first album. The song is straight-forward and very pleasant. It hit number 6 in the UK and number 18 in both the Netherlands and New Zealand.

“Small Talk” is a nice mid-tempo track with a steady beat, good for dancing or a light workout. I like its bouncy rhythm.

“Absolute” was the second single from the album, reaching number 17 on the UK charts, number 26 in New Zealand, and number 10 in the Netherlands. It continues the same form from the previous track. The cascading synth line is a nice hook.

Things slow down a bit with “A Little Knowledge”. The song is very gentle and soothing, like a child’s lullaby.

“Don’t Work That Hard” brings back that mid-tempo beat once more. Lead singer Garside’s voice, very light and airy, blends in to the synthesizers to form a nice harmony.

Side two opens with the hit single “Perfect Way”. While this fifth single was not a success in the UK (number 48) it performed surprisingly well in the US (spending twenty five weeks on the Billboard Hot 100 and reaching number the number 11 spot, and hitting number 6 on the US Billboard Dance chart). The guitars and drums create an infectious combination that gets my toes tapping. I like the piano solo on it also. The song did very well in the clubs upon release; I recall it brought a lot of people to the dance floor (myself included) every time those opening measures began bounding out of the speakers.

“Lover to Fall” is next. This simple love song moves along nicely and is an example of a lot of the pop-dance songs of this period. It would fit right alongside first album Madonna tracks in a club set without any problem at all.

“Wood Beez (Pray Like Aretha Franklin)” was the first single from the album, and it did very well on the UK charts (scoring the group its first top 10 entry). In the US, it barely penetrated the Hot 100 (topping out at 91) but it shot to number 4 on the US Billboard Dance chart. The song has a nice funky guitar line and steady beat, perfect for dancing too. This was another one I recall dancing to as well, riding the popularity of “Perfect Way” here in the States.

“Hypnotize” closes out the side and album. It was the third single released; it only reached 68 on the UK charts and number 43 on the US Billboard Dance charts.

Back in the day I picked up Cupid & Psyche 85 on cassette, drawn in mostly because of the hit “Perfect Way”. I found that I enjoyed all of the tracks though. They had a light-pop approach to them with just the right beat. Perhaps a little safe and vanilla at times, but sometimes you need a bit of that just for a change of pace.
Posted by Martin Maenza at 5:19 AM