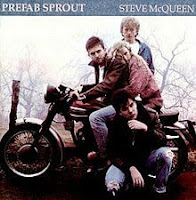 The English pop band Prefab Sprout released their second album in 1985 entitled Steve McQueen (in the US it was released as Two Good Wheels due to legal issues with the estate of the late actor Steve McQueen). In the UK, it reached number 21 on the album charts; in the US is only got to number 178 in the Billboard Album chart. The album was produced by Thomas Dolby.

I’ve never heard this album before. I’m only familiar with one of the tracks (“When Love Breaks Down”). But, since it shows up on the 1001 Albums list I thought I’d take a chance and give it a whirl. Plus, if Dolby was involved I am sure I'll enjoy it (since I'm such a huge fan of his work). So, this will be another first-time-listening review (all based on initial impressions).


“Faron Young” opens side one. It has a rockabilly feel to it with the twanging guitars - very upbeat. I like it a lot.

“Bonny” has a gentle swing to it as it opens. The very subdued approach really forces you to listen. It is a song about separation and love lost. Another pleasant track.

“Appetite” continues along the same vein musically. It is straight up pop music, which I tend to like a lot.

The single “When Love Breaks Down” did much better on the UK charts when it was re-released in 1985 (reaching number 25). This is a song I have on my iPod already (it was on a compilation CD I had). It is a good song - a nice candidate for a mix tape when you’re looking for something a little less known.

“Goodbye Lucille #1” is next. Not sure where the song title comes from, given their singing about Johnny most of the song. Interesting way to go.

“Hallelujah” closes the first side. It has a smooth jazzy swing to it.

Side two opens with “Moving the River”. This reminds me a little of Joe Jackson or Donald Fagen, which is a good thing. The song definitely picks up as it goes.

“Horsin’ Around” is next. “Desire As” follows. I’m starting to see the songs blurring. I hoped that “Blueberry Pies” would break the spell. No such luck.

The album ends with “When the Angels”, and finally we get a little variety. The organ opening is nice, and the tempo picks up after three very slow moving songs. I guess it was time for a wake up call, thankfully.

Overall, the album was just okay for me. The arrangements on a number of the songs contain similar elements and keep the same pacing. The vocals are pleasant enough, if not a little too soothing. This would make for good background music for brunch - not too distracting.

I don’t really don’t see myself actively seeking out much from this album, unfortunately. There were a couple tracks I liked well enough, but not enough to go urgently download.
Posted by Martin Maenza at 5:11 AM

This album was introduced to me by a British friend one summer while I was going through a difficult relationship, far apart and far from home. I heard it often.
Now, I can't really listen to this album save for a couple random times every other year or so.

When music is so meaningful to us (even for those difficult times) we never forget it. It is part of our make-up. Thanks for reading and sharing.