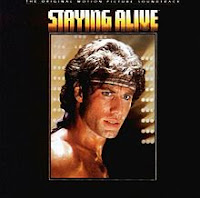 On July 15th of 1983, Paramount Pictures released Staying Alive, a sequel to the highly successful Saturday Night Fever from 1977. The film continued the story of Tony Manero (again played by John Travolta) who has moved to Manhattan to pursue a dream of dancing on Broadway. Yeah, I didn’t quite get that from the character from the first film either but…whatever. The film also stars the beautiful Cynthia Rhodes and the enchanting Finola Hughes, and it was directed by Sylvester Stallone.


The film did fairly well at the box office (pulling in almost $65 million in the US alone) and was in the top ten most successful films of 1983. However, critics ripped the film to shreds. Compared to the original, this one fails in comparison. Some would consider it an effort to cash-in on an iconic classic. I’m sort of on the fence there (I can see both sides but am not inclined to take either firmly).

The soundtrack album did fairly well on the charts. It reached number 14 in the UK, number 6 on the US Billboard Hot 200, number 2 in Italy and Japan, and number 1 in Switzerland. Overall, the record sold 4.5 million copies worldwide. I was one of those 4.5 million, having bought the record on vinyl during the summer between the end of high school and my first year of college.

The record is broken down kind of logically. Side one features songs written and performed by the Bee Gees.

“The Woman In You” opens the record. The single did marginally well in most markets. In the US, it spent six weeks on the charts and peaked at number 24 on the Billboard Hot 100. It also charted at number 81 in the UK, number 73 in Australia, number 23 in France and Germany, number 21 in the Netherlands, number 17 in Belgium and number 2 in Spain. I like how this one opens with a driving guitar rhythm that continues as a foundation for the verses of the song. The whole sound is a nice carry over from what the guys had been doing so far in the early part of the decade. It is my favorite Bee Gees track on the record.

“I Love You Too Much” is a mid-tempo track that leans more towards the ballad side of things. It is a pleasant enough song.

Next is “Breakout”, a mid-tempo dance track. It is put together decently, but it lacks that certain something that could have kicked it up into a better song.

“Someone Belonging To Someone” was the second single the brothers had from the album. It failed to break the top 40 in both the US and UK (stalling at 49 on both charts). It also charted at number 55 in Germany, number 24 in China and number 23 in Belgium. The Bee Gees have described it as a “fair ballad from a silly film”. I do enjoy this song a lot; it has all the elements of classic Bee Gees ballads that I like - great harmonies and a sweeping melody. It is definitely my other favorite Bee Gees song from the film.

“Life Goes On” is another mid-tempo dance track. It is a good effort that seems to be just there. Again, it is nothing terrible but nothing overly exciting either. It was like the Bee Gees were just phoning in their efforts here.

The side ends with a short reprise of “Stayin’ Alive”, a carry over from the first film. I guess it was in the film and on the record to tie things in with Saturday Night Fever. It seems a bit like filler to me.

Side two features a trio of artists with two tracks apiece.

Frank Stallone starts off things with “Far From Over”. And, yes, Frank is Sylvester’s brother. I guess it pays to know the director, eh? He too is an actor as well as a singer/guitarist (he co-wrote his tracks and Cynthia’s tracks on the album). “Far From Over” was the highest charting single from the album; it spent ten weeks on the US Billboard Hot 100 charts and peaked at number 10. The song has an up-tempo rhythm to it with driving guitars and an aggressive piano accompaniment. It is easily my favorite from the record, a great song for a workout mix as it builds very well.

Tommy Faragher is next with “Look Out For Number One”. Tommy is a singer/keyboardist/song-writer as well as producer. He has worked with many artists over the years, and most recently has done some work on the songs featured in season two of Glee. This song has a nice bit of an edge to it, starting out simple but building steadily.

Cynthia Rhodes shows she is a triple threat (not just a dancer and actress but also a singer) with “Finding Out the Hard Way”. I found her singing voice to be very welcoming; she would have been right at home with any of the female vocalists on the adult contemporary charts at the time. The song is a nice mid-tempo number that works well here.

Frank is back with “Moody Girl”, a light jazzy ballad. This is another of those songs I liked to listen to in the dark with my headphones on, letting the song take me away with it. It has always struck some chord deep within me.

Tommy sparks things up with “(We Dance) So Close To the Fire”. Again, he gives a high energy number with a driving beat that’s great for dancing to.

Cynthia closes the album on a duet with Frank on “I’m Never Gonna Give You Up”; their two voices blend well on this ballad. I recall listening to this song a lot when I was having relationship problems, imagining I was singing the duet with that certain woman. Corny, sure, but it really helped a lot.

I saw Staying Alive in the theatres on its original run during the summer of 1983 (I also own a copy of the film now on DVD). I thought it was okay and liked the music well enough to purchase the soundtrack shortly thereafter. What I found was, even though I was already a huge Bee Gees fan, that I spent more time listening to side two of the record. Sure, they’re generic pop ballads and dance songs that aren’t heard much any more - but that’s kind of why I like them. They’re not over-exposed. Those songs really make the film for me and are why I like this soundtrack. Your mileage may vary.
Posted by Martin Maenza at 8:29 AM