The Jesus and Mary Chain - Psychocandy 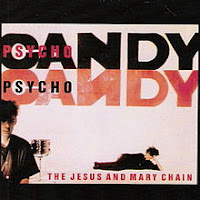 In November of 1985, a Scottish alternative band called the Jesus and Mary Chain made their recording debut with the album Psychocandy. This debut was a critical favorite, showing up on Q magazine’s 100 Greatest British Albums Ever (at number 88) and 40 Best Albums of the ‘80’s (at number 23), and on Rolling Stone’s 500 Greatest Albums of All-Time (at number 268). Not too shabby for a first time out of the gate.


I must admit that I don’t have that much familiarity with the record or the band in general (beyond knowing the name). However, with such high praise, I thought it was one I should give a listen to. So, here’s another first-time-listening review.

Side one begins with “Just Like Honey”. Okay, I know this song. I have it in my iTunes library as it was on a compilation set of mine. The song is okay though a little repetitive in the lyrics/chorus. It started out with a Motown-like beat but slipped into the heavy guitars. It was the third single from the album - it reached 45 on the UK charts.

“The Living End” explodes out of the gate on a wall of guitar sound, with an emphasis on the distortion. In my youth had I heard this (at 20 years old when it came out) I might have been more inclined to like it. At 46, I want to say it’s too much noise for me.

“Taste the Floor” adds a bit more bass than the last track, but the distortion level is still too up there for my taste. This might be more palatable if the last thing I had to drink wasn't just Simply Orange, straight up.

“The Hardest Walk” is next. This one changes it up a bit. A lot less distortion and the vocals are more prominent. I can actually focus on the lyrics.

“Cut Dead” is also a bit more pleasant sounding. It has a nice pop sensibility to it that I can appreciate even if the lyrics are a bit serous.

“In a Hole” brings back the distortion. Ugh. Not good. Okay, if there is a kind of music I don’t like much it would be music with way too much feedback on the guitars. It gives me a headache.

“Taste of Cindy” closes the side. It sounds like more of the same to me. I think I’d like it more if the music wasn’t so loud. I am getting old.

Side two’s first track is “Never Understand”. Again, the lyrics and singing are fine. But I can’t enjoy them fully with the sound of feedback ringing in my ears. This was the first single from the album (it went to 47 on the UK charts).

“Inside Me” is more of the same. Next, please.

“Sowing Seeds” is like an oasis in the middle of the hell storm. I actually like this track. The guitars are strong but not overpowering. The lyrics are clearly understandable.

“My Little Underground” has a nice rhythm to it. Very alternative but not overpowering. I believe we may have turned a corner. Two tracks I like in a row. That’s progress.

“You Trip Me Up” was the second single from the album (it reached 55 on the UK charts). It is very low key but the guitar distortion returns.

“Something’s Wrong” has a nice opening but that’s about it. Even my fifteen year old son thought it was unbearable (and there is some stuff he listens to that he likes that I think is equally a lot of “noise”).

“It’s So Hard” closes the album. Thank the stars!

Okay, I have to just conclude that this album and this group are not to my cup of tea. The 1001 Albums list said I had to hear this one before I died. After more than half of the tracks, I feel like my brain might be dead now. Now, as I said, there were a couple songs that I liked but that’s about it. Oh well, I guess that’s the beautiful thing about music - it doesn’t have to appeal to everyone equally and there is something for all tastes.

Tomorrow is another album.
Posted by Martin Maenza at 5:16 AM