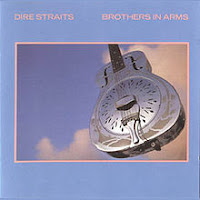 In 1985, the British rock band Dire Straits released their fifth studio album Brothers in Arms. The record was a commercial success for the band, spending ten weeks at number 1 on the UK Album Chart and nine weeks at number 1 on the US Billboard Album chart (with ninety-seven weeks total on the charts). It also went to number 1 in eight other countries and has sold over 30 million copies worldwide since its debut.


The first side of the album starts off with "So Far Away". It was actually the third single released in most of the world in 1985 but was not released in the US until 1986 where it peaked at number 19. Mark Knopfler and John Illsley are excellent guitarists and this song has some of their finest work. It is simply amazing.

"Money for Nothing" is up next. It was the first single from the album and reached number 1 on the US charts (and number 4 in the band's native UK). The video for this song was one of the most played music videos on MTV during the time the network actually showed videos. The vocal hook "I want my MTV" as delivered by Sting certainly didn't hurt in that department. The song won the Grammy for Best Rock Performance by a Duo or Group in 1985. Four years later, Weird Al Yankovic did a parody of it called “Money for Nothing/Beverly Hillbillies” with Knopfler and Guy Fletcher playing instruments on it.

The guitar riff is one of the classics from the 80’s. It plays through out the eight and half minute song, making an indelible mark on your subconscious. The lyrics make a statement about the music industry with commentary on the newly growing video aspect of the business.

"Walk of Life", the fifth single, did very well on the charts (it was a number 2 hit single in the UK and a number 7 hit in the United States). Ironically, the song was nearly left off the album; it was probably a good thing the band out voted their producer on this decision.

The rhythm on this one is simple chord change with a great rock ‘n’ roll take. It is supported by a synthesizer organ accompaniment. The lyrics tell the story of a singer who performs in the subway tunnels for spare change, anything to make a living.

"Your Latest Trick" was the seventh and last track released as a single. The opening saxophone by Michael Brecker sounds sweet and soulful. I like the jazzy sounds of this one.

"Why Worry", an eight and a half minute song, closes out the side. The guitar work on this one sweeps me away with ease. I like the brief piano chords before each verse. They have an amazing effect on me for some reason (hard to put into words). It gets a longer use in the center bridge of the song which is nice.

The second side of the album begins with a "Ride Across the River" (the sixth single) which has an off-beat, jazzy rhythm to it. The song is about guerrilla warfare, and the flute and other sounds create an uneasy feeling to the whole track. I do find this one very interesting to listen to.

The lyrics of "The Man's Too Strong" speak of a former soldier and his inability to show any feelings for fear they are a weakness. The guitar work has a bit of a country flavor to it; that really fits this song.

"One World" was the second single from the album. The guitar on this one has a blues feel to it. I really like how the band is changing things up a bit, giving things a nice variety through out.

The title track "Brothers in Arms", the fourth single, closes the album. As with other tracks from this side, it focuses on futility of war. You can hear the sadness in the wailing guitar through out. Very fitting.

I have to make a comment on the album cover for Brothers in Arms. The blue sky with the silver guitar floating in the air as clouds pass behind it is an amazing visual. The guitar is a National Style 0 Resonator which was only produced from 1930 to 1941. I bet this one looked amazing on vinyl.

I owned Brothers in Arms on cassette, bought while I was working my co-op job in New Jersey in the summer of 1985. I was rather partial to the first side, so that’s usually what I listened to when I popped this one in my boom box. But listening to the whole thing again after such a long time, I realize that the entire album was very good - with the deep tracks complimenting the big hits very well.
Posted by Martin Maenza at 5:25 PM

I have it on vinyl!