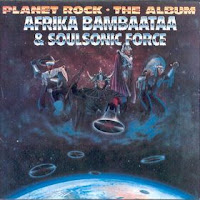 Afrika Bambaataa is the on-air name of American DJ Kevin Donovan from South Bronx, New York. His style of break-beat deejaying was critical to the early development of the hip-hop music style of the 80’s. In 1986, Tommy Boy Records released Planet Rock: the Album, a collection of previously released old-school hip-hop singles.


Side one features a trio of original twelve-inch releases.

“Planet Rock” first hit the airwaves in 1982. It took the electronic style of music pioneered by Kraftwerk (and samples two of their songs to build the foundation of the track) and evolved it. The song is considered by Rolling Stone magazine as one of the 500 Greatest Songs of All Time (ranked number 237). It reached number 4 on the Billboard Soul charts, number 3 on the dance charts, and number 48 on the Billboard Hot 100. I remember this one well, having first heard it on the local college radio station while I was still in my senior year of high school. It is a fantastic dance jam, full of lots of energy that just does not let up for seven and a half minutes.

“Looking for the Perfect Beat” came out in 1983. It features some amazing cutting and scratching as well as a cascading background line beneath the beat. When you listen to it with headphones on, the sounds bounce from ear to ear, creating an amazing musical effect. Of course, the best way to experience this one would be in a packed club with booming speakers all around and strobe lights showering down on the floor. It’s the perfect storm of dance club music.

“Renegades of Funk” was the third single by the group, also released in 1983. The original twelve inch single cover was done up like a super-hero comic book cover. The lyrics celebrate the prominent figures in black history, from key figures in the fight for civil rights to present day street artists. The song features heavy percussion and a large amount of hand-claps as well as a very funk bass line.

Side two opens with “Frantic Situation”. Grandmaster Melle Mel, one of the lead rappers from the Furious Five, is featured on this track. Once again, there are interesting music samples on this one, showing how combining various elements can create something totally different.

“Who You Funkin’ With” falls into the category of challenge-rap; this is when rap crews would compete to show who could drop the freshest rhymes. If I am not mistaken, I believe I can pick up a little bit of “Buffalo Gals” in the samples. Melle Mel also helps out this track as well.

“They Made a Mistake” closes out the record. It features some interesting echoing effects.

I’ve mentioned before that I’m a fan of dance music, and the tracks from this record certainly typify the type of club music that was prominent in the early half of the 80’s. They were not designed to be thought-provoking or scholarly. This was music to let yourself go and unwind after a long week of school or work. It is about fun, freedom and movement.
Posted by Martin Maenza at 5:19 AM