Tears For Fears - Songs From the Big Chair 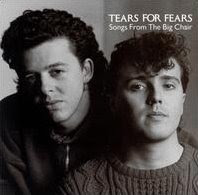 In 1985, the synth-pop due Tears For Fears released their second and highest album to date - Songs From the Big Chair. The album peaked at number 2 in their native UK and number 1 on the US album charts. The title of the album comes from the 1976 television film Sybil, about a woman who suffers from a multiple personality disorder and only feels at ease while sitting in her analyst’s "big chair".


The hit single "Shout" starts off side one. It spent thirteen weeks in the US top 40, three of which were at the number 1 spot. The song has an anthem quality to it, with a chorus repeated over and over. The song includes power chords, thick percussion and even a guitar solo. Lyrically, the song focuses on political protests but in a responsible way (thinking really about what the cause is and what it means to you). I love the opening on this one - a very distinctive way to open the record.

Side note: back in college I made up my own kind of parody to this song called “Trout”. I actually came up with the first verse and chorus. My teenaged son thinks it’s funny; every time “Shout” comes on the radio he’ll start going into “Trout”.

Some beautiful orchestration opens "The Working Hour", including piano and saxophone. Roland Orzabal then comes in with some powerful vocals. I really get caught up in this song; the music swirls around me like a steady moving stream and takes me on a wonderful journey.

"Everybody Wants to Rule the World" was the band’s first top 40 song in the US, spending fourteen weeks on the charts. It was also their first number 1 single (spending two weeks at the top spot). The light and airy tempo of the song contrasts the theme of the lyrics which deal with greed, power-mongering and warfare. Curt Smith delivers the vocals on this track.

"Mother's Talk" was the final single from the album to hit the US top 40, but it only got as high as number 27. I would venture to guess by this point in 1986 most fans already had the album and skipped the single release. The song was inspired by When The Wind Blows, the 1982 anti-nuclear graphic novel by English cartoonist Raymond Briggs. The opening drum rhythms have a calypso feel to them. The guitar chords have an ominous sound to them, mirroring the impending peril of nuclear war.

The second side begins with "I Believe" with Orzabal on the grand piano. The song has a jazzy feel to it with the gentle guitar and drums. It is my favorite of the non-single tracks.

"Broken" is a wonderful track. It has an anxious edge to it, driving forward as it builds. The lyrics come in during the last minute, and they are minimal (but they do mirror those in the next track). The star of this piece is the music.

"Head Over Heels" was the third single from the album to break the US charts, and it reached as high as number 3. Because it shares the same piano/synth motif as the previous track, the two songs were often played together on album-oriented stations. The lyrics speak of love that goes a little bit perverse in the end. Everybody probably remembers the video with Orzabal trying to get the attention of a librarian, played by Rebecca De Mornay.

"Listen" has a haunting musical quality to it. It is a nice way to bring the album to a close.

This record takes me back to those years when I was discovering my own self-reliance and independence. I was on my first co-op cycle and doing actual work in my chosen field of studies - computer science. I purchased Songs From the Big Chair on cassette during the time between my sophomore and junior years of college. While it was the single "Shout" that drew me in, I came to appreciate the entire collection of songs. Back then, I was more taken in by the music and didn’t give major thought about the lyrics. Taken together, though, the songs are really amazing. I think this is a solid record from start to finish and it holds up very well after all these decades.
Posted by Martin Maenza at 5:23 PM

An absolutely amazing album. This record is most certainly lodged somewhere in my life long top 20 albums of all time. The perfect track placement and emotional coaster ride of chord progressions and percussion are complimented by incredible lyrical content.

Hi Martin,
This is one of my favourite albums of the 80's and I STILL have it in my car.

Although the intervening years have dulled my appreciation of some tracks (Mother's Talk and Shout), Head Over Heels has always had the capacity to put me in a good mood.

"Listen" is, perhaps, the most under-rated track on the album, in my opinion.

Great review, mate, and I shall be going through more and more of them!!

Andy, thanks so much for reading. I appreciate your thoughts as always.