the Replacements - Let It Be 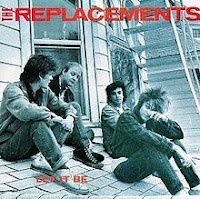 In 1984, the Minneapolis punk rock band the Replacements decided to change up their sound a little bit for their third studio album Let It Be. The lyrics became a little more genuine and the musical arrangements a bit more detailed. The end result record might not have been a big seller but it was a critical success. It appeared on Rolling Stone’s Top 100 Albums of the 1980’s (at number 15) and 500 Greatest Albums of All-Time (at number 239). VH1 ranked it number 79 on their list of 100 Greatest Albums of Rock and Roll. Spin magazine put it at number 12 on their list of 25 Greatest Albums of All Time. It also appears on the 1001 Albums You Must Hear Before You Die list.


I’ll be completely honest - I have never heard this album until today. I know the band and their 1987 song “Alex Chilton”. But beyond that, I really don’t have a lot of their music in my collection. So I decided to give this album a first-time-listen-then-review. After all, these various critics can’t be wrong, can they?

“I Will Dare” starts off side one. I like how this one opens - very up-tempo. Once I get to the chorus, it sounds a little familiar. I actually may have heard this one somewhere in the past twenty six years. I like Paul Westerberg’s mandolin playing on this one. It also features a guitar solo by REM’s Peter Buck. Good song.

“Favorite Things” has a nice rapid-fire guitar to it. The band’s punk roots show a bit on this one. Again, very likable.

If the last song had some punk roots, “We’re Comin’ Out” is the whole tree! This one has a lot of sound and fury - maybe a little too much for my usual taste. Funny thing though, at the halfway point it sort of goes in an entirely different direction - sort of a swinging beat - that eventually goes back to full punk again.

“Tommy Gets His Tonsils Out” is an odd subject for a song, but this is a very punk track so “why not?”

“Androgynous” features Westerberg on the piano. I like the style of this one - sort of quiet and approachable. The song was later covered by the Crash Test Dummies and Joan Jett. I’m going to check out Joan’s version.

The side ends with a cover of KISS’ “Black Diamond”. I enjoyed what the Replacements did with this one. They stay true to the original but inject their own elements into it as well. Nice job.

Side two opens with “Unsatisfied”, a solid effort. It is more rock and less punk. It reminds me a little bit of the Alarm.

“Seen Your Video” is a three minute or so track that is instrumental for the first two plus minutes. The last minute or so adds mostly Westerberg wailing “we don’t want to know”. Different.

“Gary’s Got a Boner” is an even odder subject for a song. This one is very much a punk song with in-your-face-lyrics and loud guitars complete with some distortion. It’s a good song if you like that kind of music. Me, not so much.

“Sixteen Blue” is back to the easier rock sound that I prefer. The album ends with “Answering Machine”, which has some heavier rock elements to it but still not overbearing or too punk. It does tend to drone on though so it sort of loses me, especially with the odd “voice over” stuff near the end.

For me, this album is sort of like the Batman villain Two-Face - a single entity that struggles with two diametrically opposite personalities. Part of this album wants to go into the more straight-forward rock category, while the other part would rather stay in the heavy punk zone. For me, that means I like about half of it and can live without the other half. Out of the eleven songs on the original release, I’ve tagged six that I’d be interested in hearing again. I’ve added those to my emusic.com saved for later list to download in the future.
Posted by Martin Maenza at 5:16 AM