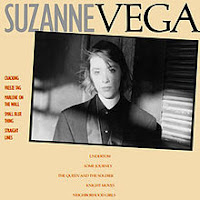 In the early 80’s, Suzanne Vega was a working American folk-inspired singer/songwriter, performing in small venues in Greenwich Village, NYC. She got her big break when she was signed to A&M records. Her self-titled Suzanne Vega from 1985 was her first studio release.

The record was well-received by critics in the United States. Rolling Stone magazine ranked it number 80 in its Top 100 Albums of the 1980’s, and the album appears on the 1001 Albums You Must Hear Before You Die list. At the time, the record barely broke the top 100 (stalling at number 91). It did much better in the UK and New Zealand, reaching number 11 and number 9 respectively.


Once again, I’m going for a first-time-listener review on this record, offering an initial impression.

Side one starts with “Cracking”, a soft acoustic number. Vega’s vocals are equally soothing, almost ethereal.

“Freeze Tag” brings up the imagery of a playground in the winter, with a couple playing out one final act in their relationship. I like this one.

“Marlene on the Wall” picks up the tempo a tad as the first track with Sue Evans on drums. It has a soft jazz-rock feel to it. It was also the first single released from the album, but it only made a slight impact on the UK charts (peaked at number 83). It did a bit better upon re-released, getting up to number 21 on the UK charts.

The next single was “Small Blue Thing” which did slightly better (number 65 in the UK). The one continues the mid-tempo folk-rock sound. It is pleasant enough.

“Straight Lines” closes out the first side. It is another fairly safe sounding song, simple arrangements to support the Vega’s poetic verses.

Side two opens with “Undertow” and the use of a number of instruments not yet seen on the record so far. I can pick out violin and cello in the background; they add to the soothing sounds of the music.

“Some Journey” pretty much goes down the same route as the songs so far - nothing new or varied. The songs are starting to run together for me.

“The Queen and the Soldier” has a nice narrative to the lyrics. That helps make it a little bit more memorable for me. The organ is a nice addition to the instruments.

“Knight Moves” picks up the tempo again. The arrangement is interesting. The lyrics use chess pieces for their symbolism. Things seem to be picking up nicely as we near the end.

“Neighborhood Girls” has the most rock sound of any of the tracks, thanks to some electric guitars. I like this one as well; it is one I’d likely to seek out for a download.

My overall assessment: Suzanne Vega is a nice enough album. There are a couple standout tracks but the rest fall into a safe, comfortable and soothing category. Clearly the studio saw the potential Vega would have as an artist - the indicators are there. For me, I like songs like this on occasion - sprinkled in with other things. Back to back, though, not so much.
Posted by Martin Maenza at 5:11 AM