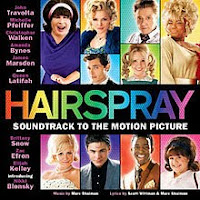 Back in June 2008, I had caught the 2007 film adaptation of the Broadway show Hairspray on cable and blogged my thoughts on the film. Today I want to do a specific focus on the songs from the soundtrack album.


After seeing the movie, I managed to download the MP3s for this one from emusic.com. I got a good a deal - 19 tracks for only 12 credits (this was before the conversion to price-per-track that they do now) so it basically cost me $4 for the record.

Let’s break them down in order of appearance in the track listing.

Newcomer Nikki Blonsky opens it up with “Good Morning Baltimore”. The song sets the tone nicely for the film - a great 60’s feel to it. And Nikki has a beautiful voice, pleasant and welcoming. She's perky, positive and confident. You can’t help but root for her “Tracy” to succeed.

James Marsden sings “The Nicest Kids In Town”. I first became familiar with the actor in the role of “Scott Summers/Cyclops” in the 2000 film X-Men. Right after in 2001, he did a half season of Ally McBeal playing “Glenn Foy” (he even showed his singing skills on the show). He has a wonderful voice and outgoing personality, perfect for local TV dance show host “Corny Collins”.

Zac Efron, one of the stars of the Disney Channel High School Musical film franchise, delivers “It Takes Two”. The song is delivered in a traditional late 50’s doo-wop style.

Next up is “(The Legend of) Miss Baltimore Crabs” by the one and only Michelle Pfeiffer. She delivers this one with a great bit of attitude and snide snobbery. Even twenty five years after Grease 2, she shows she’s still got it.

Nikki is back with “I Can Hear the Bells”, a sweet ballad about the amazing power of the emotion of love. It is very reminiscent of the Chiffons.

Zac returns with “Ladies’ Choice”, my second favorite song from this film. I love the upbeat tempo to it, with the rousing piano and driving drums.

Brittany Snow tells us about “the New Girl In Town”. It is very much in the vein of the girl groups of the era.

Nikki teams with John Travolta for “Welcome To the 60’s”. Nikki’s vibrant energy infuses the song with a perky attitude. Travolta, in drag as “Edna Turnbladt”, however wasn’t a win for me. I just didn’t like his “female voice” at all.

Next is Elijah Kelly with “Run And Tell That”. It owes a lot to the Motown sound, particularly a young Stevie Wonder or an Al Greene.

All hail Queen Latifah on “Big, Blonde & Beautiful”. She shows the vocal chops that won her accolades for Chicago. Then Travolta and Pfeiffer do a reprise of the song. I love the idea of teaming the stars from the films Grease and Grease 2; I wish they had done a more substantial duet together though.

Travolta teams up with Christopher Walken on “(You’re) Timeless to Me”. The song has a bit of a big band swing to it. It is my least favorite track from this soundtrack though.

Queen Latifah is back with “I Know Where I’ve Been”, a moving gospel song that gives focus to the inequalities between the races in the United States up to the 1960’s.

The teen leads (Zac, Nikki, Elijah and Amanda Bynes) sing “Without Love”. The lyrics of this pure pop song move the story along well.

James Marsden returns with “(It’s) Hairspray”. This one allows him to do a swinging ballad ala Frank Sinatra; he delivers it with pure perfection.

The cast comes together on “You Can’t Stop the Beat”, a rousing dance number near the end of the film. I like this one a lot - probably one of my favorites from this record. It is really hard to keep you feet still when this one comes on.

Queen Latifah leads the cast on “Come So Far (Got So Far to Go)”, the first of three songs to run over the film’s credits. It is pretty generic in lyrics and sound - perfect if you’re trying to read all those scrolling words on the screen.

The final credit song is “Mama, I’m A Big Girl Now” (you knew I’d get my second Mother’s Day weekend reference in somehow, didn’t you?) by Nikki, Ricki Lake and Marissa Jaret Winokur. What is really special about this teaming is that you have the three women who portrayed the character “Tracy Turnblad” all in one place (Ricki played the role in the original John Water’s film and Marissa played the role on Broadway). It is one of those songs that gets stuck in your head, at very least the refrain.

I have to say I’m fairly pleased by this cast. From newcomers to people who have been in the industry for a number of decades, they filmmakers managed to create a good mix, yielding an entertaining film and album. I can certainly see why the kid/teens enjoyed this one back in 2007. It was a nice reminder of the films they used to make decades ago.
Posted by Martin Maenza at 8:01 AM