Bruce Springsteen - Born In the U.S.A. 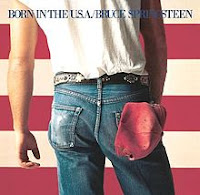 On June 4th of 1984, New Jersey rocker Bruce Springsteen released his seventh studio album Born in the U.S.A.. Backed by his E. Street Band, the Boss took a different direction from his previous release Nebraska; this new album contained songs of hope and were much more uptempo.

The record was a commercial success. It was the best-selling album of 1985 in the United States. It was also Springsteen’s most successful album ever: it produced seven Top 10 hits (tying Michael Jackson’s Thriller and Jane Jackson’s Rhythm Nation 1814.

Side one opens with the title track. “Born in the U.S.A.” was the third single from the album; it peaked at number 9 on the US Billboard charts. The lyrics of the song focus on the effects of the Vietnam War on American soldiers who fought hard for their country. Ironically, the song is often interpreted as a patriotic anthem, which it is clearly not (the opening might be what confuses them). Ronald Reagan used the song as part of his 1984 re-election campaign.

Number 7 was the highest chart position that “Cover Me” attained. The song was originally written for disco dance-queen Donna Summer, but Springsteen’s manager convinced him to keep the track instead. I like the strong piano line on this one that serves as the foundation for the other instruments and the vocals. A remix version of the song proved to be very popular at clubs in the fall of 1984.

“Darlington County” is a song whose story is set in the same name county in South Carolina. The opening guitar and percussion, and the sing-along sha-la-la chorus make it a very catchy track.

“Working on the Highway” has steady rockabilly melody and title refrain that gets stuck in your head. It is my favorite song from this album (I’ve rated it a five-star in iTunes). My feet get to moving right out of the gate and don’t stop for over three minutes. The lyrics have a typical Springsteen blue-collar feel to them.

The album-oriented-rock stations really took to the deep track “Downbound Train”. The guitars meander at a mid-tempo pace, emulating a locomotive moving through town.

The side closes with “I’m on Fire”, the fourth single from the album. It reached the number 6 position after twelve weeks on the charts. This is one of those songs I always find myself singing along to - from the opening “hey, little girl, is your Daddy home?”. I like the clean musical arrangement on this one; it isn’t overly complex - just straightforward.

“No Surrender” is the first track on side two. This high-tempo deep track did very well on the Mainstream Rock Charts (it got as high as number 40) even though it was not released as a single. This has a classic Springsteen sound to it, harkening back to the days of the Born to Run album.

The song “Bobby Jean” is often considered to be written about long-time friend and band mate Steven Van Zandt who was leaving the band. The lyrics speak of a long-friendship and a departure without goodbye. It was one of the last songs written for the album.

“I’m Goin’ Down” was the sixth single from the album to break the Top 10. It peaked at number 9 after nine weeks on the charts. The song bumped “Pink Cadillac” from the album, causing the later to be moved to a B-side of a single. Personally, I’m a huge fan of “Pink Cadillac” - it was a great dance tune with that searing saxophone. It was later recorded by Natalie Cole, giving the rockabilly song a more R&B flavor. As for “I’m Goin’ Down”, it is a pretty good song - it has that title-repetitive chorus that everyone can pick up quickly.

“Glory Days” was the fifth single from the album. After thirteen weeks on the chart, its highest position was number 5. The lyrics tell of a man who looks back on his so-called glory days of high school, when he was a popular athlete; now he sits back with his old friends in a bar and reflects on how much he would like to recapture those moments again. This song is my second favorite from the album (a four-star rating in my book). I like the mandolin used on this one. Even though I was only a couple years out of high school at the time when it came out, I could understand the lyrical themes and see how they could be very relatable to an older generation. Today, as someone beyond four decades of living, I understand these lyrics even more so.

The highest charting track from the album was “Dancing in the Dark”, which reached number 2 after fifteen weeks on the charts. Prince’s “When Doves Cry” denied it that number 1 status. “Dancing” features up-tempo synthesizer and a variety of drum rhythms which made it very danceable. Like “Cover Me”, it too had a musical remix that was very popular in the clubs in the summer and fall of 1984. The video is fondly remembered thanks to the appearance of a very young Courtney Cox who comes up on stage and dances with the Boss. .

The final track is “My Hometown” which was also the last single released from this album. It was on the Billboard charts for nine weeks, peaking at number 6. It also was a number-one hit on the Adult Contemporary charts. It is ballad that evolved out of the acoustic work done on Nebraska. The lyrics and Bruce’s somber vocals give it a melancholy feel.

As you can probably guess, this is one of my favorite Bruce Springsteen albums. It came out during my early college years and was very popular. I purchased a copy on cassette and played it in my car and on my boom box quite a lot over the next four or so years. The songs crossed over from the rock charts and into the club scene, permeating many walks of life. You could not go anywhere where there was music without hearing a song from this record in an hour or so time period. For me, the entire record is rock-solid from start to finish. It is one I can put on and know I’ll listen to each and every track through. I agree with Rolling Stone magazine - easily one of the top albums of the 1980’s and a must-have for anyone who loves that decade of music.
Posted by Martin Maenza at 5:19 AM

I have owned both "Born in the U.S.A" and "Nebraska," and consider them to be flip sides of the same coin, kind of like "Rust Never Sleeps."

The thing that fooled people about "Born in the U.S.A." may have been the instrumentation - people who heard the keyboard jingle on the chorus never bothered to listen to the words. This is one case in which the parody of a song is equal to the original - not only did Cheech & Chong's "Born in East L.A." make its points about social injustice more clearly, it was also sung in a lower key.

I agree - many did not listen to the lyrics on "Born In the U.S.A.". I also remember Cheech's "Born In East L.A." song - definitely a song in a similar vein even though some would dismiss it purely as parody (it wasn't).