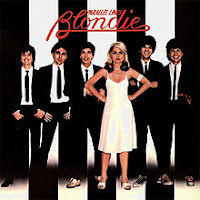 Welcome to another edition of “Seventies Saturday”.

September 23rd of 1978 saw the release of Parallel Lines, the third studio album from the American new wave band Blondie. While the album was a top-10 seller in the US (it peaked at number 6), it was over in the UK where the album would achieve its highest status - a number 1. Besides being one of the band’s best-selling albums (over 20 million copies sold worldwide), it was also a critical favorite as well. Rolling Stone magazine ranked it number 140 on their 500 Greatest Albums of All Time list.


The distinctive sound of a busy signal opens up the album with “Hanging on the Telephone”. The song is very up-tempo; I like the oscillating notes before the chorus. This is a song I hear all the time on Sirius/XM 1st Wave.

“One Way or Another” was the second single from the album to chart in the US (peaking at number 24). It also was released as a single in Canada. Debbie Harry based the lyrics on an ex-boyfriend who stalked her after their initial break up. As one of the band’s most signature songs, it has appeared in over a half dozen films and on a number of television shows. The guitar opening is a classic. I like when we’re playing Rock Band - my son gets to do the guitar parts while I growl out the lyrics in my best Debbie Harry impression (not hard to do as I know this song by heart - been a fan since I bought it on a 45 back in the 70’s as a teenager).

“Picture This” was the first single released in the UK, reaching number 12 on the charts. The studio however was not as confident in the song and thus did not release it as a single in the US. It has a bit of a 60’s feel to it vocally. The accompaniment is straight-forward rock and roll. The combination works well.

“Fade Away and Radiate” has an apocalyptic drum-beat to it. The rest of the instruments are equally ominous and tie well with the lyrics. Debbie’s steady vocals are like a beacon in the night, guiding the listener through the musical carnage.

“Pretty Baby” too has that 60’s feel to the vocals, but this time more of an early 60’s take. Clearly the band liked to take the kind of music they grew up on and give it a little bit of a new spin. That kind of re-invention appeals to me a lot.

“I Know But I Don’t Know” closes off the side. The keyboards on this one definitely give it that new wave slant. The lyrics are very much on the indifferent side, laid back and uncommitted.

The second side opens with “11:59”, another up-tempo track. Jimmy Destri wrote this one and features a solid keyboard line for him to play.

Next, the band asks “Will Anything Happen?” The screaming guitars and pounding drums clearly emphasized the band's punk/new wave foundation. This is one you’d expect was a regular part of their set-list at CBJB; it would appeal to the type of crowd at that Manhattan club.

“Sunday Girl” was not released as a single in the US, but it did very well in the rest of the world; it was a number 1 hit in the UK. The song has a nice swaying rhythm and classic rock vocal. I like the clap-along bridge. I can certainly see why it did so well in the UK.

“Heart of Glass” was the third single released, and it did extremely well. An earlier version of the song was entitled “Once I Had Love”; it was much slower and had a more basic disco beat. The newer version made for the album had a much heavier disco rhythm to it. This, of course, caused the band some strife in the New York City punk/new wave scene where they had risen. It appeared that the band sold out by going down this route. It did bring the band much notice and success though; the single spent fourteen weeks on the Billboard charts including one week in the number 1 spot. It was the first number 1 hit for Blondie and certainly not the last. I had this one on 45 as well - and being a disco fan I enjoyed the beat a lot.

“I’m Gonna Love You Too” is a cover of the Buddy Holly song from 1957. It was released as the second single from the album, yet it failed to chart in the US. The studio held off releasing it worldwide until after some of the other songs hit. The band really has fun with this one, filling it with high energy and sassy attitude.

The album ends with “Just Go Away”. It too has a sassy, F.U. attitude (yet they didn’t have to resort to the use of profanity like Cee Lo does today). This is why I like the classics - they have a good amount of class.

I really enjoy this album a lot. It has a nice mix of musical styles; Blondie was constantly trying out things (one reason why they are a favorite band of mine). The big hits take me back to junior high school - listening to the radio a lot on weekends and all through the summer. This was a time where I was solidifying my musical tastes, and Blondie was a part of that music foundation that would carry on into the 80's.
Posted by Martin Maenza at 9:19 AM