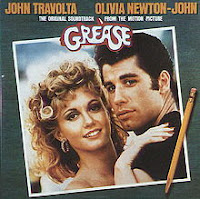 Note: this blog post/review is dedicated to Jeff Conaway who played "Kenickie" in this film as well as starred in shows like Taxi and Babylon 5. The 60-year old actor died Friday morning 5/27/11 at Encino Tarzana Medical Center, where he had been hospitalized in a coma since 5/11/11. Jeff battled with drug addiction for many years, including to pain-killers which were needed to counter physical ailments from which he suffered. May his spirit rest in peace.


It was the summer of 1978, and I was spending my time doing what most other thirteen year olds did - swimming on hot sunny afternoons, riding my bicycle all over town, buying candy or ice cream at the local corner store, and just forgetting all about school for a few months. But, there was a film in the box offices that was bringing everyone to school - the story about a 1950's class from Rydell High School. Of course, I am referring to Grease which starred John Travolta, Olivia Newton-John, Stockard Channing, and Jeff Conaway. With a budget of $6 million to make, the film turned out to be a goldmine for Paramount Pictures - bringing in almost $400 million worldwide.

The double-disk soundtrack album was equally a success (one of the biggest film-related records to date). The album went to number 1 on the Billboard 200 charts (it spent ten weeks at that spot, but not consecutively) and the UK album charts in 1978. It then had a big return on the Australian charts first in 1991 and again in 1998, landing at number 1 there both times. Its sales figures are reported at 28 million copies worldwide.

I remember it being a big seller in my small western NY hometown. Despite a nearly $20 price tag (unless you were lucky and found it on sale for around $15), it was a record that everyone who saw the film wanted to own. It took a bit of allowance for me to buy this one on vinyl, but I played the heck out of that record (thus well worth it). In more recent years, I've since picked it up on CD. I'll break it down across the four sides as I remember listening to them on my turntable over thirty years ago.

Side one begins with the title sequence song "Grease". Written by Barry Gibb and sung by Frankie Valli, the song packed a powerful punch that took this second single all the way to number 1 on the Billboard single charts. The song doesn’t have a fifties feel to it at all, which I like. It draws more from the disco sounds that the Bee Gees were masters of at this point in time.

Travolta and Newton-John team up for "Summer Nights", the third single from the album. This one reached number 5 in the US and number 1 in the UK. During my final year of Middle School (eighth grade Spring of 1979), a group of my classmates re-enacted this song and scene, with full costumes and choreography, for the school talent show. I'll always remember Danny and Darcy as "Danny" and "Sandy" when I hear this song. Great sing-along song, perfect for karaoke with a group.

Newton-John then delivers the ballad "Hopelessly Devoted to You", the fourth single. The song went all the way to number 3 on the Billboard charts in the US. It was written by her long-time song collaborator John Farrar, thus it sounds like the typical country music songs she was releasing in the 70’s. I am very much a fan of her country side as well as her pop side.

The two big stars pair back up for "You're the One That I Want", the number one chart-topper on both sides of the Atlantic. The piano and guitar on this one set up the catchy hooks. I can fondly remember this single being played on the radio all of the time - whether it was while in the car, listening to my stereo in my room or from the small radio by the lifeguard stand near the deep-end of the country club pool. This song always makes me think of carefree summers.

Travolta then croons the ballad "Sandy", the fifth single. This one does have a bit of a fifties feel to it, thanks to the writing of Louis St. Louis. Travolta handles his vocals smoothly, playing on his earlier musical theatre and recording career in the 70’s.

Side two features the former 50's teen heart-throb Frankie Avalon who drops some knowledge on Didi Cohn's character with "Beauty School Dropout". The lyrics on this one are very playful and clever. You have to be careful or you find yourself singing along with this one. I know I do.

Stockard Channing and the girls get all catty with "Look at Me, I'm Sandra Dee". Again, another playful song with a hint of innuendo to it.

"Greased Lightning" by Travolta was the sixth and final single. Unlike the others that easily cleared the top 10, this one failed to make it into the top 40 in the US. Most likely, by this point late in the fall of 1978 most people who were fans of the film already had the album (thus no reason to purchase the single). Jeff Conaway assists with some of the back and forth on the verses. It really has a nice groove to it. One other thing that stood out on this one was how vulgar the lyrics were - with a number of words that helped make the film PG rated. Had there been parental advisory stickers back in 1978, this song would have gotten the record labeled. How many kids were going around singing “s**t”, “t*t” and “p***y wagon” after this record came out? LOL. The single was editted so that could have contributed to its poor chart performance.

Next up is Cindy Bullens and "It's Raining on Prom Night". The instrumental "Alone at the Drive-in Movie" follows. Both are songs I never was a big fan of, and I skipped importing them off the CD too. More about them later.

Sha-Na-Na closes the side with their cover of "Blue Moon". The original song was recorded in 1935, but Elvis Presley scored big with it in 1956.

Side three mostly belongs to Sha-Na-Na as they perform five of the six tracks. "Rock n' Roll Is Here to Stay" (originally recorded by Danny and the Juniors in the 50‘s), "Those Magic Changes" (an original song penned for the film), "Hound Dog" (done by many in the 50‘s including Big Mama Thorton and Elvis), "Born to Hand Jive" (another original for the film - a track I just love in the film because of the high energy and choreography), and "Tears on My Pillow" (another doo-wop classic from 1958 first recorded by Little Anthony and the Imperials). All of these songs are done very well. Sha-Na-Na did an incredible job helping to bring this genre back to the fore-front. I remember after the movie they got a syndicated half-hour music variety show that I used to watch every Saturday night with my grandmother. Good, clean fun.

Louis St. Louis and Cindy Bullens close the side with "Mooning". I really don't have any comments about this one; I often skipped it whenever I was listening to the record back in the day. I always wondered why "Blue Moon" from side two was not swapped with this track, making the whole side fully devoted to the popular greaser band. It would have made more sense logically, in my humble opinion.

Side four is a mixed bag. Bullens is back with "Freddy, My Love". St. Louis then provides "Rock n' Roll Party Queen". Of the two, I prefer the later - again St. Louis gets that 50’s vibe down well on this original track.

Channing returns for her ballad "There Are Worse Things I Could Do". She actually has a good voice, having gotten her start on Broadway in 1971. Now, you just have to close your eyes and forget she was a 33 year old playing an 18 year old. I guess “Betty Rizzo” got left back a bit.

Newton-John reprises "Look at Me, I'm Sandra Dee" as her character has an epiphany.

Newton-John and Travolta then have their final number with the rest of the cast on "We Go Together". This a nice bouncy song that, in the film, showcased everyone briefly on the lyrics. This song reminds me of high school a bit - that song about friends always being there for one another. Since shows like Happy Days and Laverne & Shirley were still big during those years along with this film and American Graffiti, my generation felt right at home with all the 50’s nostalgia.

The record then closes out with the instrumental "Love Is a Many Splendored Thing" (from the film of the same name) and a reprise of "Grease" by Frankie Valli.

For me, personally, I've always felt this soundtrack was a little bit bloated. Yes, the film had a lot of great songs in it sung by the cast as well as some good background music (all the Sha-Na-Na tracks). However, putting every single one on the record seems like a bit of overkill to me. But, what likely happened was that there were too many good songs to fill a single disk so they just decided to go with a double-record. That meant scrapping the barrel for filler, either with tracks that had minimal impact on the film or those that you can barely recall were in the film to begin with (I'm looking at you, Cindy Bullens and Louis St. Louis).

Despite all that, though, the majority of this record is an important part of my teenaged years. It represents a summer of fun and a film I saw twice in the theatres (one of the few times I'd ever done that). Even today I enjoy the music and the film. If I run across Grease on cable, I'll usually end up watching it no matter how far along they are - even though I own a copy on DVD.

Grease is (and always will be) the word!
Posted by Martin Maenza at 8:03 AM