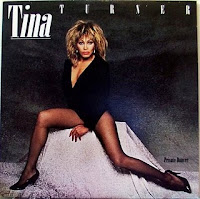 Sometimes the fifth time is a charm.

Tina Turner had been active in the music business for over 25 years; first as one half of a 60’s duo with then husband Ike Turner and later as a solo artist starting in 1974. It took ten years and one amazing album to make her a solo super-star. It was all due to her May 29th of 1984 release Private Dancer.


The album was both a commercial and critical success. It is estimated that the record has sold over 20 million copies worldwide. Private Dancer is ranked by Rolling Stone magazine as number 46 on their 100 Greatest Albums of the 80’s list.

I had this album on vinyl - bought during my freshmen year of college. The image posted above is the alternate cover of the record - the original US cover; that’s how I remember this one. I think it is much more flattering, showing off those amazing legs of the (then) 45-year old Turner.

Side one opens with “I Might Have Been Queen”. The up-tempo track is about a woman who believes she was an Egyptian queen in a former life; Tina’s dramatic vocal skills sell it very well.

Next up is the number 1 smash “What’s Love Got To Do With It”. It was her first solo top ten single and her only, to date, number-one hit in the US. The song has a very catchy hook and chorus, and all the instrumentation is layered nicely to create a fantastic song. No wonder it earned her three Grammy awards in 1985 - Record of the Year, Song of the Year, and Best Female Pop Vocal Performance.

“Show Some Respect” was the fifth single from the album to break into the Billboard Top 40 (however it only got to number 37). This one has a nice bouncy rhythm to it that I like a lot. This song and the whole album, in fact, have a nice harder rock edge. Tina clearly showed that she could handle more than just R&B. The B-side of the single is a live cover of the Prince song “Let’s Pretend We’re Married”.

“I Can’t Stand the Rain” is a cover of the Ann Peebles 1973 hit. This version has an interesting percussion line to it. Listening to it with headphones on, I note the effects moving from one side to the other. On the second verse, more instruments come in to build the song to a crescendo. This version definitely stands on its own two feet.

The side ends with the fourth single “Private Dancer”, which was on the charts for twelve weeks topping out at number 7. The song was written by Mark Knopfler of Dire Straits and features guitarist Jeff Beck. It tells the story of a prostitute with a cold, unemotional approach to business. Again, Tina sells this one expertly.

Side two opens with the first single “Let’s Stay Together”, a cover of the song made famous by Al Green in 1972. Tina’s version, which was produced by the Heaven 17/B.E.F. production team, made it to 26 on the Billboard charts. The opening is simple - Tina’s powerful voice and a light accompaniment. Then the drums and backing vocals kick in for the second verse. The song manages to pay homage to the original and put a more modern spin on it at the same time.

“Better Be Good To Me” was the third single which broke the top 10 and settled nicely at number 5. It was originally released in 1981 by a New York City rock band called Spider. Tina gives this one a whole lot of attitude as the lyrics dictate. This was a popular song at parties and in the bars; I know I’ve danced to this one on a number of occasions.

“Steel Claw” is a cover of a track from Paul Brady's 1983 album True For You. This deep track is a favorite of mine; I like the rapid-fire vocals and guitar on it. It definitely makes for a nice surprise on those play lists.

Tina next covers the 1965 Beatle’s classic “Help!”, but in a slowed-down tempo. On this one, she gets a musical assist from the Crusaders, an American band known for their jazz, pop and soul fusion sound. Once more, she makes this song her own.

The album closes with “1984”, a cover of the 1974 David Bowie song from his Diamond Dogs album. Tina gets a little assist from the guys from Heaven 17 on this one (they provide music and backing vocals). As a huge Heaven 17 fan, I really like this one too.

One might question why so many songs on this record are covers. Though, if you look back at her career this isn’t unexpected. Ike and Tina often mixed their records with a generous helping of interpretations of other artists’ songs. Back then, if you put out multiple albums a year (as many bands did) being able to do justice to someone else’s songs was a plus.

Overall, I think this is a fantastic record; the songs are all well-done and varied in sound. I don’t get bored listening to this one at all.
Posted by Martin Maenza at 5:24 AM