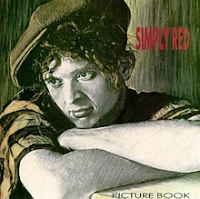 In the fall of 1985, the British pop group made their debut with Picture Book. The record reached number 2 on the UK album charts, selling over 5 million copies. In the US, it went to number 16 on the Billboard album charts and sold over a million copies as well. Five of the tracks were released as singles, doing very well in the various markets.


The album opens with “Come to My Aid”, the second single released. The song has a funky bass line played by Tony Bowers that would make Chic‘s Nile Rodgers proud. It is perfectly suited for lead singer Mick Hucknall’s soulful voice.

“Sad Old Red” is a nice jazz number. It instantly takes me to a smoky club; on the intimate stage are a pianist, a big bass player, a horn player and singer. Just listen to Fritz McIntyre dance his fingers across those eighty-eights. Perfect.

“Look at You Now” could easily have been a decent club track. The dance beats along with Tim Kellett on the trumpet really get me moving.

“Heaven” is a cover of the 1979 song from the Talking Heads‘ album Fear of Music. I’ve never heard the original, but this one is incredibly soulful. The song is about a bar called ‘Heaven’, a peaceful retreat. Just listening to this one relaxes me.

“Jericho”, the fourth single from the album, closes out the side.

Side two kicks off with the smash hit “Money’s Too Tight (to Mention)”, the first single from the record. The Valentine Brothers recorded it originally. The lyrics talk about the economic hardships of the late 70’s and early 80’s, taking a stab at Reaganomics, the economic policies that came about during Ronald Reagan’s terms as the President of the United States. I love the line “did the Earth move for you, Nancy?“ I fondly remember dancing to this one back in the day - it was very popular in the clubs.

“Holding Back The Years” was the third single released. . It was re-released in 1986 where it did even better, scoring a number 2 in the UK and a number 1 hit spot on the US Billboard singles chart (bumping Billy Ocean‘s “There‘ll Be Sad Songs (To Make You Cry)”). The song was written by Hucknall while still a teenager living at home with his father. It is a great slow dance song (I remember swaying to this one a lot back in the day).

“(Open Up the) Red Box” has a classic Stevie Wonder feel to it, with that solid piano opening. McIntyre does double duty, providing some backing vocals as well. A solid R&B groove.

“No Direction” has a more modern funk feel to it, picking up a few pointers from the Minneapolis sound. I really like how the band mixes things up a little, making sure the songs don’t get to stagnant by sounding all the same. A sign of a good album construction.

The album closes with the title track “Picture Book”, a slower tempo number. Hucknall’s vocals are incredible here and through out the record.

While I was very familiar with the hit songs from this one, Picture Book was not one I has in music library. That’s something I am going to quickly remedy as soon as I get my next allotment of downloads on emusic at the end of the month. I think this is a fantastic record from start to finish.
Posted by Martin Maenza at 5:15 AM