the Smiths - Meat Is Murder 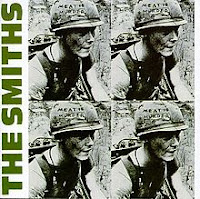 Meat Is Murder was the second studio release from British alternative band the Smiths. This 1985 album (from February 11th of that year), produced by singer Morrissey and guitarist Johnny Marr, was the band's only number one charted UK album. And while its sales in the US were marginal (it only reached number 110 on the Billboard Album chart), it was a critical favorite. Rolling Stone magazine ranked it at number 295 on its 500 Greatest Albums of All-Time list.


Side one opens with "The Headmaster Ritual", a song against corporal punishment. The guitar work immediately makes me think of early R.E.M. The lyrics focus on life at a boarding school where physical discipline is par for the course.

"Rusholme Ruffians" contains some cool rockabilly guitar riffs by Marr. The lyrics tell the story of some young punks in the Manchester suburb. "I Want the One I Can't Have" continues the same sound on the music. These are both tracks I have bookmarked for a download in the future.

"What She Said" has a rocking sound to it; I like it a lot. I’d actually like it more without the vocals - they seem to take the edge off the song, for me.

"That Joke Isn't Funny Anymore" was the only single released from the album; it went to number 49 in the UK and number 20 in Ireland. The lyrics comment on the effects that derogatory language and bullying can have on a person's self-confidence, so much so that the person might consider suicide. The music, with its melancholy sway, compliments them perfectly.

The unforgettable oscillating chords on "How Soon Is Now?” kick off side two. It was originally released as a B-side from the 1984 single "William, It Was Really Nothing", but many clubs started playing the track as well; the popularity of the song lead it to be included on this album. The lyrics, consisting of one verse repeated twice plus a chorus and bridge, are very much is a plea from someone who is very shy that just wants to be loved. The album features the near-seven minute version which allows for the arrangements to really take a good long run, working out the musical muscles. This is my favorite track of the ten.

"Nowhere Fast" is a bit light-hearted, with a very up-tempo pace. I get the feel of a locomotive rushing down the tracks. This is my second favorite track from this album.

"Well I Wonder" has a pleasant melody to it. The lyrics counter it though with the sad thoughts of someone who is hardly on the radar of the one he fancies.

"Barbarism Begins at Home" touches again on the anti-corporal punishment theme. It features some funky bass playing by Andy Rourke which I really get into.

"Meat Is Murder", as the title suggests, is a pro-vegetarian track. The opening is rather ominous, with the unidentified “machine-like” sounds and the mooing cows. Morrissey is a firm believer in animal rights, so much so that he forbade any of the rest of the group from being photographed eating meat.

I must admit that I'm more of a late-comer to the Smiths in general and this record in particular. In 1985 I was much more into the pop, dance and R&B scene though I had some passing familiarity with a few of the songs. My wife was much more into the alternative bands like the Smiths, the Cure, etc. and it was through a greatest hits collection that I was exposed to more of the tracks. And since my van's satellite radio is most often parked on Sirius/XM 1st Wave, I usually hear the Smith's at least once a day.

Overall, I really like the music on this record. I think the band really puts down some great sounds. What takes a few points off for me (and I know I’m not going to be popular when I say this) is Morrissey’s vocals on a few of the tracks. In some cases, they just don’t “fit” for me; I find them at odds with the music. Now, maybe that is intentional - I don’t know. But when contrasts like that occur I tend to like the song a little less. Ah well.
Posted by Martin Maenza at 6:09 AM