the Pogues - Rum, Sodomy and the Lash 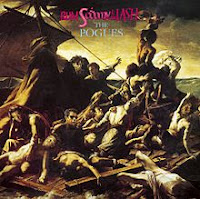 The title from the Pogues second studio album was taken from a quote from Winston Churchill. The cover of Rum, Sodomy and the Lash is based on "the Raft of Medusa" by French painter Théodore Géricault (1791-1924). The August 1985 launch for the record was done on the HMS Belfast, a former Royal Navy cruiser turned museum ship that is permanently moored in London on the River Thames. That's a lot of history tied into this Celtic folk-punk offering, but it makes sense. A number of the tracks are reinterpretations of traditional folk songs. Elvis Costello was the producer of this record.


The album is a critical favorite. It ranked number 93 on Q magazine's "100 Greatest British Albums ever". Rolling Stone ranked it number 445 on their 500 Greatest Albums of All-Time list. Pitchfork Media ranked it 67 on their best albums of the 1980's list.

Once more, this is an album I’ve not heard completely before today. So, I’m giving another first-impression review.

Side one opens with "The Sick Bed of Cúchulainn" and Jem Finer on the banjo. Shane MacGowan then begins with traditional vocals for the first verse. When the rest of the band joins in for the chorus, though, that’s when it explodes. Very lively, very edgy. If this song is setting the tone for the rest of the album, I think this is going to be a fun one.

James Fearnley on accordion and Finer on banjo are featured on "The Old Main Drag". The song is about the denizens of the streets - the con-men, the prostitutes and the like; the lyrics contrasted with the traditional folk sound it makes for an interesting combination.

"Wild Cats of Kilkenny" announces itself with a wailing shriek, like an alley cat whose tail has been just stepped on. This instrumental track is a lively composition and a pleasure to listen to.

"I'm a Man You Don't Meet Every Day" is a traditional Irish folk song. The lyrics tell the tale of a rich man who buys rounds of drinks for the patrons of a pub. The vocal duties for this one fall to one of the gals in the band, bassist Cait O’Riordan.

"A Pair of Brown Eyes" was the first single from the album; it reached number 71 on the UK charts. The melody is that of "Wild Mountain Thyme", a traditional Scottish song. This is one of the songs I was previously familiar, having it on a CD compilation. Like most of the original compositions so far, this one was penned by MacGowan. I have to compliment him as it has a very much traditional feel to it.

"Sally MacLennane" was the second single released, and it reached number 54 on the UK charts. The title refers to a type of stout, a dark beer popular in London pubs. It is an up-tempo jig, worthy of a drunken sing-along.

The instrumental "A Pistol for Paddy Garcia" has a nice Spanish-western influence to it. It reminds me of a Clint Eastwood film. I like the mix with the traditional Irish-folk sound.

Side two opens with "Dirty Old Town", a remake of the 1949 song by Ewan MacColl. The lyrics paint a bitter picture of industrialized northern England. This was the third and final single from the album; it reached number 62 on the UK charts and number 27 on the Irish charts. I like the opening harmonica on it.

"Jesse James" is a cover of the 1924 folk song by Bascom Lamar Lunsford. It tells the tale of the infamous American western outlaw. This is the first song on the record that I didn’t take an immediate liking to. Maybe it’s the lead male vocals (not sure who did them). Ah well.

"Navigator" puts things back on track. It is another song about the activities of the working class - a good salt of the Earth kind of song.

"Billy's Bones" gives us another up-tempo jig. Shane MacGowan gets a good workout here, trying to keep up vocally with the pace of the music.

"The Gentleman Soldier" is also a traditional folk song, reinterpreted for a modern audience by the band. The opening is a bit of a classic revelry. Andrew Ranken’s drums make a great “gunshot” sound with their rat-a-tat-tat.

The album closes with "And the Band Played Waltzing Matilda", a cover of an anti-war song written by Eric Bogle in 1971. While dozens of artists have covered it over the decades, this one by the Pogues is probably the best-known version. It is the longest track on the album - a full eight plus minutes. This really allows the band to work this one out nicely, to let the song unfold with such beauty and grace.

I have to say that I really like this album a lot. I’m a fan of this kind of Celtic-folk music; it puts me in a relaxed kind of mood. What I like too about this record is that it has a timeless sound to it. While listening to it, I don’t think 1980’s - I think of the 1800’s or older.
Posted by Martin Maenza at 5:17 AM