Barry Manilow - Tryin' To Get the Feeling 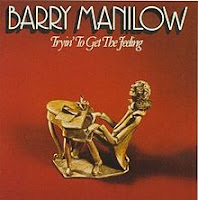 In 1975, Barry Manilow released his third studio album Tryin’ to Get the Feeling. This record continued the popular momentum of his previous release, scoring him a top 10 album (it peaked at number 5). The record went on to be certified as triple platinum.


“New York City Rhythm” opens the first side. I have to admit that I am very partial to songs that celebrate the aspects of New York City. As a kid, I always was fascinated by the Big Apple - thanks to movies, TV shows and even comic books. It seemed like a place I wanted to be. I eventually got to visit the city a few times in the mid-80’s and I enjoyed it a lot. Barry’s song spotlights a number of aspects of the metropolitan area, including a little Latin flavor.

Next is the title track. “Tryin’ to Get the Feeling Again”, the second single from the record, spent ten weeks on the charts and reached number 10. The lyrics speak to a possible reconciliation between former lovers. I like this one a lot too. I’m such a sap when it comes to love songs, even songs about former love - funny because in 1975 when this came out I hardly knew what love was even about. The Carpenters recorded a version at the same time but never released it until a collection in 1995.

“Why Don’t We Live Together” has so many sounds going on with it. It starts with an organ, and then there are some full symphonic strings, a bit of a funky riff, and a little Calypso rhythm. You’d think it would be a mess, but it flows together pretty well.

“Bandstand Boogie” was used as the theme song for the long-running ABC music program American Bandstand. I would watch the show every Saturday after lunch during the 70’s and early 80’s, to catch my favorite acts performing the top hits and new releases of the day. The song has a nice swing to it.

“You’re Leaving Too Soon” has a little bit of a country feel to it thanks to the steel guitar that is prominent on the track.

“She’s a Star” closes out the side. This piano ballad tells of the eventual success of a popular female singer. The music starts out with a simple piano opening but eventually explodes into a huge production, just like the meteoric rise of a career.

“I Write the Songs”, a song Manilow ironically did not write (that would be Bruce Johnston of the Beach Boys) kicks off the second side. It was the first single released and Barry’s second number one record. This is my favorite track from this album, one I easily find myself singing along to. It is a great composition and a wonderful recording. Pure, classic 1970’s.

“As Sure as I’m Standin’ Here” is a beautiful piano ballad.

“A Nice Boy Like Me” has a rocking tempo to it with a little ragtime piano too. He has a nice back-and-forth with his background singers, something I am sure transitioned well to the live shows. I remember catching one of his concerts on HBO in the early 80’s, and they looked like a lot of fun.

“Lay Me Down” is another piano ballad, something that Barry excels at. I love the simplicity of just the voice and the keys (and a sprinkling of drums), together making wonderful music together.

“Beautiful Music” closes out the record. It is a nice bookend to “I Write the Songs” which started this half of the record.

Folks tend to fall into two camps when it comes to Barry Manilow - love him or hate him. I’m firmly in the former camp. Sure, the music is straight-up pop music, mostly love songs, but Barry pulls them off so effortlessly. They are songs that, as a kid, I could listen to right there with my grandparents and feel comfortable doing so. You could hear them on jukeboxes (like the local diner at the plaza near where I grew up). It is music that is accessible to everyone and unoffending. That’s why I like his music and this album.
Posted by Martin Maenza at 8:28 AM

Email ThisBlogThis!Share to TwitterShare to FacebookShare to Pinterest
Labels: 70's, Barry Manilow, music, Tryin' To Get the Feeling