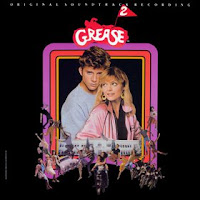 On June 11th of 1982, Grease 2, the not-so-famous sequel to the original film (which starred John Travolta and Olivia Newton-John), rolled into theatres. Unlike Grease, this one didn't have any top ten hits. It didn't have any mega-star power (most of the cast were relative unknowns at the time or had only appeared in a few films prior - but some went on to do some amazing stuff). It wasn't based on a Broadway show. It is also a film that is very polarizing - people either absolutely love it or they completely hate it. Very little middle ground. I most definitely fall into the former camp.


Is the soundtrack a good record? Casual music listeners wouldn't think so. And it probably isn't for everyone any way. It is very much a typical musical soundtrack - a cast that can sing well and harmonize (without being auto-tuned), and original songs with solid production value. If you've seen the film and like it, you'll like the album too. So, for fans, it is heartily recommended.

The Four Tops take us "Back To School Again" on the first track of side one. The 60's Motown group shows they've still got it on this song with a driving rock beat. The lyrics bemoan the start of another school year until the guy catches the eye of a cutie that convinces him that going to school might have some benefits. The number was used to open the film and introduce all the key characters. The song was released as a single; it made it as high as number 72 on the US Hot 100 charts and number 62 on the UK charts.

Michelle Pfeiffer, who starred as "Stephanie Zinone", belts out the next song "Cool Rider" with an ample attitude and sexy confidence. It has a slight new-wave tinge to it with a sprinkle of female rocker (ala Joan Jett or Pat Benatar) thrown in. In the film, she sings this one to point out that the man of her dreams has to be a hunky, motorcycle driving stud. Women do like motorcycles. For me, I just love this song - it is five-star rated in my iTunes. At the time this movie came out, I was completely infatuated with Michelle and her role in this film. In real life, I was a "Michael Carrington", the book smart but shy guy in school, and I wanted to be the one to get a girl like "Stephanie".

"Score Tonight", sung by the cast, is a double-entendre laden song. It uses bowling terminology as metaphors about getting some action. In the film, it was a large choreographed number set in a bowling alley - a lot of fun. I can recall going to the local bowling alleys a lot as a teenager (there was little else to do in the snowy western NY winters - we didn't have malls to hang out at) and secretly hoping the place would break out into a number like that. Never happened. Ah well. That didn't stop me from humming the tune while there.

"Girl For All Seasons" is a musical number by the girls in the cast. It is very much in the same vein of Neil Sedaka's "Calendar Girl" and similar songs from that era. This is the number that the girls perform in the school talent show. I always get a little bit choked up near that final verse as that is the part of the film where "Stephanie" realizes she may never see her new love again.

Next up is Peter Frenchette and "Do It For Our Country", another song with double-entendre about going all the way. This time it applies a patriotic theme, invoking the national pride the country was feeling in the early part of the 1960's when John F. Kennedy was President. Needless to say, in the film, things don't go quite as planned for his character "Louis DiMucci" when he tries to make the move on Maureen Teffy's "Sharon Cooper" in a bomb shelter.

The side ends with the whole cast and "Who's That Guy?". It is a big number with a rocking score; the lyrics ask the questions about a mysterious biker who appeared out of nowhere and wowed everyone. It is done in a typical split of the lines - guys and gals, giving the song various views on the same subject.

Adrian Zmed's "Johnny Nogerelli" and the rest of the T-Birds kick off side two with "Prowlin'". The song is done in a typical guy-group style from the 60's with elements of doo-wop thrown in for good measure.

Tab Hunter, as the substitute biology teacher Mr. Stuart, attempts to teach a lesson with "Reproduction". However, the Q and A by the class turns it into still another double-entendre filled song. Once more, the lines do a guy-gal split, allowing the voices to blend easier and to again portray two viewpoints of the same subject (in this case, sex).

Maxwell Caulfield sings the introspective "Charades", where his character "Michael" wonders why he can't just be himself in order to win the girl of his dreams. The song isn't that bad and actually could have stood on its own outside of the film. I'm surprised it was never released as a single.

Michelle and Maxwell duet on "(Love Will) Turn Back the Hands of Time". In the film, it appears in a fantasy sequence in "Stephanie"'s mind. Given the part of the film and that she is singing it, I always get a little misty (even now thirty years later) whenever I hear it. Every. Single. Time. I guess it is a Pavlovian thing - condition and response - from my first viewing of the film.

The entire cast comes together for the final two songs on the album, which are also the final two numbers in the film. "Rock-A-Hula-Luau (Summer Is Coming)" is the party number to celebrate graduation. It has a bouncy rock and roll beat, taking elements from classic 60's California beach rock and sprinkling in some tropical elements to boot. "We'll Be Together" is a song of fond remembrances of the last four years and promises to always be friends. Given that this film came out just before my own Senior year of high school, the whole thing and this song in particular resonated with me.

I do not hide the fact that I love Grease 2, both the film and the soundtrack. I have from the moment I saw it in the theatres when it first debuted. Overall, I would say I love the sequel more than I love the original (at least in this film the actors playing the students were closer to high school age).

I've watched Grease 2 on cable dozens of times over. I owned it on VHS (which I watched dozens of times over) and I own it now on DVD (again, many viewings). I had the original soundtrack on vinyl and have since gotten it on CD. If I am in the mood for a pick-me-up, I'll either cue up the songs on my iPod or throw in the DVD (if I have two hours to spare). It is guaranteed to turn me back around.
Posted by Martin Maenza at 8:39 AM

I love, absolutely no doubt, Grease 2 more than Grease. It has a lot to do with Maxwell Caulfield. and I agree - Charades could have been a single. And I think Maxwell deserved more fame and more movies. this was his beginning and end...Colbys, Boys Next Door, Emmerdale Farm and Broadway, but everyone knows "Michael" from Grease 2 was gorgeous, but don't know Maxwell Caulfield. ya'know? it's too bad. I'm hoping he has a come back!

Julia, welcome to the blog and thank you for your comments. I appreciate them. I hope you'll stick around for my other musical reviews. I had forgotten that Maxwell was on "the Colbys".

I love your attitude about the film and the characters - and music. There are people that either love it or hate it and I find more that don't, unfortunately. You should call and give your views on the broadcast that Craig Bishop is going to do this weekend: http://www.blogtalkradio.com/retromoviechat/2011/05/08/grease-2-part-ii-with-tbird-leif-green#

I think I'm going to try to call. Especially since "Davey" is going to be there. haha.
I'm obsessed!

I might try to call in for Craig's show. I listened to the previous one last night. These are folks who really love the film - as I can tell you do as well.