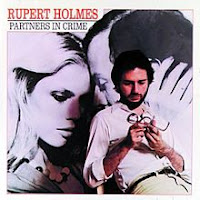 Welcome to another edition of “Seventies Saturday”.

The man who would eventual become known as Rupert Holmes was actually born in England to the name of David Goldstein. His father was an American Army Warrant Officer and bandleader; his English mother was also musically inclined. He attended the Manhattan School of Music. His brother was an opera singer. Suffice to say, music was in his blood.


By the early 70’s, Rupert was working as a session musician for such groups as the Cuff Links and the Buoys. He also wrote many tunes for the likes of Gene Pitney, the Platters, the Drifters, Wayne Newton, Dolly Parton, Barry Manilow, and the Partridge Family. He cut his first album in 1974, and some of his songs were later recorded by Barbra Streisand for the movie A Star Is Born.

On October 5th of 1979, Rupert Holmes released his fifth studio album Partners In Crime. Three singles from the record made it into the Billboard Top 40, including one that would end up being the final number 1 song of the decade.

Side one opens with the aforementioned number 1 smash “Escape (the Pina Colada Song)”. It was on the charts for sixteen weeks and held the top spot for the final three weeks of 1979. The song opens with a great musical hook before breaking into a structure of three verses and three choruses. The lyrics paint the story of a man who feels restless in his marriage and decides to answer a personal ad. Of course, in typical 70’s song tradition, the story ends with an interesting twist. It has a great message too - that couples just need to continue to communicate with one another.

“Partners In Crime” tells the story of two couples. One is a runaway girl and her pimp; the relationship is one of odd dependency. The other is that of a professional couple who meet at work; here the woman holds all the cards as his superior. It is about couples who stay together in a relationship even though it can be very harmful - because they have no other options.

“Nearsighted” is a tune about someone who is focused more on the one he loves rather than other things in the world around them.

“Lunch Hour” is a four-and-a-half ditty about people in New York City who use their mid-day break to hook up others for “nooners”. As a fifteen year old wrestling with raging hormones, the subject matter of this song was quite salacious. But, as this was 70’s pop music, the subject was handled in a veiled, inoffensive manner. And the music was pretty peppy too. The instrumental break before the final chorus has a jazzy feel to it. The song was released as the B-side to “Answering Machine”.

“Drop It” closes the side. The song has a nice swinging rhythm. It was the B-side to “Escape…”.

Side two opens with the second single from the record “Him”. The song was on the charts for twelve weeks in 1980 and made it all the way to the number 6 position. The lyrics tell the story of a man who discovers clues that his partner is having an affair with another, and he gives her an ultimatum - “it’s me or it’s him”. Of course, we’re left wondering what her final choice is.

“Answering Machine” was the third and final single from the record. It only stayed on the charts for three weeks, topping out at number 32. The story on this one is about a game of phone-tag, where a couple exchanges messages that end up running too long and are cut short by the beep.

The tempo slows down a little with the next track, “The People You Never Get To Love”. The song is about that moment where you see a stranger across the room, one that you fail to get the courage to approach and then never see again. It is about those “what might have been” relationships that never take that first step.

“Get Outta Yourself” is next. It was the B-side to “Him”. It too has a slower tempo to it that fits the song’s message well - that the woman needs to not spend so much time focusing on herself and involve herself with others too.

The album ends with “In You I Trust”. This one is a bit more up tempo. It speaks of how a love has pure faith in their relationship, more so than anything that is read in the media, the state of the economy, or the promises of politicians.

This record came out during my freshman year of high school. It was another one of those albums that I owned mostly through having purchased the 45 singles, and I would listen to the B-sides nearly as often as I did the A-sides. I found something very enjoyable about Holmes’ music. I had seen him perform the hits on the TV show circuit (Dinah Shore, Mike Douglas, Merv Griffin, and American Bandstand) and found him to be a very personable singer. These songs made a mark in my brain - the fact that in three-and-a-half to four minutes he could tell a great little story with his lyrics. The songs on this album are examples of why I found pop music of the 70’s so appealing.
Posted by Martin Maenza at 8:58 PM