Frankie Goes to Hollywood - Welcome to the Pleasuredome 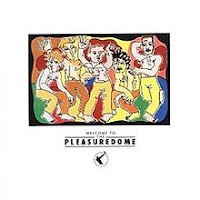 The British dance-pop band Frankie Goes to Hollywood did something rather ambitious for their 1984 debut album - they issued a double vinyl release. Usually something like that was seen only by seasoned artists a few records into their career at least, or for a live concert record. But for a debut, that was a very risky.

Lucky for the boys, the record was a commercial success. It scored in the top ten in most countries around the world (except for the US where it only peaked at number 33). It even placed number 1 on the album charts in their home UK and in New Zealand. Sales were fueled by two big singles that they had put out in the year prior to the album - “Relax” and “Two Tribes” were both dance club favorites.


Let’s break the disks down.

Side one (the “F” side) starts off with a trio of short tracks - “Well..” (a haunting overture) , “the World is My Oyster” (with ominous laugh) and “Snatch of Fury (Stay)” (another brief instrumental interlude).

The remainder of the side is devoted to the thirteen minute long “Welcome to the Pleasuredome”. The song opens with jungle birds and the echoes of “Ferry Cross the Mersey”. A dance rhythm then begins to rise up in the distance, building slowly with multiple layers. Finally the tribal chants join in as we arrive to our destination - the Pleasuredome! The lyrics were inspired by the poem Kubla Khan by Samuel Taylor Coleridge (written in 1797). They point out the dangers of a lifestyle that is full of debauchery. The final “Welcome!” at the end of this track reminds the listener that the journey has just begun. Three more sides await.

Side two (the “G” side) starts out with their hit “Relax”, which did well on the US Billboard charts (it peaked at 10 and spent ten weeks on the charts total). It did very well in the rest of the world, scoring a number 1 in the UK, Germany, Italy, and Switzerland; a number 2 in Norway, and a number 4 in Austria and Sweden. The song and its release draped in controversy - from risqué and overtly suggestive ads to sexually charged images for the picture disk. The lyrics too were full of in-your-face sexual references. But that’s perhaps why it was so popular with the younger generation. The craze of “Frankie Says…Relax” T-shirts were just another form of youthful rebellion to contrast the very preppy, buttoned-up styles that were also popular in the early 80’s. It is my favorite song on the album.

Next follows the band’s cover of the 1970 song by Edwin Starr - “War”. The original was an anti-Vietnam protest that was recorded by the Temptations. FGTH’s version is a funky, danceable take on the melodies, and it includes voice-over that sound very much like that of Ronald Reagan, the president of the United States at the time.

The other hit “Two Tribes” is next. Taken with the previous track, the band is clearly making a statement regarding the Cold War and the fear that the two sides (the US and Russia) could lead the world to global nuclear warfare. The video for this song further expanded on that theme. As for the song, I enjoyed its driving beat that, when blasted from club speakers, rocked the entire room into a dance frenzy.

The side ends with another short track “The Last Voice”. It is a musical interlude with some additional commentary on the political landscape.

Side three (the “T” side) begins with “Ferry (Go)”, a version of the 1964 Gerry and the Pacemakers song “Ferry Cross the Mersey”. I like this slowed down version with reverent singing and tolling church bells in the distance. There is an alternate version they did of the full song, which is also very beautiful.

Next is the band’s cover to Bruce Springsteen’s 1975 hit “Born to Run”. It explodes with the same energy as the original. I think they do a fine job with their rendition; it is my favorite of the cover tracks on the album.

Continuing the covers, they present “San Jose (The Way)” which was originally a hit for Dionne Warwick in 1968. It has a nice swinging-Sixties feel to it.

“Wish (The Lads Were Here)” is next. This original song has a good dance beat to it. It sounds a lot like something you’d hear by Haircut 100 or early Wham.

“The Ballad of 32” closes the side. It is a moody sounding instrumental, a nice change up from the earlier tracks.

The fourth side (the “H” side) begins with “Krisco Kisses”. I really like how the rhythm on this one builds up to the chorus which then cascades back down.

“Black Night White Light” slows things down a bit. To me, it has a little bit of a 70’s disco/R&B feel through out.

“The Only Star in Heaven” opens with a rap (much like George Michael in “Wham Rap” - so not really rap-rap per se). This one has a nice funky sound to it as well.

“The Power of Love” was the third single from the album. It is a pleasant piano ballad with some additional orchestration.

The side and the album go out with a “Bang”, another short track. Actually, it is another instrumental piece with the Reagan-voice repeating “Frankie say…” over and over.

I bought this album on vinyl in the Fall of my sophomore year in college, most likely at the House of Guitars record store in Rochester, NY. I had earned enough to by my first car that summer and thus had the Chevette when I returned to campus for that year. I often took my friends across town to the HoG for musical scavenger hunts (the store was huge with tons and tons of albums scattered through out).

Welcome to the Pleasuredome was on my to-buy list mostly because of the two big dance hits. I was right out on the floor, working up a sweat with everyone else as we danced to them. I recall I played them a lot - really playing side two (“G”) the most since they were there. I also tended to play the covers more than the original tracks - just because I knew those classic songs so well.

Having gotten the MP3s for this album a few years back, I find I like listening to the entire record now. I tend to appreciate what they were attempting to do with this debut as a whole. I think it holds up cohesively as a complete package.
Posted by Martin Maenza at 5:18 AM

Email ThisBlogThis!Share to TwitterShare to FacebookShare to Pinterest
Labels: 80's, Frankie Goes to Hollywood, music, Welcome to the Pleasuredome

This review makes me want to buy this record.

You listened to a lot of dance music back in the day. Was Bronski Beat one that was widely known? Or was that band too much in the gay community alone?

It occurs to me you might be cherrypicking from 1001 Albums...

I am following a good bit of the 1001 Albums, but I am sprinkling in others too. As for Bronski Beat, I am familiar with them. I'll add the suggestion to my growing list. It might take awhile to get there but I will get there. Thanks for reading.