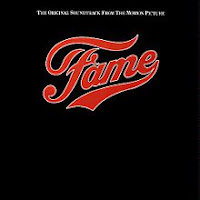 Welcome back for another edition of “Soundtrack Sunday”.

In the late Spring of 1980, MGM released Fame, the motion picture that told the story of a group of students as they progressed through their four years at the New York High School of the Performing Arts. It starred Irena Cara, Laura Dean, Lee Curreri, Paul McCrane, Barry Miller, Maureen Teefy and Gene Anthony Ray as the students, and Anne Meara, Albert Hague, Jim Moody and Debbie Allen as some teachers. Curreri, Ray, Hague and Allen would eventually go on to star in the hit TV version two years later, reprising their roles from the film.


The movie was rated R when it was released (due to some nudity but mostly profanity). I was fifteen at the time the film was released; still I’m pretty certain I saw it in the theatres with my cousin (she was a year and a half older than I). We lived in a small western NY town where both theatres and the drive-in were owned man. Since he was acquainted with our parents, he would tend to assume they knew what were seeing and sold us the tickets. It was a simpler time back then. For the record, our parents did know what we were seeing - no covert excursions to R-rated films going on there.

I know when the film came on HBO a year or so later, I probably watched it at least a couple dozen more times. Sometimes I would stay up very late on weekends to catch an after midnight showing. To say I loved the film would be a major understatement! It goes without saying that I own it on DVD as well.

As for the soundtrack which was released on May 16th of 1980, I had the album on vinyl. I played it incessantly, chiefly side one which was a quartet of solid songs through and through. When I played side two, I’d usually skip over the third and fourth tracks (my least favorites on the disk). Still, I consider it a decent soundtrack and one that reflected the film quite well. If you’ve never seen Fame, I strongly recommend it.

Side one starts with the title track "Fame", sung by Irene Cara. Its opening is a well-known guitar/synthesizer riff. Irene’s vocals are strong, inspiring. “Don’t you know who I am? Remember my name!” She owns it. The song actually appears a good way into the film, as Bruno’s cabbie father decides that everyone needs to hear his son’s music. The song was on the US Billboard Hot 100 for twelve weeks, peaking at number 4.

Next up is “Out Here On My Own”, a beautifully emotion ballad also sung by Cara. It has a wonderful piano accompaniment that compliments her voice perfectly. It is no wonder why this was the other song nominated for the Best Original Song Oscar. The song was on the US Billboard Hot 100 for nine weeks with a peak at number 19.

“Hot Lunch Jam” was featured in a cafeteria scene with students doing an impromptu jam session that explodes with dance and song. I really like the feel to this one - a very funky groove with a solid piano base and tons of energy. Cara lends the vocals here as well, singing about “macaroni and baloney, tuna fish - a favorite dish”. She also cautions “if its yellow then its Jell-O, if its blue it could be stew”. This one really gets you moving.

The side ends with “Dogs In the Yard” by Paul McCrane. I was a high school student like the kids in the film in 1980. I connected to this song; the lyrics seemed to speak to my soul. It was about breaking out of your shell and going out to do something wild and fun. That’s kind of the way I felt during those years - like I needed to be more than just this bookworm who studied all the time. I eventually took that advice to heart. Beautiful song.

Side two starts off with Linda Clifford and “Red Light”. It has a disco-R&B rhythm to it, very danceable with its grooves. The song was used in the film as part of dance number by the amazingly talented Gene Anthony Ray. This song is a perfect candidate for a dance play list, specifically because it isn‘t as over-exposed as other songs. That adds a freshness to the mix.

Paul McCrane is back again with “Is It Okay If I Call You Mine?” It is a uncomplicated number with just guitar and Paul’s voice. Yet, sometimes sheer simplicity delivers such intensity and sentiment. In a lot of ways, it is like a James Taylor song.

Next is “Never Alone”, performed by the Contemporary Gospel Chorus of the High School of Music and Art. The gospel genre helps reflect the diverse curriculum of school. Michael Gore, the composer of the film’s original score, provides an instrumental track “Ralph and Monty (Dressing Room Piano)”. The track was released as the B-side to the single for "Fame".

The album ends with “I Sing The Body Electric” which was part of the graduation performance in the film. Cara, McCrane and others in the cast collaborate on this one - a celebration of the various educational programs of the school (voice, music, dance). The title of the song shares the same name as a Ray Bradbury short story. It is a perfect ending to the album and the film.
Posted by Martin Maenza at 8:39 AM