Eurythmics - Sweet Dreams (Are Made of This) 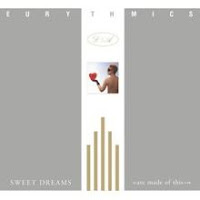 In January of 1983, the British duo Eurythmics (Annie Lennox and Dave Stewart) released their second album Sweet Dreams (Are Mad of This). Their first release was a commercial failure but this one did not follow suit. Thanks to some popular songs and amazing videos that were playing regularly on MTV, the album raced up the charts and became certified Gold the world over. The record went to number 15 on the US Billboard Hot 200, number 14 in Sweden, number 6 in Germany, number 4 in France, number 3 in the UK and number 2 in New Zealand.


Side one opens with “Love Is a Stranger”, a song that failed on its initial release as a single but did much better upon re-release later in 1983 (where it went to number 23 on the US Billboard Hot 200, number 20 in New Zealand, number 15 in Canada, number 12 in Germany, number 6 in the UK and number 4 in Ireland). The opening is beautifully haunting. The lyrics are interesting - extolling the virtues of the newness of love (how it is exciting, obsessive, tantalizing). Annie’s vocals show her powerful range and versatility, and Dave’s synthesizer hooks are instantly enrapturing (and I won’t even comment on his background “grunts” on this one…).

The opening of “I’ve Got an Angel” has a nice tribal, world-music feel to it. Annie shows off her lower register on this one with a chant to go with the entrancing rhythms.

“Wrap It Up” features Green Gartside, another British musician and front man of the band Scritti Politti. Folks might know this song by the cover done by the Fabulous Thunderbirds but it was originally written by Isaac Hayes and David Porter in the 1960’s. Dave’s synthesizers give it a funky beat. This is definitely a track I need to add to my music library as soon as possible.

“I Could Give You (A Mirror)” and “The Walk” round out the side with solid synth-pop precision. The first song is about how one fails to see how they’re interacting with someone they purpose to be in love with. The later has a nice horn section to supplement the rest of the instruments.

Side two begins with the title track. “Sweet Dreams (Are Made of This)” was the first single from the album which garnered the band their first and only US Billboard number 1 record. The song also went to number 9 in the Netherlands, number 8 in Switzerland, number 4 in Germany, number 1 in Canada and number 2 in Ireland, New Zealand and the UK. The opening instantly takes me back to 1983. However, I find it as engaging today as I did when I was back in high school. Annie’s vocals are full of emotion and anguish without being off-putting. Of course, everyone remembers the video for it - with Annie doing her gender-bending (but what was up with the cows?).

“Jennifer” has a more poignant tone to it. It is very simple in its execution - subtle background chords and Annie’s soft voice. Its quietness demands you focus on it, and you find you are.

It is a nice touch that “This Is the House” starts out with some Spanish and sprinkles more in later. The song has a steady beat with a horn line that punctuates it. Again, this is another of the deeper tracks that I’m interested in picking up now after hearing it.

“Somebody Told Me” explores a different sound, harsher and less polished. The vocals are rough and brusque. It isn’t what I think of when I think of the Eurythmics. It sort of doesn’t work for me. Ah well. Most albums have one of those songs, right?

“This City Never Sleeps” closes the side and the album. It is a slower number with more mood and texture. While a solid song, it is not one that jumps out to me as one I’d enjoy hearing often.

All in all, this is very good album. The pair has a deep knowledge of various musical styles and is willing to mix and match the elements in many ways to come up with interesting music. It might not be the type of music for everyone, but they do try to have something for everyone.
Posted by Martin Maenza at 6:11 AM

Martin very nice blog! I like the mention of "Sweet Dreams are Made of This." Classic song, guilty pleasure of ours. I see you're from Hickory, NC. I was recruited by a school down there. Do you get involved with any country music? We love our country up here in Connecticut. Please check our blog out, were also on twitter @itsFinewithArch. http://itsfinewitharch.blogspot.com/

We do a radio show every wednesday morning at 8:00 AM. You can check that out online at 91.9 WSLX. Look forward to hearing from you.

Jake, thanks for the comments. Appreciated. Which school were you recruited by?

As for country music, I do listen to some - old and some newer. My good friend from high school is a country artist - Sean Patrick McGraw (he is @seanpatrickmc on Twitter).

I'll definitely check your blog out. Thanks for the link.

Thanks for some quality points there. I am kind of new to online , so I printed this off to put in my file, any better way to go about keeping track of it then printing?

wow, does THAT take me back! This was one of the first albums I bought on cassette and I remember listening to it endlessly the year it came out. I was always intrigued by "Jennifer" and wondered if she was a drowning victim. I also remember thinking that 'This is the House' was a perfect song for my Champions character at that time--a little strange, a little exotic, definitely arresting. Thanks for bringing back some great memories, Martin!

Wow does this take me back! This particular album was one of the first I bought on cassette and I listened to it endlessly, envious of Annie's voice. I was intrigued by 'Jennifer' and wondered if she was a drowning victim, not realizing the song might have been metaphorical at the time, and I love the sounds of the Tube incorporated in the background of 'This City Never Sleeps' It's definitely a slice of my college years and I'll have to go dig it up sometime today for another listen. Thanks, Martin!