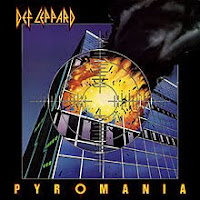 On January 20th of 1983, the British rock band Def Leppard released their third studio album entitled Pyromania. Phil Collen joined the band as a guitarist mid-way through the recording of this record (he replaced Pete Willis who had already laid down all the rhythm guitar tracks) “Mutt” Lange was the album’s producer.

Pyromania reached number 70 in Australia, number 26 in New Zealand, number 23 in Sweden, number 18 in the UK, number 4 in Canada and number 2 on the US Billboard Hot 200 charts. It ranked number 62 on Rolling Stone’s Top 100 Albums of the 80’s list and number 384 on Rolling Stone’s 500 Greatest Albums of All-Time list. Three songs from the album became Top 40 singles in the US.


The album begins with “Rock! Rock! (Till You Drop)”. As the lyrics state, anything goes - and the band shows they are here to give it all they’ve got. The song has a great guitar hook and a chorus that fans could easily chant while thrusting their fists in the air and bobbing their heads to Rick Allen’s drumbeats.

“Photograph” was the first single from the album and was on the US Billboard Hot 100 charts for nine weeks, peaking at number 12. It also went to number 66 in the UK, number 32 in Canada, and number 1 on the US Mainstream Rock charts. It opens with an amazing guitar riff and solid drum, a sound that would become a signature of the band. VH-1 used it in one of their pop-culture shows to introduce a segment of great air-guitar songs (this one is perfect for that). The song is still popular today, as evidenced by the use of it in the promotional ads for the 2007 film Blades of Glory. This song is synonymous with 80’s rock for me. When I hear it, I have to turn up the radio. It has a hard rocking edge but not too out-of-control, perfect for playing at just about any party or event.

Next up is “Stagefright” keeps the rocking going. The rapid-fire guitars on this one give it a high energy level.

“Too Late for Love” comes next; it stalled at number 86 on the UK charts but went to number 9 on the US Mainstream Rock charts. It opens with a howling wind and a haunting guitar. I love the effect it has to set the mood. Joe Elliot then comes in with equally distant vocals for the first verse. Then the rest of the band joins in. After the Top 40 singles, this is probably my next favorite track on the album. The ten second guitar solo at the 3:28 mark of the album version is very cool.

“Die Hard the Hunter” opens with amazing sound that evokes the images of the middle of a battlefield. The over six minutes long song is a hard-rocking ode to a soldier who has to adjust with civilian life after his tour of duty is over, and is the perfect end to a very solid first side of the record.

Side two opens with “Foolin’”, the third single from the album. It was on US the charts for a total of five weeks and peaked at number 28. It also went to number 42 in Canada and number 9 on the US Mainstream Rock charts. Once again, another great guitar opening with solo vocals on the opening verse before the song explodes. This is a song I get to sing when my son and I play Rock Band 3; I get to channel my inner-Elliot. It is hard to sit still when you’re performing it - you just have to throw your head back with the microphone so close to your mouth when you hit that “F-f-f-Foolin’!”

“Rock of Ages” was the second single from the album and matched “Photograph” for number of weeks on the US Billboard Hot 100 chart (it peaked at number 16). It went to number 41 in the UK, number 30 in Canada and number 1 on the US Mainstream Rock charts. It opens with probably the most repeated nonsensical German-like phrase in all of pop culture. It is the perfect audience participation song - from the hand-claps, to the ask-and-answer “what do you want?” - “I want rock ’n’ roll!” in the lyrics. Like “Photograph”, this is another one of the songs you want to crank it up and sing along to at the top of your lungs. And well you should!

“Comin’ Under Fire”, which rose to number 24 on the US Mainstream Rock charts and the B-side to the second single, is next. It continues the trend of solid opening riffs. And it holds its own after following the two hits previously. This is another one of those deep tracks that I enjoy a lot.

“Action! Not Words”, the B-side to the second single in the UK, goes to that subject that appears a lot in rock, a couple making a sex tape. But Def Leppard manages to approach it without getting vulgar, which is refreshing. It was the B-side of the “Photograph” single and thus got a lot of air-play on the album rock stations looking to flip the disc.

The album ends with “Billy’s Got a Gun”. It is a decent song; it has the feel and sound of the other songs. I guess for me it my least favorite of the ten tracks, which is not uncommon for the last track on the album. The distorted drum/synth for the last minute of the song kind of turns me off too (I don’t think it was needed).

While I had been familiar with the hit singles through lots of radio airplay during the Spring of my Senior year of high school and all that summer, I got a full exposure to the album and its deep tracks during my Freshmen year of college. My roommate that year, Steve, brought his stereo to our dorm room and with it this album. He was a big fan of the record and played it a lot, often when he was doing homework and studying. It must have worked - he was a really good student. If I hadn’t already been a fan of the band, Steve and this album would have convinced me.

This a classic 80’s rock album that everyone should at least listen to once; I would wholly recommend that you have a copy in music collection in some form (CD, cassette, MP3s, whatever). Pyromania showcases all of the elements that made Def Leppard a band loved the world over.
Posted by Martin Maenza at 5:19 AM

Great review. I think that "Foolin" is one of the greatest 80's rock songs, with its incorporation of three movements, and probably one of the most haunting intro's in music.

Thanks for the comments, 10DD. Always appreciated.