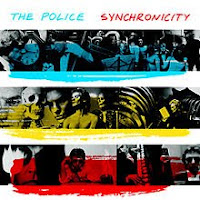 On June 1st of 1983, the Police released Synchronicity, their fifth and final studio album. Ironically, it was the most popular one by the group and included their first and only number one Billboard single. The album also took a stint at the top of the Billboard Album charts, briefly knocking down Michael Jackson’s Thriller. It won a Grammy for Best Rock Performance by a Duo or Group.


The multi-Platinum selling album charted at number 11 in Austria, number 6 in France, number 4 in Germany and Sweden, and number 2 in the Netherlands. It also went to number 1 in Australia, Canada, New Zealand, the UK and on the US Billboard Hot 200. Synchronicity also made it to a number of lists. VH1 named it the 50th greatest albums of all time. Rolling Stone ranked it as number 455 on their list of 500 Greatest Albums of All-Time and number 17 on their Top 100 Albums of the 1980’s list. Pitchfork Media ranked it number 55 in their list of 100 Greatest Albums of the 1980’s, while Q magazine placed it at number 25 in their list of 40 Best Albums of the ‘80’s.

The title of the album was inspired by Arthur Koestler’s The Roots of Coincidence, a book on the theories of parapsychology. This publication was influenced by the work of Carl Jung on the concepts of two or more unrelated events that end up occurring together in a meaningful way.

Side one starts out appropriately with “Synchronicity I”. The song has a melodic line that repeats throughout the entire song. This song explores the principles of Koestler and Jung with a steady, driving beat. Who said music can’t be educational? When one of the band members was a former teacher, what else do you expect?

“Walking in Your Footsteps” tries to draw a relationship between extinct dinosaurs and modern man equipped with nuclear weapons. This song has interesting rhythms that summon up the images of prehistoric times.

Next is “O My God”. This one has a jazz feel to it musically.

“Mother” was written by Andy Summers. It includes screaming vocals by Summers as well as a frenzied guitar. It sort of brings to mind Anthony Perkins and the movie Psycho. I’m honestly not a big fan of this track; it is my least favorite on the album.

“Miss Gradenko” was written by Stewart Copeland. It is a song about a woman involved in the Soviet government. I like the cascading guitar chords on this one and then how the drums support them.

The side ends with the bookend of “Synchronicity II”, the third single from the album; it charted at number 21 in Canada, number 17 in the UK, number 16 on the US Billboard Hot 100, and number 12 in Ireland. It managed to break into the top 20 of the Billboard charts (reaching number 16). The song uses a lot of audio feedback, making it one of the heaviest songs on the record. This song was played a lot at parties back in the day as it has a good beat to dance to.

The second side starts with “Every Breath You Take”, the first single from the album and the band’s only number 1 US Billboard single. It held that top spot for a total of eight weeks, dethroning Irene Cara’s “Flashdance…What a Feeling” and being knocked out by the Eurythmics’ “Sweet Dreams (Are Made of This)”. The single also charted at number 10 in France, number 8 in Germany, number 6 in New Zealand, number 3 in Italy and Spain, and number 1 in Canada, Ireland and the UK. What’s kind of funny is that they often played this for slow dances, but the lyrics are clearly about a stalker. It isn’t so much about love as it is about obsession.

“King of Pain” was the second single from the album, reaching all the way to number 3 on the US Billboard Hot 100; it also went to number 57 in Germany, number 17 in the UK, number 10 in France, and number 7 in Ireland. The opening music is haunting with its simple and repetitive piano chords. I love the lyrics on this - they paint some very striking imagery to represent loneliness and heartbreak. This is my favorite track from the record. Side note, this song was also the inspiration for Weird Al Yankovic’s parody “King of Suede”.

“Wrapped Around Your Finger” was the fourth single from the album and the final one released by the band. It cracked the top 10 of the Billboard charts, reaching number 8; it also went to number 32 in Germany, number 25 in Italy, number 22 in New Zealand, number 17 in the Netherlands, number 10 in Canada, number 7 in the UK, number 6 in France, number 2 in Spain and number 1 in Ireland. The opening of this one gets me swaying back and forth from the very first notes. The song takes a very cold, hard look at the institution of marriage. I am a big fan of the literary reference in the first verse - the mention of Greek mythological monsters Scylla and Charybdis.

“Tea in the Sahara” is the last track on the vinyl release. It has a quieter, moody feel to it. The lyrics tell the tale of three women who are tricked by a prince, who then leaves them in the desert to die.

“Murder By Numbers” was released as the B-side to the single “Every Breath You Take”. It was added to the CD and cassette releases of the album. It has a nice noir feel to it, with a swinging jazz style. The topic of the song is, of course, the crime of murder but Sting makes it sound of so simple and appealing.

I was in my freshmen year of college when this album was gaining popularity. My roommate Steve had this record in his collection and played it quite often. Because of that, I never really picked it up on vinyl - I could hear it as often as I wanted. In recent years, I’ve managed to fill in the deep tracks via digital downloads - to supplement those songs that appeared on the band’s greatest hits collection.

I am a big fan of Synchronicity - it is a strong album from beginning to end. The songs have an intellectual aspect to them without being too confusing or cryptic. The music is catchy, varied and memorable. If a band had to go out, why not go out on top with a huge selling record? That’s what the Police achieved with this album.
Posted by Martin Maenza at 5:13 AM

When I was in college in the mid 90s, one of the "cool" bands in my circle was The Police - cool like Rush or REM or Tom Petty or Pink Floyd might be to other circles of college kids. I never really got into them, though I did have a brief Sting period.

My best friend and I at the time instead preferred to sit in the dark smoking cigars or pipes, drinking beer or whiskey, and listening to Steely Dan. Some of my best memories of college.

I appreciate the feedback and the memories. College years are certainly a time where we get a lot of our music foundations set.

great call on the songs.

You have read mine, and probably know I read very deep into this album, and lived it. Masterpiece it is.