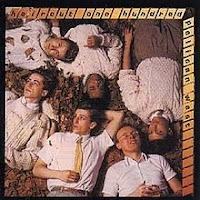 In 1980, the British pop group Haircut One Hundred formed. They played a number of gigs locally, with the roster slowly solidifying, before finally getting signed to Arista Records. By early 1982, their debut album Pelican West was ready to meet the world.


The album opens with “Favorite Shirt (Boy Meets Girl)” which reached number 4 in the UK. The guitar riff by Nick Heyward, Les Nemes and Graham Jones at the beginning is infectious, and the saxophone by Phil Smith packs a great punch. The dueling drums by Patrick David Hunt, Marc Fox and Blair Cunningham give it a wonderful rhythm.

Next up is their other big hit - “Love Plus One”. This one reached number 3 in the UK and number 37 on the Billboard Hot 100 charts. I love the xylophone on this one. It wasn’t something you heard every day in pop music, and it added to the whole Ska sound. The chorus is also instantly sing-along-able. This is easily my favorite song from the album.

“Lemon Firebrigade” has a nice little swing to it, even if the title of the song is a little out there. It is mostly an instrumental track though so, really, does the name matter too much. I like this one.

“Marine Boy” mixes a little jazzy piano into their Ska swing for a nice combination. “Milk Farm” stays more in the pop side of things, but that plucky rhythm keeps it moving at a good tempo. “Kingsize (You’re My Little Steam Whistle)” closes the side with another peppy number that is good to dance to.

Side two begins with “Fantastic Day”, which changes up the rhythms a little bit with good effect. It helps the song stand out a little bit more from the later half of the first side of the record. The guys really harmonize well together as this song (and others) show.

“Love’s Got Me in Triangles” has a good funky feel to it, with the rhythm guitar opening. “Surprise Me Again” is like a fresh breeze, light and airy.

“Calling Captain Autumn” brings the record to a close with another up-tempo rhythm. Like many of the other songs, the lyrics are very light-weight but that’s okay. Not all music has to make you think. Sometimes you just want some great rhythms to move to.

I was very familiar with the first two songs from this record, having heard them a lot on the local college radio station while I was still in high school. My older brother was off at college at the time, but when he came home at the end of that year he had a copy of this album on vinyl. It would be a number of years later before I got more into the deeper tracks from this record.

Overall, I enjoy listening to this record. It is like someone took me down to a tropical island and I’ve stumbled upon a great beach party with fruity rum drinks and bonfires. It’s good fun.
Posted by Martin Maenza at 5:18 AM

"Kite" is a standout track that sticks in my head to this day.

I love Heyward's "Whistle Down the Wind" from 1983. I'll have to look for that later album. I think I might have seen it on emusic.com before.