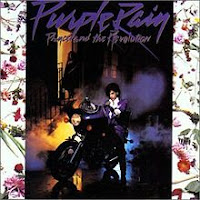 On June 25th of 1984, the film Purple Rain was released along with the accompanying soundtrack album by Prince and the Revolution. This was the sixth album by the multi-talented singer/songwriter from Minneapolis. It went to number 8 in Austria, number 7 in Switzerland and the UK, number 5 in Germany, number 4 in Norway, number 3 in Sweden and number 2 in New Zealand. It topped out at number 1 in Australia, Canada, the Netherlands, and in the US (on both the Billboard Album chart and the Billboard R&B chart).


Side one opens with “Let’s Go Crazy”, the second single from the album. It was also his second number 1 hit single on the US Billboard charts (the Hot 100, the R&B and the Dance charts). It also hit number 13 in New Zealand, number 11 in the Netherlands, number 10 in Australia, and number 2 in Canada. The song opens with a church-organ and a speech over it that brings up the image of a eulogy being given at a funeral. This is followed by a heavy drum rhythm that takes the song into a full rock number with guitars, bass and synthesizers. The lyrics preach that we can’t let life get us down, for when it does we need to “go crazy” and “punch a higher floor”. It is very much a song of empowerment. It is one of four songs from this record that I give a four-star rating to.

“Take Me with U” was the fifth and final single from the album; it went to number 40 on the US Billboard R&B chart, number 25 on the US Billboard Hot 100 and number 7 in the UK. The song is a duet between Prince and Apollonia Kotero, who co-starred in the film as well. It opens with a wonderful drum solo that is repeated again near the end of the song. The song also features finger symbols.

“The Beautiful Ones” is next. It starts out with keyboards by Dr. Fink and Prince singing in falsetto. The ballad builds in intensity and volume, with Prince eventually screaming his pleas to his lover. The song then closes quietly with keyboards and Bobby Z’s drums.

“Computer Blue” opens with non-emotional spoken lyrics by Wendy and Lisa. It then becomes a guitar-centric number in a screaming rock fashion. The musical execution on this one is very crisp, with machine-like accuracy.

“Darling Nikki”, with its raw guitar and methodic drumming, ends the side. This song was the subject of much controversy, thanks to its explicit lyrics about a sex fiend who seduces the singer. It was one of the songs identified specifically by Tipper Gore and the PMRC (Parents Music Resource Center) to illustrate the need for labeling on albums.

“When Doves Cry” begins side two with a screeching guitar solo. It was the first single from the album and the first number 1 hit for Prince in the US (on the Hot 100, the R&B and the Dance charts). The single also hit number 19 in Austria, number 18 in Sweden, number 17 in Switzerland, number 16 in Germany, number 10 in Norway, number 6 in the Netherlands, number 4 in the UK, number 2 in Ireland, and number 1 in Canada and Australia. It was actually the last song he wrote for the film and album. He did something different with this song; he stripped out the entire bass line from the track which was an uncommon thing to do for a dance-track. What he achieved was a very unique sounding record.

“Purple Rain” was the third single from the album, and it charted all the way to number 2 on the Billboard charts (it was blocked from the number 1 by “Wake Me Up Before You Go-Go” by Wham!). It also reached number 41 in Australia, number 16 in New Zealand, number 8 in Ireland and the UK, number 5 in Germany, Norway, Sweden and Switzerland, number 4 in Austria and on the US Billboard R&B chart, number 3 in Canada, and number 1 in the Netherlands. This nearly nine minute masterpiece combines so many styles- rock, pop, gospel and orchestral music - into a seamless package. It was recorded live for the album at a benefit concert that also was the first live debut of Wendy Melvoin as a member of the Revolution. It is one of those songs that you just have to experience in a darkened room with your headphones on - where you can let the music wash over you and you can feel the emotional energy it puts out.

There are also four B-side tracks that were released with the main singles from the record. Usually when the hits are so big, the flip sides of those singles tend to be forgettable. But not in this case. These four songs are all solid tunes and big fan favorites.

“17 Days” was the B-side of “When Doves Cry”. This dance track features a looping electric guitar along with synthesizer and drum machines. I really love the cascading chorus on it as well. It is a song about love loss and the feelings one experiences in those first few weeks after the break up.

“God” was the B-side of “Purple Rain”. This spiritual song features stunning piano playing and falsetto vocals by Prince.

“Another Lonely Christmas” was the B-side to “I Would Die 4 U”. Again, this is a song about loneliness, but where “17 Days” was about a lover leaving this one is about a lover dying on December 25th - thus no hope for a reconciliation. Prince fills the song with emotion as he recalls memories of the woman who has been out of his life for seven years now.

Back in October 2007, I blogged a bit about this one. Vanity Fair magazine had just named it number 1 on a list of top 50 movie soundtracks. In that post, I noted how much of a fan I am of this movie and album. I saw the film in the theatres in 1984, and have owned the film on both VHS and again on DVD. During my sophomore year of college, a friend who lived on the same dorm floor scored me the movie poster (he worked in a theatre in his hometown part-time and brought one back to me after winter break); that poster hung on my walls all through college and in my first apartment years after.

I’d be remiss if I didn’t mention the rest of the accolades Purple Rain has racked up over the years. Time magazine ranked it the 15th greatest album of all time in a 993 article. VH1 placed it at number 18 on their Greatest Rock and Roll Albums of All Time countdown. Rolling Stone magazine ranked it the second-best album of the 1980’s and 72nd on their list of the 500 Greatest Albums of All-Time. In 2008, Entertainment Weekly listed it at the number one spot on their list of the top 100 Best Albums of the past 25 years. It has also been listed at selling over 20 million copies world-wide.

I owned a copy of this album on vinyl, had made a copy on cassette to play on my first car’s stereo, and of course purchased it on CD short after getting my first disk player. I’ve listened to it dozens upon dozens of times over in the past twenty seven years. I know every song by heart (and thus I wouldn’t even have to listen to it again to blog about them - but I will any way since I LOVE this record).

I had the pleasure of experiencing all these songs live when the Purple Rain tour came through Buffalo NY in 1985. It was my first Prince concert and an incredible evening of performances. I’ve seen the concert video of this tour as well, but that can’t capture the feeling of being in a packed venue with thousands of other fans, singing the songs and feeding off the vibes. Especially during "Purple Rain" with everyone swaying back and forth, lighters blazing and held high, and a chorus of thousands in unison singing the "oooo oooo oooo oooo" refrain - that moment you just don't forget. It was a night to remember indeed.
Posted by Martin Maenza at 6:31 AM

Thanks for this review. Prince always shows up in my IPod night after night. Lets Go Crazy, I would Die 4 U, Purple Rain.

He went on to record many more amazing tracks.

This album was a moment in time when it came out. All the girls stopped listening to Michael Jackson, and started loving Prince

Prince shows up on my iPod a lot considering he's the most represented artist in my library. Glad to know I'm not alone is recognizing his talent. And, yes, you are right - this album was the one that got a lot of converts.