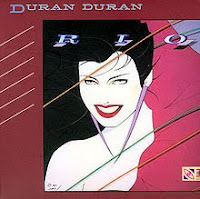 Released on May 10th, 1982, Rio was the second studio album by the British rock band Duran Duran. It was through this album that Simon LeBon, Nick Rhodes, John Taylor, Roger Taylor and Andy Taylor ("no relation" as they would say on Tiny Tunes Adventures) would become big stars in the US as they had done so the previous year in their native UK. The North American album was released in a number of versions, the later ones taking advantage of new mixes on a number of the singles that would further propel the songs up the US charts.


Side one opens with the title track "Rio", a single on the Billboard charts which peaked at number 14 in April of 1983. The video was a staple on the MTV rotation. I enjoy the saxophone solo that takes the spotlight in the later part of the song. The synthesizer on this one sets up a solid hook that carries the song ever forward.

Next up is "My Own Way" which opens with a nice rhythm to it. In the US release, the album used the Carnival mix which emphasized the dance style; in the American market they were marketed more as a dance band. The UK version is slightly slower but still very danceable. After listening to both back to back, I have to say I actually prefer the UK version of the song better.

"Lonely In Your Nightmare" is one of the deep cut tracks. I haven't heard it that much but I like it a lot. It has a moody feel to it, almost as if there is a stalker/voyeur element to it.

Of course, everyone knows "Hungry Like the Wolf", thanks to that famous music video that accompanied it (which played on MTV almost hourly back in the day when MTV was about videos). It is probably one of the first songs a person on the street would identify if you asked them to name a Duran Duran song. The single reached number 3 on the US Billboard charts. This one was a staple at our high school dances Senior year; the night would not be complete without hearing this song. For me, this song is also one of the first I was able to get my teenaged son to put on his iPod, in part thanks to the Rock Band video game (he plays guitar and I get to do my best Simon impersonation as I sing into the plastic microphone).

The side ends with "Hold Back the Rain". It fits in well with the other songs on this side - in fact, you can pick up traces of some of the musical cues of the hits in this one. I especially like the keyboards that dance in the background (kudos to Nick for them).

Side two opens with "New Religion" and its ominous intro. It is like I'm in an old European cathedral, and then it transitions into a space age feel. I enjoy the guitar work on this one a lot (it reminds me of Nile Rodgers of Chic). The layering of the vocals also has a nice effect on this song.

"Last Chance on the Stairway" has some traces of "Rio" to it, but what really jumps out to me is the xylophone sounds about two thirds of the way through. This is another of those deep tracks that didn't get as much play, but it is a solid song.

"Save A Prayer" is next. I really like the opening on this one, again setting a nice mood for the song to follow. The tempo is a nice change of pace at this point on the record. This song was often used for slow dance numbers in high school and college, allowing couples to get close after working up a sweat dancing to the fast numbers. Many a guy softly sang these lyrics while holding that hopefully-soon-to-be-special.

The album closes with "the Chauffer". The combination of the music and the lyrics on this one gives it an incredible sound. It is probably one of the more known non-single tracks from the album, often appearing in many live concert sets. I actually prefer this albums version to any of the live ones I've heard (like on Arena).

This is one of those early 80's records I wish I had bought on vinyl. I had a few of the singles on 45's and heard a few more thanks to the aforementioned Arena which I did have on vinyl. However, I can see why this album is often one of the favorites of the Duranies. I definitely plan to spring a few bucks to add the tracks I am missing to my digital music library.
Posted by Martin Maenza at 7:49 PM

This is wonderful blog. I love it.

Great Review! This is hands down one of my favorite albums of all time. The perfect mix of rock guitar, dance beats and dark synth undertones. You mentioned Nile, he actually went on to work with Duran Duran on their "Notorious" album.

I have this album on vinyl, it is great, I prefer the single version of "My Own Way" to the slower track on the album, but I do still like the album version.

and again, great review. Mine is coming soon!
10DD

Such a fantastic band -- way better than they get credit for being.