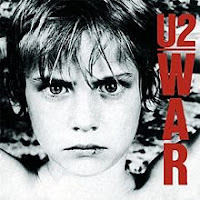 On February 28th, 1983 (just five days after my eighteenth birthday) U2 released their third studio album War. The songs on it and the album title were a statement that the Irish rock band was making about how they perceived the world to be at the time.

In the US, the album reached number 12 on the Billboard Hot 200 album charts. Over in the UK, the record knocked Michael Jackson’s Thriller from its number 1 perch. It also charted at number 59 in Germany, number 26 in Finland, number 16 in Ireland, number 15 in Norway, number 5 in New Zealand, number 4 in France and Canada, and number 2 in Sweden. Rolling Stone magazine ranked War number 221 on their 500 Greatest Albums of All-Time list and number 40 in their Top 100 Albums of the 1980’s.


“Sunday Bloody Sunday” opens the album. It was the third single released from this record, charting at number 14 in Belgium and number 7 on the US Mainstream Rock charts. The song opens with a military march beat, a stark contrast to the protest lyrics that describe the devastation in Northern Ireland on January 30th, 1972. Bono and the boys were hardly the first artists to use song to address the events. John Lennon and Paul McCartney had both made reference to the events in song previously.

“Seconds” too has a military beat to it as the lyrics outline how in just seconds the world could change with Armageddon. The proliferation of nuclear weapons was a political hot point by the late 70’s and early 80’s. The Edge takes the lead vocals on this song.

“New Year’s Day” was the first single from the album, reaching the top 10 in the UK and number 2 in Ireland; it only reaching number 53 on the US Billboard charts (it did hit number 2 on the US Mainstream Rock charts though). This song about the Polish solidarity movement has a memorable Adam Clayton bass line to it, making it one of the most known and popular songs by the band. This is one of my favorite songs from this album.

“Like a Song…” has a bit more of a punk attitude to it. It is a song about rebellion and standing up for those things that are important. Once again, the song has driving drum beats delivered flawlessly by Larry Mullen Jr.

“Drowning Man” ends the side with a bit of quietness. The song is one of support, of being there to stand side-by-side in times of need. The guitar work and electric violin compliment Bono’s vocals very nicely on this one.

“The Refugee” starts off side two with a bit of a tribal rhythm. Of the deep tracks from this album, this one rises to the top of that. I like how it moves and flows.

“Two Hearts Beat as One” was the second single from the album. While it failed to make much of a splash on the US Billboard single charts (number 101), it reached number 18 in the UK and number 2 on the Irish charts. Once again, we have another track with a moving bass line and solid drum beat. The song deviates from the earlier themes by focusing mostly on love.

“Red Light” is a song about the emptiness of prostitution. Kenny Fradley’s trumpet on this one adds to the imagery. The Coconuts provide backing vocals on this song as well as the next one.

“Surrender” has a nice haunting chorus to it, consisting of just the one word repeated over and over again. It is a simple thing to do but it is makes for a memorable part of the song.

The album ends with “40”. The first verse of the song is based on a passage from the Bible - Psalm 40:1-2 and the second verse is based on Psalm 40:2-3. Those lines are: I waited patiently for the Lord; and he inclined unto me, and heard my cry. He brought me up also out of a horrible pit, of the miry clay, and set my feet upon a rock, and established my goings. And he hath put a new song in my mouth, even praise unto our God: many shall see it, and fear, and shall trust in the Lord.

This album came out during the later half of my senior year of high school, and it was very popular through out my freshman year of college. The songs were played in heavy rotation both on the album oriented rock stations as well as the college radio stations, allowing the record to achieve maximum penetration in the music circles.

Listening to all ten of these tracks today, it still sounds as contemporary and relevant as it did twenty eight years ago. It is easy to see why this one is a true rock classic.
Posted by Martin Maenza at 5:14 AM

I always appreciate how you put your record reviews in context in your life. How about doing Journey' Escape or Frontiers, Foreigner 4, or Crue's Shout at the Devil?

All four of those suggested albums are certainly candidates (I have all four). I'll put them on my list to do in the future. Thanks for suggesting them - and thanks for the comments. Always appreciated.