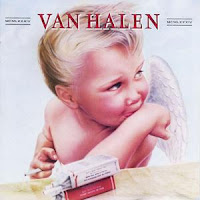 1984 was both the name of and the release year for Van Halen’s sixth studio album, released on January 9 of that year. It was one of the band’s most popular records to date (both in chart performance and sales). It peaked on the Billboard album charts at number 2 (blocked by Michael Jackson’s Thriller). It also produced three top 20 hits singles and the band’s first (and only to date) number 1 hit single. The album was ranked number 81 in Rolling Stone magazine’s top 100 Albums of the 1980’s; it also appears on the 1001 Albums list.


Sadly, 1984 was marked as the end of an era. It was the last Van Halen album that David Lee Roth would be featured on before he left the group, a year later, to embark on a solo career.

The title track opens the first side of the album. Although only a minute or so long, “1984” features Eddie Van Halen, well-known for his guitar mastery, showing off his piano skills on synthesizer. This musical intro was often played together with the next track on album oriented rock stations as they flowed together well.

The opening synthesizer of “Jump” heralds in a new sound to the hard rocking band; it is instantly recognizable. However, it was this change in musical styles that helped further crack the relations between Eddie and Dave, the later noting that he was against the band adopting the synth sound that was becoming so prominent in early 80’s music. The record buying population didn’t quite agree. As the first single released from the album, it spent fifteen weeks on the US Billboard Hot 100 with five of those weeks at the number 1 spot. It is so popular even today that the song was performed by the cast in a season 1 episode of Glee in 2009.

“Panama” was the third single released from the album; it went to number 13 on the US Billboard Hot 100 and number 2 on the US Mainstream Rock chart. The song has a classic guitar heavy sound. The suggestive lyrics are in fact all about a car, one that Dave saw in a race while in Las Vegas. The bridge of the song is amazing and one of the rock classics from this era.

“Top Jimmy” is an ode to a swinging musician. This song stylistically is more like what David would eventually start doing when he went solo.

“Drop Dead Legs” is a little slower of a groove that pays homage to a great pair…of legs.

Side two kicks off with “Hot For Teacher”, a single that failed to break the top 40 (it stalled at number 56). It did, however, go to number 24 on the US Mainstream Rock chart. The video for this song was quite memorable - featuring a school setting that breaks into a stripper celebration. It was every school boy’s fantasy (or at least that’s what the band thought). The drum solo by Alex Van Halen that opens this one is incredible, and the guitar work by Michael Anthony and Eddie is equally scorching.

“I’ll Wait”, the second single from the album, also features heavy keyboards and a synth bass line. Like “Jump”, this one was a sore spot for David who never wanted it included on the record (clearly he lost that battle). The lyrics were inspired by a Calvin Klein print ad where a woman is shown wearing men’s underwear. Chartwise, it went to number 13 on the US Billboard Hot 100 and number 2 on the Mainstream Rock chart.

“Girl Gone Bad” is next. It again features strong guitar licks and Dave’s signature sing-screams that made the band a rock favorite.

The album ends with “House of Pain”. The rapid fire guitar work on this one, and many of the other tracks, amazes me. This is what typifies guitar-rock of the late 70’s and early 80’s for me.

My freshmen year of college roommate Steve was the one who introduced me to this album. This was another one of those he had in his collection and often played on his turntable in our dorm room. I knew the hits quite well - they were go-to favorites at many of the parties I went to around campus for about a year or so. “Jump” and “Panama” were guaranteed to get the party kicked into overdrive.

I think the record holds up fairly well after all this time. The tracks feature signature Van Halen sound, and this record clearly represents the transition point between what had come before that year and what would come after when Sammy Hagar stepped up to try and fill Dave’s boots.
Posted by Martin Maenza at 5:14 AM

“Jump” and “Panama” were guaranteed to get the party kicked into overdrive.

Thanks! Another album I never owned, but the songs I know so well!

A fantastic record, and another triumphant review! I used to think Van Hagar was a better band musically -- and maybe they do make better "art". But DLR is so the man when singing with these guys (and on Eat Em and Smile). I can't help but prefer it.

I remember when Stryper's "Against the Law" record came out. They have a song on there called "not that kind of guy" which is basically ripped off of Hot for Teacher. It's shocking how alike the songs sound.

Thanks, guys. I appreciate the feedback.

10DD, there are definite "must-haves" from this album. Many of those you can get from a greatest hits collection but some also are necessary otherwise.

Hatter, I think you're right - Van Hagar was about "art". But the DLR years were about full on party. I had a buddy who listened to Stryper - I don't think I've heard that song before though. Will need to look for it to see how it sounds.