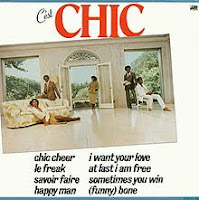 Welcome to another edition of Seventies Saturday. This album review is dedicated to Nile Rodgers (@nilerodgers on Twitter), who every day celebrates the joys of living in his blog Walking On Planet C.

When Chic’s second album C’ est Chic came out on August 11th of 1978, I was in Junior High School (about to start 8th grade that September). As a card-carrying disco-fanatic, I went to my share of after school disco dances that year; and the big hits from this record were part of the play lists at every one of them. I mentioned previously about my brother and I going in on a record club membership. Well, one of the albums I got from the club was C’ est Chic. I played that vinyl a lot during those years.


Last week I was filling out an order at Amazon.com and needed something to push me over the top to get free shipping. I realized that this album was not fully present in my digital library, so with one click it was added to the cart. The package arrived this week, just in time to prepare today’s blog post. I’m so looking forward to hearing this album in its entirety again.

“Chic Cheer” kicks of side one with audience applause. Ah, just listening to this once more takes me back to my youth; I‘m in my room practicing my dance steps. I love it. Bernard Edwards and Nile really know how to lay down the groove, don’t they?

“Le Freak” was the first single from the album and the first number 1 hit for the group. It held that top spot on the US Billboard Hot 100 charts for six weeks total (though it wasn‘t six consecutive weeks - it actually held the number one spot different three times in late 1978 and early 1979). This is a song I’ve heard many times over the decades, and it still brightens my mood instantly with those opening chords. Back in the day, I had heard of Studio 54, but only by name and not reputation. This song always makes me think of packed clubs, with everyone having a great time under the giant, spinning glitter ball above the dance floor.

“Savoir Faire” is a nice slow jam instrumental, very lush in composition. The guitar work on this one is amazing.

“Happy Man” rounds out the first half of the album. This song is full of positive energy. Listening to this one, I can sense that it would mix really well with Sister Sledge’s “We Are Family”; both songs have a similar foundation to them that they build upon. No surprise though since Bernard and Nile wrote all the tracks for that group’s 1979 album.

The second single from the album, “I Want Your Love”, starts the second side. This song made it into the top 10 on Billboard’s US charts, going up to position number seven. The tubular bells used on this one are unforgettable. This is my favorite track from the record, especially with this album version which runs to almost seven minutes in length. You really can get lost in the music.

Next up is “At Last I Am Free” which runs slightly more than seven minutes. This is another beautiful slow jam. It is the type of song that takes away all the stresses of the day, a release - much like that which the singer is expressing about being free from a deluding relationship.

“Sometimes You Win” delivers some great advice for life, backed by a solid dance beat. Life is all about taking chances. Who knows how it’ll turn out? But you can’t win if you don’t try.

The album finishes up with “(Funny) Bone”, another solid instrumental track. The orchestration on this song, like the rest of the album, is top notch. I always love disco songs that include lush strings and horns to go with the percussion and guitars.

C’ est Chic reached number 4 on the US Billboard Hot 200 album charts and scored the number 1 spot on the US Billboard R&B charts. “Le Freak” was the label’s best selling single ever. The album is on the 1001 Albums You Must Hear Before You Die list and rightfully so. The record is a musical masterpiece. I’m very happy to have owned it back in the day and once again today
Posted by Martin Maenza at 8:28 AM