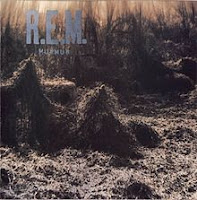 On April 13th of 1983, a quartet of musicians (Bill Berry, Peter Buck, Mike Mills and Michael Stipe) came up from Athens, GA, to Reflection Studios in Charlotte, NC (not far from here) to record their debut album - Murmur. It charted at number 100 in the UK, number 47 in New Zealand and number 36 on the US Billboard Hot 200.


The record, with its defining sound, drew much critical acclaim upon its release. Rolling Stone awarded it four out of five stars and ranked it the Best Album of 1983 (beating out the likes of Michael Jackson’s Thriller, the Police’s Synchronicity and U2‘s War). RS ranked the album number 8 in their Top 100 Albums of the 80’s list, and number 197 on their 500 Greatest Albums of All-Time list.

Side one opens with “Radio Free Europe”, a song you really need to listen to very closely to discern the lyrics. In fact, this was kind of intentional. When Stipe developed the song, the first lyrics were hard to understand on purpose (he hadn’t figured out all the lyrics yet). This probably made it an often requested song on college radio stations - so the listeners could get another stab at following along. It was the first single from the album. When it is performed live, he would often improvise his own set of lyrics halfway through the song.

“Pilgrimage” has an amazing piano refrain that I like a lot. The use of drums is also interesting in this one. The song is the first of many songs the band would do that touched on the topic of religion.

“Laughing” sounds a bit to me like some early Police songs at the start, but it develops its own sound as it continues. Laocoon and his sons refers characters from a Greek play by Sophocles. They are also the subject of a famous marble sculpture. Could the lyrics be some kind of commentary on the band’s “art” (their music)?

“Talk About the Passion” was the album’s second single. It is a song about hunger in the world, though it does so without being obvious in a major way. It is done so, like many R.E.M. songs, in a way that makes you think.

“Moral Kiosk” has some very interesting guitar sounds to it. The Horae mentioned in the lyrics also refers to Greek mythology. They were the goddesses of the seasons. This further goes to illustrate that R.E.M. was very much a thinking-person’s alternative music, which is likely one of the reasons the band was so popular with college students.

“Perfect Circle” ends side one. I’ll be honest - the lyrics kind of have me at a loss. I can’t really put my finger on them, even when I am reading them along as the song plays. I guess it can be interpreted in different ways. Clearly it is a personal kind of song.

“Catapult” launches us into side two with a jangley guitar sound which I find very pleasant. Like the previous song, this one requires multiple listens to absorb and decipher.

“Sitting Still” is very much a stream-of-conscious type of song. The way the lyrics are laid out, sometimes with a single word or two on a line - very poetic in form. But the music gives no hint of the chaos; the melodies are upbeat and flowing. A nice juxtaposition of two styles that works well.

I like that the second line of “9-9” is ‘now what does that mean?’ - I’m wondering the same thing myself about a lot these lyrics. Too funny. I think Stipe is messing with me here. The song touches a little on religion again with the Lord’s Prayer clearly present, with a twist.

“Shaking Through” has some interesting imagery, specifically the four-times repeated yellow geisha gown. Still, again, I’m lost as to the overall meaning.

“We Walk” goes in a totally different direction musically. It almost has a Lennon/McCartney feel to it. I’m not completely sure who Marat is in this one. Is it Jean-Paul Marat, the Swiss-born scientist and physician and noted character in the French Revolution?

The album concludes “West of the Fields”. Elysian refers to Greek mythology once more as Eysium was a section of the Underworld. The fields were the final resting places of the souls of the heroic and virtuous.

Other than the singles that appear on greatest hits collections, I was not all that familiar with Murmur. In listening to it all the way through from beginning to end for the first time tonight, I found it an enjoyable listen even if I was often bewildered by the words. Clearly the guys from R.E.M. are way smarter and well-versed than I ever was (or even might be), but that is not a bad thing at all. Sometimes more complex and thought provoking music is just what one needs to get the old brain synapses firing. This is one I’ll definitely need to revisit in the future.
Posted by Martin Maenza at 5:25 AM

This is a great review Martin. Now, I want to go and buy the album and listen to it. Who knows? I may have a Weekend Showcase for R.E.M sometime in the future.

Have you not listened to it before? I had not heard it all the way through until just this week. I definitely prefer later R.E.M. to this debut, but the debut is pretty good.

Thanks for this review. REM's "Automatic for the People" album is on my list of greatest of all time, and I have many of their other records, but unfortunately I must admit I have never heard "Murmur" except for a couple songs. I am going to give it a spin today. cheers.

Just to clarify...when I wrote "Automatic for the People" album is on my list of greatest of all time,"
I meant it is somewhere on my list of top albums of all time, not my #1 but certainly excellent. With that settled, I am listening to "Murmur" right now. Really good. I always thought the album cover was really interesting. It looks like an overgrown but dead ground covering of kudzu. Growing up in the Southeast US I know it is commonplace. Anyway, great album. I am trying to put myself back in 1983 to realize the context of the musical climate when this was released. I detect the 'trendy at the time' rapid new wave drum pattern at times, but one can really feel the early root sound of what would become a hugely successful band. This album was certainly very different than much of what was popular when it recorded.

I found a CD on Amazon I wanted to order and I'm too cheap to pay shipping. So, to get my order up to $25 I decided to order Murmur. My wife is a big R.E.M. fan and we have most of their other CDs. I figured I might as well get this one, then burn it into my iTune library. Maybe if I listen to it over and over again I might be able to find a clue. LOL.