The The - Soul Mining 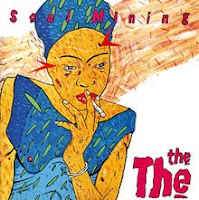 Soul Mining, released in 1983, was the debut album from the British band The The, fronted by Matt Johnson. While the band was popular in their home country, putting three singles up on the UK charts, their success didn’t translate as well in the States. Mostly their music could be heard on college radio stations that tended to showcase more alternative music.

I had actually forgotten about some of the songs on this album that I did know until about a year or so ago. My buddy Aaron in the state of Washington mentioned them, leading me to seek out the music to add to my library. That was really the first time I had listened to the whole album. Since then, it has come up a few times on my iPod album shuffling.


Side one opens with the rocket launch and a steady drum beat of “I’ve Been Waiting for Tomorrow (All of My Life)”. The rhythm moves this one, with the other instruments and the vocals supplementing it. It has a little bit of a Soft Cell feel to it, perhaps a little more angst-filled, but it really works for me. It is a nice start to the record.

“This is the Day” is one of the two songs I remembered from decades back. It contrasts to the first track nicely - this one being a much more pop-like, pleasant sounding song. I love the music on this one - the blend of strings and synthesizers. It is a song about new beginnings, about starting over. Side note: famous 80’s disc jockey Richard Blade now on the 1st Wave channel on Sirius/XM starts his afternoon show everyday with a segment called “This is the Day”, taking its name from this song.

“The Sinking Feeling” is back to the darker lyrics, but it is contrasted by the music which still has an upbeat feel (but not nearly as sunshiny as the last song). The songs so far are nice and varied, making for an interesting album to listen to.

“Uncertain Smile” is the other song I remembered fondly from my past. I’m pretty sure there was a video of this that played on MTV a lot in the early days of the channel. The more positive, sweeping music is back again. The singer reflects upon someone from his past, someone he’s never really gotten completely out of his system. The imagery the lyrics paints is amazing.

Side two starts with “The Twilight Hour” which has yet another interesting opening, one with a sort of a middle-east-meets-tribal-drums sound. In fact, the varying sounds on this one come together in an interesting way. I like this song a lot as well.

“Soul Mining” has a nice, moody feel to it (both musically and lyrically). While not a major standout for me, it is certainly not a song I’d end up skipping over. It works well for background listening while doing other things.

“Giant” has a cascading synth opening. The lyrics once again paint some interesting pictures. The rest of the music on this one is solid too. It all comes together well for this nine and a half minute composition.

The album in the UK ended with the above track. On the US vinyl release and later CD releases, the band added “Perfect” on request of the label (they felt that seven songs was not enough for an album). Once again, this song has an interesting contrast between the lyrics and the music which works very well.

If you’ve never heard this album, I’d recommend you find it online and give it a listen. It is one of the albums on the “1001 Albums You Should Hear Before You Die” list. I agree with the list - it is definitely worth a spin.
Posted by Martin Maenza at 5:25 AM

Yes, The The. Good stuff. "Uncertain Smile" is a great track. Many times, as I sit out in the sun and can't decide what music to play, I fire up that song and it always works.

For those unfamiliar with The The, a great place to start (as well as this album) is the greatest hits compilation "45 RPM".

I have their 1986 album Infected as well. I need to scope out the Greatest Hits collection to see what I might be missing.